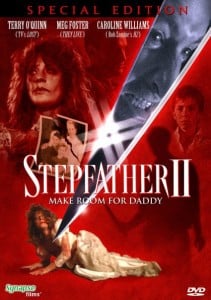 The Stepfather, one of the most effective psychological thrillers made in the early 80’s, may have been a flop in theaters, but it found a second life on cable and videocassette, gaining enough of a cult following to result in a sequel. The original Stepfather was a complex thriller about a man whose quest for perfection leads him to murder his family and try to start fresh with another. Stepfather 2 definitely follows the same formula, but focuses on the courtship leading up to the marriage rather than  the marriage itself.

It begins with an opening montage, recapping  the end of the first film. we learn that Daddy Dearest, a.k.a. Gerald Blake, a.k.a the stepfather, survived the bullet and knife wounds from the end of the original.  Played once again by Terry O’Quinn, Blake is now an inmate in a mental hospital. He breaks out, killing several innocent bystanders along the way, and soon settles in a new neighborhood. There, he takes on a new identity as a psychiatrist dealing with, surprise surprise,  family problems, and soon falls in love with Carol (Meg Foster). Unfortunately Carol comes with a meddling ex-husband, and a snoopy best friend who, while playing detective, discover that Dr. Gene Clifford is not quite who he says he is. Director Jeff Burr (Puppet Master 4, Puppet Master 5, Letherface) brings little atmosphere or suspense to the project, instead cranking up the violence and the gore and settling for a darkly comic, tongue-in-cheek (but rarely clever) slasher film. The script for Stepfather II sadly replays all the twists and turns of the original, and does nothing to expand its characters (aside from a touch of insight into the Stepfather’s twisted mind) and unfortunately all the surprises that made the first film so effective are no longer here.

Still, the film isn’t a complete waste of time for genre fans. It’s an adequate sequel, mostly due to Terry O’Quinn’s fabulous reprisal of his role. The rest of the cast is mostly appealing. Meg Foster brings a quiet sensual feel to her character and Jonathan Brandis, as her son Todd, pulls out a surprisingly good performance. Jim Manzie’s score is well suited to the film’s style; subtle and calm, but mounting the tension at just the right moments. And cinematographer Jacek Laskus does a wonderful job giving suburbia an unsettling, unsafe look.

Overall the film is a mixed bag that, in many respects, doesn’t match the suspense and terror of the original film. But horror fans still might find something to enjoy.