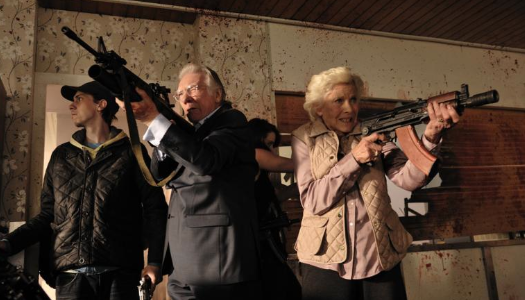 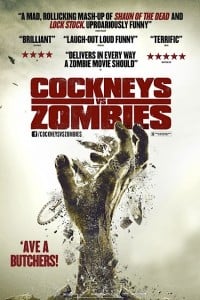 The film is set in London’s East End, obviously, where a zombie outbreak threatens to take over the entire city. Meanwhile, and unbeknownst to them, a team of well meaning bank robbers led by brothers Andy and Terry (Harry Treadaway and Rasmus Hardiker), with the help of their cousin Katy (Michelle Ryan), steel-plated psychopath Mental Mickey (Ashley Thomas), and probable-virgin Tuppence (Jack Doolan), steal ₤2.5 million in order to save their grandfather’s old folks home from being knocked down. As the zombies grow in number, Andy and Terry lead an expedition of sorts to save their granddad (Alan Ford); who, along with a group of senior citizens, is defending the old folks home from an incoming zombie horde.

The title might sound like it was formulated by a cheeky attempt at Cockney slang, but there’s a lot more to it than just a couple of keywords. At the heart of Cockneys vs. Zombies is a story about the urban decay of the East End, the city’s bureaucratic attempt to ‘beautify’ and reshape the area, the lack of care and attention paid to old age pensioners and citizens as a whole, and the general loss of culture and tradition in a culturally traditional part of London; this point is brought up at the beginning (construction site), middle (at the old folks home), and the end (on the boat) of the film. The zombies represent all of these ideas, and the characters aim to strike them down in a distinctly Cockney approach to conflict resolution.

This dimension adds some food for thought if you really want it, but anyone going to see Cockneys vs. Zombies will be looking for either or, and the film provides both in spades. The zombies and kills are top-notch, with some imaginative use of their abilities/disabilities, distinct British humour (i.e. football), clever and amusing flashback sequences, and strong performances overall; especially on the part of the hard nut Alan Ford. If you threw Danny Boyle’s 28 Days Later into Guy Ritchie’s Snatch (pun much intended), you’d have an unlikely and crowd-pleasing synthesis of the two in Cockneys vs. Zombies.