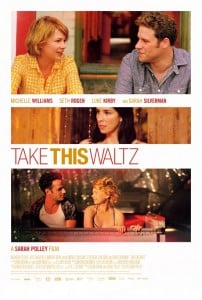 Actress, writer, producer, director, Sarah Polley can apparently do it all. Ever since her touching, memorable performance in Atom Egoyan’s The Sweet Hereafter, she has earned her place within the film industry on both sides of the Canadian-American borders. Her work is eclectic to the point of having appeared in Zack Snyder’s Dawn of the Dead remake to having directed one of 2006’s most beloved dramas, Away From Her. For Take This Waltz, she returns to the director’s chair, casting some relatively big name actors and comedians, the likes of fellow Canadian Seth Rogen and American indie darling Michelle Williams. She has proven in the past to have a delicate touch when it comes to drama, so what could go wrong?

Even though the fellow has a few high profile names attached to it, Sarah Polley is really interested in telling the story of Margot (Michelle Williams), a quirky little woman, apparently employed by Parks Canada even though we never actually see her at work, married to aspiring cook book chef Lou (Seth Rogen), who specializes in chicken recipes, which equates to them eating lots and lots of chicken. Margot takes a quick holiday to the east coast to visit some historical sites, during which time she comes across a handsome looking man named Daniel (Luke Kirby) who clearly has an eye for her. Fate operates in funny ways sometimes, as the two happen to share neighbouring seats on the same flight back to Toronto, only to take same cab back to the same neighbourhood and…back to the same street! Daniel, in fact, lives just across the street from where Margot and Lou are situated, and while she does find him attractive and curious, having him so near on a daily basis might make life a bit uncomfortable. Despite that she would rather not deal with his presence, the fact of the matter is that Daniel thinks very highly of Margot, continuously teasing her romantically. How long will she be able to resist, provided she is convinced she has anything to return at all? ‘The end result is a film which ostensibly delivers on most of its promises, meaning that depending on what one wants, one will either come away very satisfied or understand why this is not their cup of tea, so to speak.’

For all those who did not see the picture at last year’s Toronto International Film Festival or the other few events it played at late last year and in early 2012, the wait has been a long one for Sarah Polley’s latest, especially for her supporters and the legions (that does not even seem to be an exaggeration) of Michelle Williams fans. Canadian and American indie royalty finally coming together to make a simple enough film mixing some drama, romance with a dash of comedy. The end result is a film which ostensibly delivers on most of its promises, meaning that depending on what one wants, one will either come away very satisfied or understand why this is not their cup of tea, so to speak. More drama than comedy, Waltz is tinged with a hint of quirk that separates itself from simple drama. The quirk, while rarely overtly comedic, seems to serve the purpose of giving the picture a hybrid identity. The emotions experienced by the characters are real and meant to elicit empathy from the audience, yet some of the circumstances under which they occur denote that the world of the film is one in which anything can happen. The mere fact that two neighbours attracted towards one another never knew each existed until they individually took a vacation halfway across the country is a testament to that. The slowly evolving discovery of the proximity of their living quarters is not exactly played for laughs, but it is supposed to come off as on the sillier side of things.

Probably the two most impressive aspects to Polley’s movie are, first, the challenges it throws to the audience, especially those who may be going in with the expectations that the road towards romantic fulfilment will be as easy as it is in so many other films and, second, Seth Rogen. That is correct dear readers, the oft-criticized comedic actor, although not the true star of the film (he even gets a bit less screen time than Luke Kirby), delivers an emotionally honest performance flavoured with only a few droplets of his ordinary raunchy behaviour. For all intents and purposes, it is as though the Seth Rogen characters from his other films did not entirely let go of their sense of humour, but nevertheless grew into a sense of maturity and felt more three-dimensional all of a sudden. When attempting to be funny, the actor delivers, as does he when the script requires the more difficult, somber moments. Judging by the overall sentiment towards him on the internet over the past few years, it would appear that opinion of him has dropped significantly since his breakthrough in 40 Year Old Virgin. Those same people may be surprised when watching. Waltz. ‘The scenes between Williams and Rogen are among the best in the film. They still cherish their more childlike instincts yet take on and appreciate many of the adult responsibilities bestowed upon them.’

The other department where Polley succeeds both as a screenwriter and director, which involves challenging the viewer, is in how the story, and more specifically, how the evolution of the Daniel-Margot relationship is not so easily digestible. Romance is in the air, that much may be true, but this is romance which brings consequences along with it. Margot is, after all, married to a man with a purpose in life. The scenes between Williams and Rogen are among the best in the film. They still cherish their more childlike instincts yet take on and appreciate many of the adult responsibilities bestowed upon them. When Daniel makes his presence felt more intensely, a new love triangle complicates her life dramatically. The more time is spent with Daniel, the more her feelings sway away from Lou to her neighbour. The film does not present Daniel as a better man than Lou. In fact, of the two, it is Lou who arguably stares at better odds of making a decent living, provided his cook book gets a proper launch. Daniel, on the other hand, is more of a love struck puppy who hides away in his second story apartment where he paints at night. During the day, he works as a rickshaw boy. Suffice to say, it is not the most awe inspiring life style.Waltz, by sending Margot on a journey ripe with important decision making, therefore asks the audience to wonder what the correct decisions might be. From the start of the picture to the very last frame, Margot has been faced with the prospect of making a major decision in her love life, made that decision, and then has had to live with the consequences of said decision. When is it alright to follow one’s heart and when should the mind have its say? Is there a correct decision at all, even when those revolving around the decision maker criticize them for the path chosen? That just might be the best thing about the entire film: it never feels as though Margot made the right choice, but who are we to say anyways?

If there is a weak link, apart from the fact that the quirk can be somewhat grating at times (a question of very personal taste on the part of the reviewer, mind you), it would have to be Luke Kirby and the presentation of his character. Kirby has never been a terrific actor, relying more on his charming looks than on genuinely solid acting. As previously stated, he resembles more of a love sick puppy without a backup plan than someone ready to engage in a long term relationship and make a real life for himself and a loved one. In some ways, it does undermine to a certain degree the film’s greatest strength discussed in the previous paragraph, about the challenge of big decision making. The idea is still there, and a very pertinent idea it is, only that when compared to Lou, however many reservations towards Seth Rogen some might have, Daniel simply does not feel like an adequate challenge. Lou is funnier, warmer in character, has a plan in life, albeit one in progress, and unconditionally loves Margot. What exactly does Daniel offer to counter act all of that? The film is unsure of the answer. Then again, perhaps that is what makes the dilemma Margot faces all the taller because only she can understand the reasons for possibly taking Daniel over Lou. As for the audience, they are left out in the cold. Moments which evidently serve to show how Margot might be drifting away from Lou feel rather hollow as well, which does not help things either.

Take This Waltz does not send the romantic drama in any bold, new direction. It does some things very well however, to the point where the film is absolutely worth seeing at least once. Its greatest weakness is in the characterization of one of the two male romantic leads, which obviously poses problems, not to mention that the actor in question feels miscast. It may not be a complete performance, but Waltz does manage to strut some of its best stuff.