It’s something of an unwritten rule for any stage performer that you must, at the drop of a hat, be able to think on your feet and react off script to something unexpected, whether it be an unsuitable interruption or a gaffe. Remaining organic in your presentation is the key, being in control of your performance is paramount. This trait extends to actors also, whether the thespians or the movie stars, and improv classes are usually a must, particularly when it comes to some free flow directors.

Although this diligence often goes unseen in a business as taciturn and unsentimental as cinema, when a moment occurs in which a star lives in their part sufficiently to improvise, to throw in an entertaining ad lib, it can be golden. In comedy, it can be hilarious, but in more serious drama it is all the more impressive and, occasionally, iconic.

Here are just ten examples of actors taking the material into their own hands with truly great results. 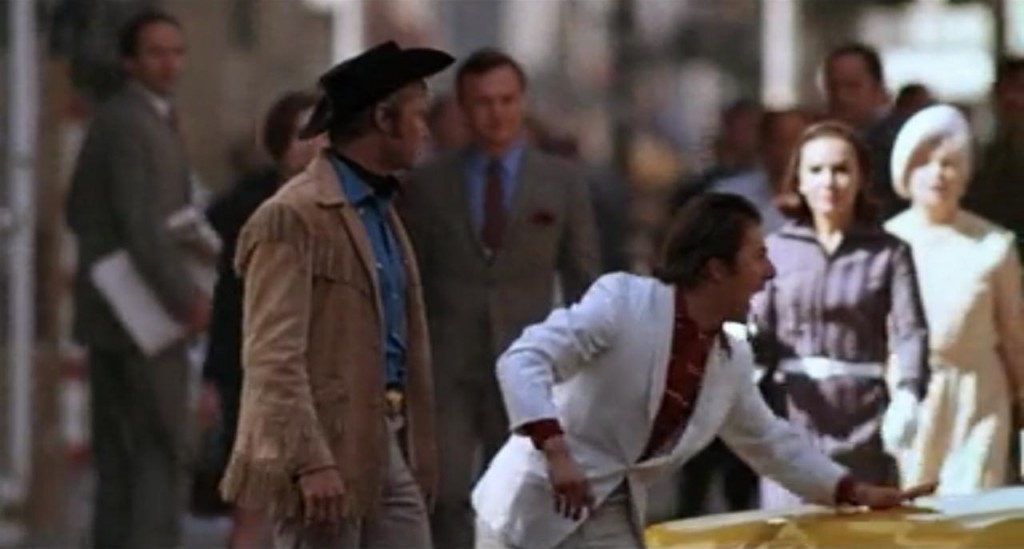 Perhaps the most infamous and hotly debated adlib in film is Dustin Hoffman’s wild rant at a reckless cabbie in 1969 classic Midnight Cowboy. As Hoffman’s Ratso strolls along a busy big apple sidewalk with new acquaintance Joe Buck (Jon Voight), they step onto the street and are almost run down by a yellow cab. Rather than break character, Hoffman launches into a uniquely New York tirade at the driver, exchanging furious insults with the hapless motorist.

Although reports conflict on what really occurred here, with stories verging from the cabbie having slipped through the barriers of the cordoned off, on location set to the taxi being driven by a confused extra, the one constant is that Hoffman’s reaction was entirely unscripted, and perfectly natural. Most impressively, it is entirely in-keeping with Ratso’s character, right down to his musings afterwards that being hit by cars is a good way to get insurance money. 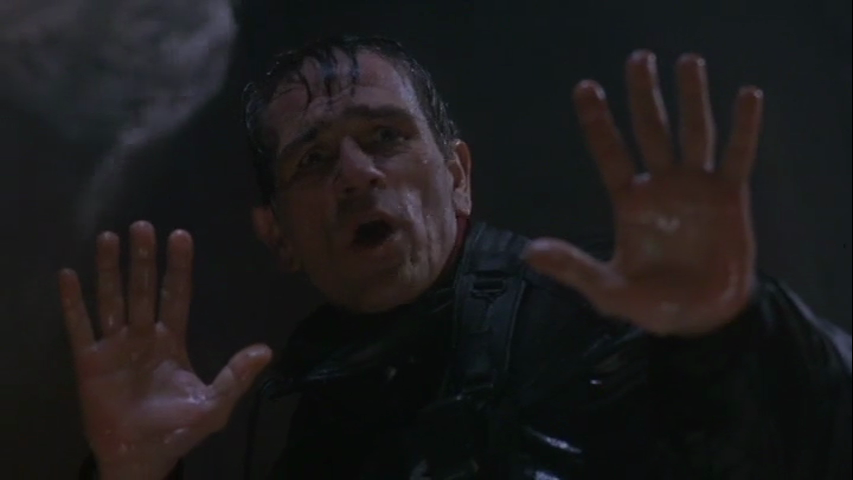 An actor with something of a reputation for going off road in his efforts to improve scripted dialogue, the pique of Tommy Lee Jones’ improvisational excellence comes from his Oscar winning role as Marshall Samuel Gerard in The Fugitive, in which he chases the wrongly convicted Richard Kimble (Harrison Ford).

In a pivotal scene near the halfway mark, this hunt leads the two into a showdown in a sewer network, and Kimble gets the drop on his pursuer, holding him at gunpoint. Rather than kill or exploit him, Kimble takes the chance to somberly insist “I didn’t kill my wife!”
Without a trace of irony or concern, Gerard replies with the iconic “I don’t care!”

By far the film’s most famous line, this return is not only a priceless piece of establishing character, giving us a short and simple insight into Gerard’s attitude, but also a brilliantly judged ad lib from the actor. 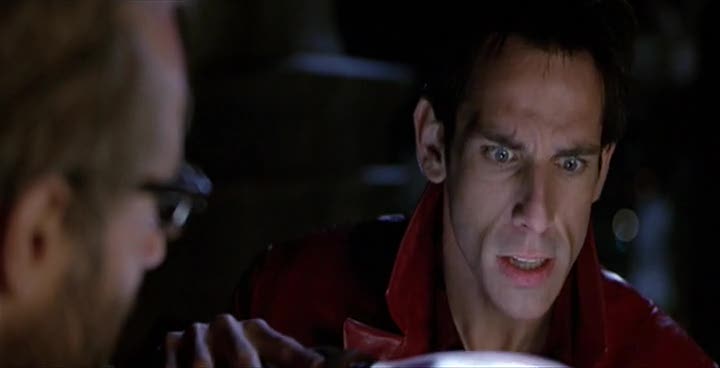 “But Why Male Models?” – Zoolander

Although a break from the topic, improvisation in drama, a priceless exchange from the comedy Zoolander merits a place on this list due to the way it came about. In a pivotal scene, moronic protagonist Derek Zoolander (Ben Stiller) arrives at a clandestine meeting with paranoid conspiracy nut, and former hand model, JP Prewitt (a wonderfully judged David Duchovny cameo).

See also  'Amy' is a portrait of searing vulnerability

At length, the Mulder-esque Prewitt explains that the fashion industry has been behind every notable political assassination of the last hundred years, using models as assassins. This prompts Zoolander to ask why male models, to which a long explanation is given. After the conversation continues, Zoolander repeats the question “Why male models?” A baffled Prewitt indignantly replies “Are you kidding? I just told you like a minute ago”

This exchange is made more hilarious when you realize that Stiller had forgotten his line, and instead used the previous one, resulting in Duchovny’s bemused response. What normally would end up as an outtake instead becomes the scene’s funniest moment. 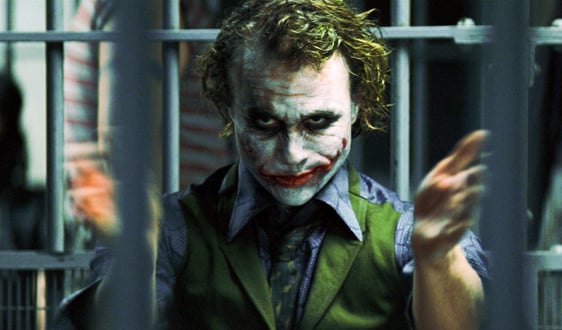 A Round of Applause – The Dark Knight

So much has been said about the late Heath Ledger’s turn as the Joker in Christopher Nolan’s superlative The Dark Knight, and rightly so. A menacing, unpredictable and yet somehow endearing performance, every frame Ledger appears in is a thing to cherish, whether it be magic tricks or bank heists.

But one small moment really goes some way into showing just how invested in the dark and macabre character the Aussie truly was. After the Joker has been arrested by Jim Gordon (Gary Oldman), he is held alone in a cell to silently watch proceedings, as Nestor Carbonell’s Mayor Garcia arrives to take a look at Gotham’s menace. After a brief exchange, Garcia announces that Gordon is GPD’s new commissioner, prompting applause from the gathered cops…

…and completely serious, unscripted clapping from the Joker himself, an ominous and unsettling gesture that injects much darkness into a proud moment. As the scene was played out, Ledger began to applaud, and Nolan had his cameramen keep rolling to capture the display. Fully in-character, and a genius piece of improvisation. 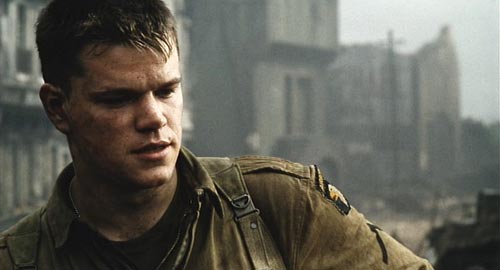 Though playing the titular character, Matt Damon’s role in the 1998 classic Saving Private Ryan was somewhat flat on paper, showing up only in the last act and spending most of it escaping German machine gun fire. But a small, entirely improvised monologue helped give the audience a small amount of insight into Ryan, and provide an understated moment of pathos.

Awaiting the inevitable Wehrmacht assault on their isolated stronghold, Ryan and main character Captain Miller (Tom Hanks) sit in the rubble of a French street, listening to Edith Piaf’s No, Je Ne Regrette Rien. After discussing their home lives, Ryan tells a story about his late brothers, in which the eldest, Dan, is caught making out with a girl in the loft of their barn. Laughing genuinely at the humor of the memory, Ryan finds a happy way to remember his siblings, even if it ends on the somber note that this was their last night together as a family.

From an actor coming off the back of writing an Oscar winning screenplay, the talent in the storytelling is undoubted, but still a highly impressive moment of improvisation that goes some way to building up the character. 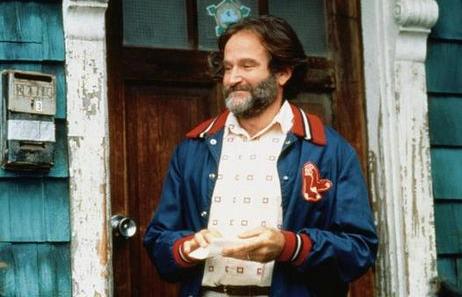 And, on cue, is said Oscar winning screenplay, 1998’s Good Will Hunting. Although much of Robin Williams’ career has consisted of wildly unpredictable, off-base comedy, he found a new niche here as an outstanding serious actor. This, of course, didn’t prevent him from throwing his own moments of magic into proceedings.

Though the material hits closest to home when sticking to the intricately constructed monologues, of which there are many, great touches of charm are brought by Williams’ keen instincts and timing when it comes to bringing the funny. Most notably his character, psychiatrist Sean Maguire, tells a story about his wife’s flatulence, completely improvised by Williams, which has actor Matt Damon and the cameramen in hysterics.

But most key is the film’s perfect final line, upon which Sean discovers a letter from a now happiness seeking Will, which ends with a borrowed quote from Sean; “I gotta see about a girl”

Totally off-script, Sean looks up and, with a smirk, remarks “Son of a bitch. He stole my line” 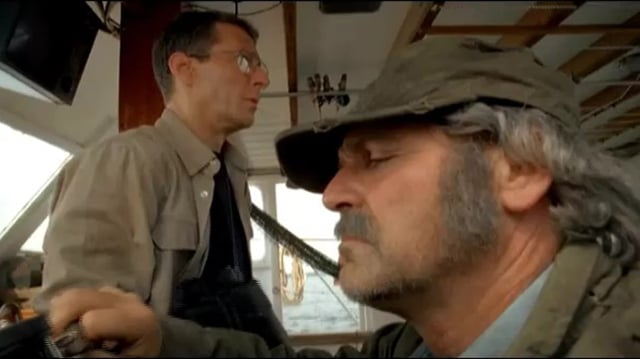 Another iconic, widely quoted (and misquoted) line from a movie considered to be one of the greatest ever, and certainly the finest of its genre, the truth behind Jaws’ perfect in-movie tagline is that it was plucked out of nowhere by its nominal star, the late Roy Scheider.

With Brody, Quint (Robert Shaw) and Hooper (Richard Dreyfuss) on the open sea aboard the Orca, shark hunting boat, the trio have fallen into a casual routine. Almost absent mindedly, Brody is tossing chum into the ocean as a lure to their quarry, the great white shark. After shouting something to Hooper, he turns and finds that, for a brief second, he is throwing the bait straight into the mouth of the previously unseen predator, and understandably balks back in horror.

Silently walking away in a state of shock, Brody finds himself in Quint’s bridge and, in bewildered, highly concerned and unscripted fashion, utters the unforgettable “You’re gonna need a bigger boat”

See also  'The Fugitive' to be remade at Warner Bros. 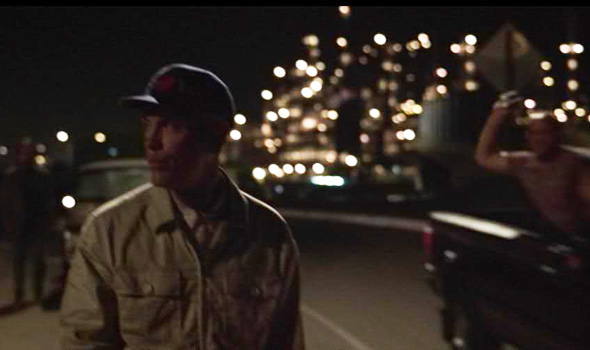 As already discussed, the black and surreal humor in Being John Malkovich is the source for much of its weird charm, whether it be violently misunderstood street art or Willie Garson’s ‘retard’ laden restaurant gratitude monologue. But the biggest laugh of the film, coming out of nowhere and at the most unlikely moment, was actually a retrospectively hilarious on-set prank.

After Malkovich himself takes the Malkovich tour, itself a scene of bizarre genius, the actor is dumped on the road side and meets John Cusack’s Craig, resulting in an existential confrontation. Furious and shaken, Malkovich wanders away. Then a passing motorist hangs out of his window, shouts “Hey, Malkovich! Think fast!” and hits him on the head with a thrown beer can, causing a primal cry of pain and hands to head.

Already priceless, this moment becomes legend when the circumstances behind it are revealed. This moment was unscripted, and was in fact conducted entirely by a drunken extra who thought it was a prank too good to go unfulfilled. Rather than be fired and arrested for his act, the prank was included in the cut and the extra was given a pay rise since he now had a line of dialogue in the film. That it matches the tone of said film too, shows that sometimes chaos creates perfection. 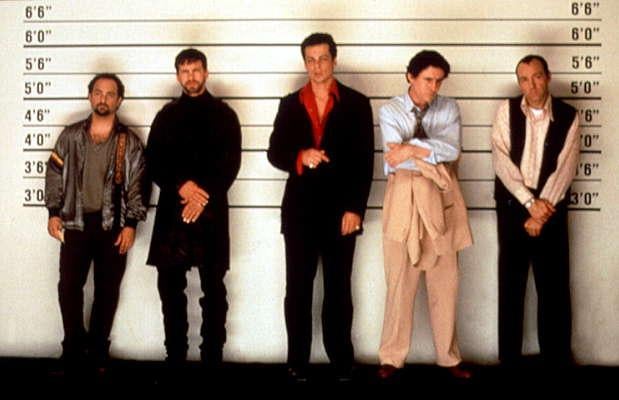 The Line Up – The Usual Suspects

Surely winning an award for the most successfully off-beat scene in any celebrated film ever is the infamous line up in The Usual Suspects. After a deeply serious, mysterious first twenty minutes, the union of the five main characters at a police line up was always intended to be a serious and even superfluous moment, in which each man reads a line to be used as identification.

See also  The Rise and Fall of 3D Movies?

However, when the five actors (Kevin Pollak, Stephen Baldwin, Benicio Del Toro, Gabriel Byrne and Kevin Spacey) continued to corpse throughout the various takes, director Bryan Singer eventually decided to run with it, leading to such wonderful details as screenwriter Christopher McQuarrie’s very much real stage instruction doubling as a police officer’s order, and Del Toro’s angry response making it as that of his character’s.

The reason for their inability to hold back laughs seems to stem either from Byrne farting, or from Baldwin’s…overenthusiastic reading of his line. Whatever the cause, the illogical but genuinely amusing scene is one of the picture’s most memorable. 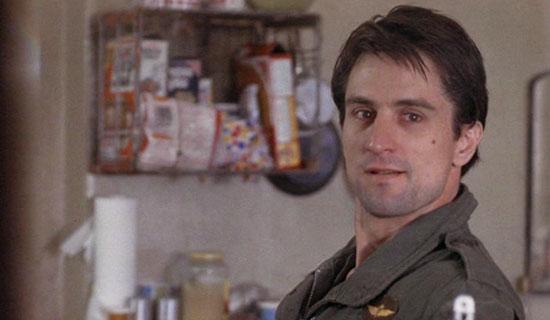 And, finally, an unforgettable moment in a masterpiece of a film that has become part of the zeitgeist for even casual film goers, Travis Bickle Vs the mirror. Much like Dustin Hoffman before him, this adlibbed and loosely coordinated scene has become surely the film’s most famous moment, and displayed the raw, quick thinking talent of another legendary young actor, Robert De Niro.

Now fully in psychotic mode, De Niro’s Bickle plays around with his holstered weapons, practicing for his big debut as a deluded vigilante. Spotting himself in the mirror, he glares and utters “You talkin’ to me…?”
The rest, culminating in crazy eyes and quickly drawn sidearm, is cinema history.

As well as being a notable and unsettling display in its own right, De Niro’s adlibbing strengthened the depicted mental downfall of Bickle, showing just how much he was falling apart at the seams. Understated and rough, not Hollywood monologue, it’s a truly great film moment.

See also  Villains are the Heroes in the Upcoming 'Vertoscope' Anthology