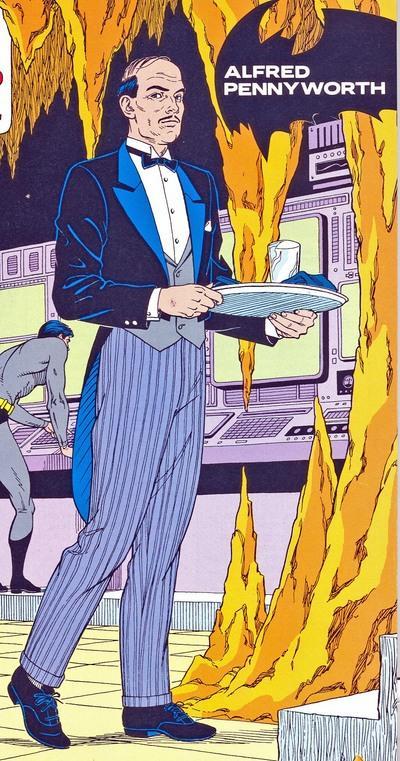 “’Alfred’ – he said not long ago – ‘if anyone ever asks for an obituary, tell them Batman’s big secret was a classic Whodunnit(?)… Only it’s not about who killed Batman, but who kept him alive all these years.’ And he stopped there, leaving the rest to me.” The ending of Batman #683, a monologue by the faithful butler, sums up the character well. No, not Batman… rather the titular character of “What the Butler Saw”: Alfred Pennyworth.

It’s been said that if Lucius Fox is the brains of Bruce Wayne/Batman, Alfred is his heart. He very well could be the most influential supporting character in all of mainstream comics. He has altered storylines, raised heroes, and foiled villains. He is iconic. When we envision The Batman, examining evidence or fixing gadgets in the Batcave, we envision him… offering advice or stitching wounds or providing companionship. Alfred has been there for a long, long time; he will likely remain there for a long, long time (in some form or another).

The Alfred we all know and love did not always exist. He first appeared in a story titled “Here Comes Alfred” in the pages of Batman #16. He was a bumbling, overweight, wannabe detective, who clearly read too much Arthur Conan Doyle in his free time. He didn’t have the brains to serve Sherlock Holmes tea, much less solve mysteries. This was in 1943, just several years into The Dark Knight’s existence. It didn’t last long. Soon the character was retconned, first discovering the Batcave after hearing painful groans in the middle of the night. It was Batman and Robin, both wounded. Alfred keeps his shock in check and treats their injuries, earning their trust and becoming The Dynamic Duo’s confidant, advisor, and so much more.

Ironically, it was the live-action 1940s Batman serial – umm, “show” – that inspired the comics’ transition to the regal, mustached Alfred Pennyworth that is so iconic now. So we can all thank William Austin and the entire team behind that serial for the modern Alfred. (The serial also is responsible for The Batcave itself and its secret passageway behind the grandfather clock. It spawned the often complex relationship between the comics of Batman and his live-action portrayals in various forms. Another conversation for another day, I suppose.)

Alfred’s look has been consistent since the mid-40s, but his history has not. I don’t want to get too wrapped up in continuity here, that sounds awfully tedious. Besides, what makes the character has transcended continuity over the years. Even alternate versions of Pennyworth keep his core traits and principles. There are two elements of his backstory that regularly pop up: retired stage actor and/or ex-British intelligence agent. In some cases, his father Jarvis served the Wayne family originally, and his dying wish was his son come to America to continue the tradition. ‘Jarvis’ would become another famous superhero butler in the pages of Marvel’s Iron Man. History aside, what makes Alfred Pennyworth the premier supporting character in superhero comics is his relationship to Batman and his allies.

Alfred’s most significant role to the mythos of Batman is that of surrogate father to Bruce Wayne. Modern Age incarnations have taken this concept to a literal extreme with Alfred taking legal custody of Bruce as a child following the death of his parents. Even without holding the title of legal guardian though, Alfred’s words and actions are often parental. Choosing to be a parent is sacrificial in nature. Alfred sacrifices much for Bruce: careers, passions, homes, even love. He regularly puts his mind, body, and soul on the line, allowing Bruce to follow his obsessive path. Father figure to Bruce isn’t his only familial relationship either. One could say he acts as surrogate mother (in the traditional sense) to Bruce also, nurturing and caring for him both physically and emotionally. Some have argued that Leslie Thompkins is the surrogate mother to Alfred’s version of father. The two have even been romantically linked by some writers, surrogate parents so to speak. Alfred’s represented a grandfather to each of the Robins over the years, offering words of wisdom to the boys and even taking them out for a spin in the Batmobile. He is family, plain and simple.

Being that Alfred is not blood to Bruce, it makes sense that he is the best friend Bruce will ever have, perhaps by default. In Batman Begins, Batman mutters, “I don’t have the luxury of friends” in reference to Jim Gordon. He doesn’t for the most part. Gordon could never really be his friend, though. Their relationship leans more professional acquaintance than anything else, sometimes even with doses of mistrust. But Alfred does everything for Bruce a best friend would… for their pseudo-Goth buddy who dresses up like a crazy person and masks his feelings with a womanizing public persona. They have shared many laughs over the past 75 plus years of comics (and in other mediums), often from the butler’s dry, English wit. When written well, Alfred can be downright hilarious. Friends also have each other’s backs, which Bruce and Alfred do time and time again. Alfred regularly comes to both Bruce and Batman’s aid, whether he is in physical danger or just needs a ride home. He has even helped Bruce with some of the women in his life. It’s like Adventure Time says: homies help homies.

There is another important facet to the Wayne/Pennyworth relationship. Alfred is friend and family wrapped into one, but the professional side of his relationship with Bruce is just as important. He has stitched up Batman and his allies repeatedly over the years, in that of a professional manner. The best doctors – particularly surgeons – are professional in nature, they have to be. On a purely pragmatic level, this side of the character is huge. A trustworthy, seasoned doctor always around is invaluable to the Batfamily. But Pennyworth is also a business associate/adviser to Wayne, helping with everything from personal finances to even large decisions regarding Wayne Enterprises. And though Lucius Fox – in some versions – provides Wayne with the tech to become The Bat, Alfred is the last impartial voice before Batman and Robin hit the streets. By all rights, he is the curator of the Batman machine. At times critical of the overuse of gadgets, some versions push for a less technological Batman; while other versions crawl under the Batmobile to help modify it. He is the purveyor of the Batcave, acting as a shopkeeper/vendor to his daily black-clad customer. 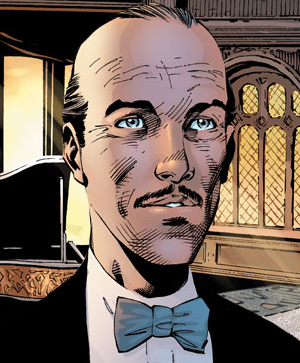 So his relationship with Batman (and the Robins) is multi-layered. How has this affected the stories in Batman, Detective Comics, and even books like Justice League through the decades? For one, Alfred is valuable as a storytelling and plot device. He is one of very few people with knowledge of Batman’s secret identity and has access to all of Batman’s assets at any given time. Combine this with the power of his relationship with Bruce – and the rest of the Batfamily – and he has the ability to affect things in big, dramatic ways or subtle twists. Take the 1999 crossover “No Man’s Land” where Batman is missing from a Gotham City cut-off from the rest of the world by the US Government. In Batman’s absence ,Alfred shows what he can do when it comes to espionage and even hand to hand combat. He ends up playing a huge role in the fight for order in Gotham, a sort of elderly, British Jason Bourne. Alfred has been abducted numerous times by Batman’s rogues, often used – sadly – as bait or ransom. He has saved Batman’s life countless times in various ways, often changing the course of a story dramatically. Even when writers opt to keep Pennyworth at Wayne Manor or the depths of the Batcave, he can influence something like rising action… say, a conflicted Bruce coming to him for advice on which course of action to take next. Alfred has even played influential roles in Justice League arcs and major DC event comics.

Since his William Austin inspired transformation and subsequent changes in backstory, Alfred Pennyworth – as by all counts an ancillary character – has had a deep and profound impact on the Batman mythos and the greater DC Universe. He has played major roles in Batman’s various adaptations, becoming almost as instantly recognizable as the Caped Crusader himself. If you find that a controversial claim, can we not agree that he at least knows Bruce more than anyone else: