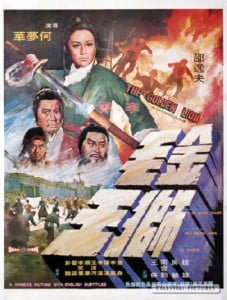 The divide between good and evil can be very thin, almost imperceptible to those who prefer painting the world in grand, all-encompassing strokes. The same goes for film, wherein some stories are told with clearly delineated sides while others adopt more nuance. Experienced director Ho Meng-Hua and screenwriter Patrick Kong Yueng cooperated in 1973 to make The Golden Lion, a movie in which the alignments within firm camps of good guys and bad are not well-defined, providing its story more texture than typical martial arts fare.

Dai Xioyao (Chiu Hung), better known as The Golden Lion, is a dastardly thief, wronging society’s elite and sharing with the poor and destitute. The burglar’s reputation precedes him, inflating his ego to the extent that he possesses the gall to sign his handle on the scene of his crimes. The authorities’ patience has been tested far enough, however, prompting them to hire a vile mercenary, Wang Jian Chao (Wang Hsieh), to track the Lion down and bring him to justice. Dai is caught entirely off guard when, upon returning home, he discovers all members of his family have been slaughtered. The ensuing brawl against Wang and his minions leaves the protagonist poisoned, his life hanging by a thread. His only chance at survival rests in one Doctor Lu (Fang Mian) who resides in the mountains. The doctor and his daughter, Wen Fang (Li Ching), accept to help out the desperate outlaw but must contend with Wang’s unfathomable determination.

Few would argue that The Golden Lion is making headways in the art of storytelling with a bold new approach to drama, but it is more than fair to argue the point that director Ho Meng-Hua takes several ideas that might be familiar to seasoned movie buffs and utilizes each effectively in concocting a satisfyingly layered adventure. The film refreshingly keeps the stakes comparatively low, focusing essentially on the state’s desire to throw Dai the book and the latter’s attempt at earning the confidence of his newfound, unexpected allies, doctor Lu and Wen Fang. From there, the director formulates an intimate tale of how people either overcome prejudice or fall prey to it. 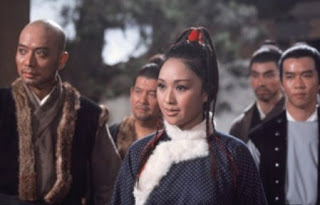 The more obvious angle to this story is the fact that, however much Dai exercises his talents at being an outlaw for the purpose of awarding those in need with a bit of a support system, the authorities have rightful claim to putting a sudden halt to his criminal career. Here is the other portion of the story from which the filmmakers get the most compelling mileage. Setting aside the fact that doctor Lu sees the arrival of the sickly Dai at their doorstep as a golden opportunity to test a medicinal formula he has been diligently preparing for years (a silly, throwaway plot point if there ever was one), the presence of a wildly known thief produces very different reactions out of the family members, chiefly Wen and her brother Min Yip (James Nam Gung-Fan). Both take issue with the fact that their father, a respected, sought-after man of medicine, is coming to the aid of what they see as a lowlife. Heeding Dai’s pleas for assistance will do no more than sully the family’s reputation, an outcome both want to abort at all costs. Meng-Hua smartly creates a rift in the sibling allegiance, Wen eventually coming to understanding not only her father’s principle of helping all those in need, regardless of past actions, but Dai’s personal history. Min, on the other hand, is steadfast in his disdain for doctor Lu’s magnanimity, eventually forming a partnership with the other side, who claim they wish to prevent the doctor from achieving his goal to protect the family’s image, the exact ideal Min hoped to accomplish in the first place.

It should seem pretty evident that very little of this is wholly original, yet Ho Meng-Hua has a way of meshing these ideas together in such a way that it becomes incredibly simple and enjoyable to witness how everything plays out. It helps, of course, that he is a skilled director with a keen knowledge of how to pace his stories, keeping the plot moving along in a brisk manner that avoids any lulls, and also succeeds at landing all the appropriate emotional beats. His visual style is another compelling reason to seek Hua’s films out. Whereas so many other such endeavors have similar if not identical aesthetic identities, Meng-Hua’s are above the fray, much like King Hu and Chang Cheh. The early battle contest between Dai and Wang’s posse features some incredible stunt work, courtesy of some flamboyant wirework, and excellent lighting and set design as the battle takes the opposing sides into the forest on a stormy night. Unlike in modern cinema where, sadly, the presence of a storm is frequently used to camouflage action, Meng-Hua, on a far more limited budget, reaps the potential of said weather effects to enhance the scene. There is a host of various special touches sprinkled throughout that, together, display a veneer of a director’s unique voice. Min Yip choosing to rest in the lap of a gigantic statue atop a mountain instead of performing his wood chopping chores, the brilliant orange gleam of a sunset during a familial clash, and the depiction of sickness through a blurry first-person point-of-view are but three such examples.

Chiu Hung is put in a curious position wherein his character is all everyone can talk about yet is not necessarily the one earning the most amount of screen time. Because Dai is suffering the growing pains of the poison injected into his shoulder in the opening sequence, his ability to partake in the adventurous journey to locate the missing ingredients is handicapped. Even so, he is great when on screen and in full battle mode. He brings a quiet and confident ruthlessness to his scenes that help in building up the special, awe-inspiring qualities upon which the character has built his reputation.

One’s satisfaction with The Golden Lion will vary depending on how much one is willing to award the filmmakers the benefit of the doubt for forsaking originality of plot. In return, however, viewers get a handsomely produced adventure in which the focus is story and character, with the action serving a more peripheral role than is usually the case. Truth be told, the story is dealt with so effectively and the film’s visual palette is so alluring, one can easily forget that the plot is treading old ground. As goes the old saying, sometimes the journey matters more than the destination.