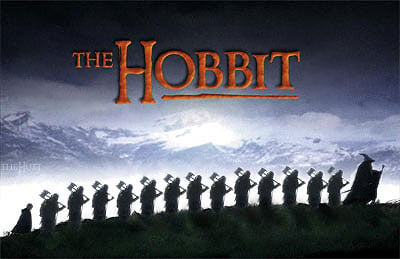 Very recently, Peter Jackson just released his casting for ‘The Hobbit,’ the film that has wavered in and out of production Hell. Currently, Martin Freeman, Richard Armitage, Rob Kazinsky, Aidan Turner, Graham McTavish, John Callen, Stephen Hunter, Mark Hadlow and Peter Hambleton will all be galavanting through Middle Earth on one of the greatest adventures in literature of all time.

• Aidan Turner (Being Human) and Rob Kazinsky (EastEnders) as Kili and Fili, nephews of Thorin.

• Graham McTavish (Secretariat) as Dwalin, blue-bearded, first to arrive at the home of Bilbo Baggins.

• Stephen Hunter (All Saints) as Bombur, the fat, sleepy and slow member of Thorin’s company.

• Mark Hadlow (King Kong) as Dori, strongest of the Dwarves, who carries Bilbo on his back at one point.

• Peter Hambleton (The Strip) as Gloin, brother of Oin, initially suspicious of Bilbo’s worth, but eventually convinced. Father of Gimli from The Lord of the Rings.

Assuming, that if all things go to plan, Ian McKlellan will reprising his role as Gandalf and Andy Serkis as Gollum.

So let’s see if ‘The Hobbit’ will actually happen with this huge casting announcement as filming locations are still in the process with only four months before shooting begins.

Peter Jackson has also spoken out about the casting (/FILM)

“Despite the various rumours and speculation surround this role, there has only ever been one Bilbo Baggins for us… There are a few times in your career when you come across an actor who you know was born to play a role, but that was the case as soon as I met Martin. He is intelligent, funny, surprising and brave — exactly like Bilbo and I feel incredibly proud to be able to announce that he is our Hobbit.”

“Richard [Armitage] is one of the most exciting and dynamic actors working on screen today and we know he is going to make an amazing Thorin Oakenshield. We cannot wait to start this adventure with him and feel very lucky that one of the most beloved characters in Middle Earth is in such good hands.”

“Rob [Kazinsky] is an extremely talented young actor with a huge career in front of him. I’m thrilled that he has agreed to take on the role of Fili. Besides his talent as an actor, Rob is also a champion sword fighter and I’m looking forward to seeing the damage he can do to a horde of marauding Goblins … Aidan [Turner] is a wonderfully gifted young actor who hails from Ireland. I’m sure he will bring enormous heart and humor to the role of Kili.”

“Graham [McTavish] is a terrific actor, with a great depth of experience, which I know he will bring to the role of Dwalin. I have worked with Mark Hadlow on many projects, he is a fantastic actor…I am also proud to annouce the casting of New Zealand actors as Peter Hambleton, John Callen and Stephen Hunter. Fran and I know that they will bring great depth and talent to our Company of Dwarves.”