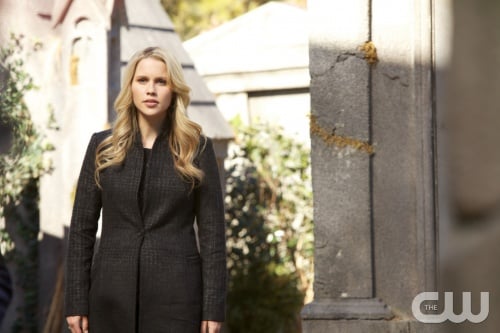 The Originals, Season 1, Episode 16, “Farewell to Storyville”
Written by Michael Narducci
Directed by Jesse Warn
Airs Tuesdays at 8pm EST on The CW

On this week’s The Originals, Klaus, Rebekah, and Elijah come to blows while stuck in a bewitched cemetery, Cami and Marcel attempt to help resurrected Davina’s fragile mental state, and Rebekah leaves the city.

Since the show’s first episode, the original family has been using the phrase “always and forever” to represent their undying devotion to one another, despite plenty of betrayals and abuse (mostly at the hands of Klaus). And the phrase, though admirable, has always felt a bit off in relation to the remaining original vampire siblings. Well, toward the end of “Farewell to Storyville,” Rebekah twists the phrase and turns it into something much sadder, but also much more honest, when she delivers a heartbreaking little monologue to her enraged older brother.

She says, “We are the strongest creatures in the world, and yet we are damaged beyond repair. We live without hope, but we will never die. We are the definition of cursed. Always and forever.”

So far, this is the best definition of the original family’s existence–they’re older and stronger than any living creature, and they’ll continue to outlive everything around them, yet they are irrevocably broken people who are more or less alone. It’s depressing, but very true, and Claire Holt does a brilliant job voicing this realization. Actually, Claire Holt slays this entire episode with her performance, which ranges from angry to resigned to guilty to heartbroken and finally ends with relief and eager happiness. It’s truly beautiful to watch.

“Farewell to Storyville” is, at least for the foreseeable future, Claire Holt’s final episode (making her great performance all the more sad, because the audience won’t be seeing it again). Her send-off is put together with flashbacks of the original siblings as children interspersed with her modern-day feud with Klaus–a combination that is fittingly devastating and bittersweet. Rebekah’s always been a flawed but lovable character, and she will definitely be missed.

With so many recent deaths and departures, New Orleans is becoming a heavily testosterone-fueled city once again, so the loss of yet another heroine is a bummer. But ultimately what Holt’s departure on the show means is a loss of the dynamic between her and her brothers. With Rebekah gone, there’ll be no one around to balance Klaus’s irrationalities with emotional reasoning (save Elijah, who, if episode’s end is any indicator, might be more like Klaus than he likes to believe).

Meanwhile, Klaus is down to one-and-a-half (if you count his unborn child) family members. He’s still the petulant child he’s been since the beginning of the show–a shame, since he seemed to be developing better as a character for a while. Insight into why he is the way he is doesn’t cut it anymore. Thus far, we know his father abused and hated him for years, and then hunted he and his siblings for centuries, but Klaus has had 1,000 years to evolve. Even his siblings have managed to retain semblances of their humanity, so where is Klaus’s? Does it matter that he chose not to kill his sister, despite promising for several episodes that he would? Klaus remains a monster, no matter how desperately the show tries to sway us to his side or make the audience sympathize with his life. Maybe the loss of his sister will be a push he needs. We can only hope.

Despite the loss of Rebekah, “Farewell to Storyville” is one of the show’s best episodes yet. The performances are incredible, and the storyline is tight–several future plotlines are introduced as yet another series regular disappears, leaving the show’s future a bit uncertain, yet still promising.