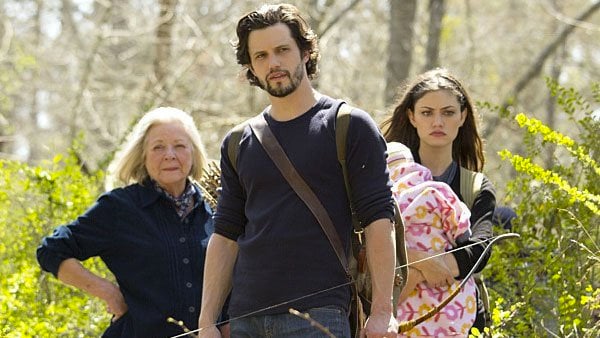 The Originals, Season 2, Episode 21, “Fire With Fire”
Written by Michael Narducci
Directed by David Straiton
Airs Mondays at 8pm (ET) on The CW

On this week’s The Originals, Klaus wreaks havoc on his family and friends, Dahlia brings a thunderstorm to NOLA, Hayley and Jackson try to flee, Elijah and Rebekah use Freya to trap Dahlia, and Vincent helps Davina become regent of the city’s witch coven.

“Fire with Fire” is an immense improvement over last week’s lackluster episode, mainly because Klaus’s apparent regression/lack of character development is proven to be a ruse. While Klaus remains a frustratingly fickle and emotional character, “Fire with Fire” is proof not only that Klaus is capable of character growth, but also that the show’s writers have the intention of developing him further. Still, it’ll take a while before he stops being one of the weakest character links on The Originals, but this is an excellent start.

First time The Originals director David Straiton thoroughly impresses during the episode with some stunningly beautiful shots, especially when Klaus is terrorizing New Orleans–the biggest stand-out is when Marcel hangs upside down in his loft with Klaus lingering behind him. Straiton chooses to aim the camera up at the pair from beneath them, and the moment is both creepy and surprising. Elijah, Rebekah, and Freya’s attempt to ensnare Dahlia is also well-shot, as Rebekah looks powerful and regal as she performs her spell, and Elijah lurks in the shadows. The whole scene is nicely-paced, and the various shots of the trio moving into place–along with Dahlia slowly entering the building–add an extra layer of tension. If this episode is any indication, Straiton is a keeper, for sure.

Meanwhile, Davina and Vincent’s team-up is surprisingly fun to watch. After spending so much of her life being manipulated and used by vampires and witches, it’s about time Davina stands up for herself, and she’s really been coming into her own these past few episodes. It’s a treat to watch her confidently convince the coven to allow her to lead them, especially because she is best equipped to fight vampires, but also because Vincent’s obvious pride as Davina delivers her speech and ascends the “throne” is incredibly sweet and compelling. Plus, it’s nice that The Originals is keeping Yusuf Gatewood around, as he is undoubtedly one of the show’s best actors thus far. Vincent could’ve easily been a very one-note character, but Gatewood breathes a lot of complexity and emotion into his portrayal of Vincent, and it’s downright delightful.

Unfortunately, Marcel’s underling and Elijah’s part-time lover, Gia, doesn’t get to stick around. This is mainly disappointing because it feels like there was so much more to learn about her, and she had so much potential to be a powerful character. Also disappointing is how The Originals took a very self-possessed and headstrong character and used her as a punishment via Klaus to Elijah–Gia may not have gotten much screen time, but she definitely deserved a better exit than the one she received.

Klaus doesn’t stop with Gia–he has to punish Hayley, too, for daring to take Hope away from him. When she pleads with him–ruse or no–to stop what he’s doing because she’s so afraid of losing her daughter, it’s heartbreaking. Though Hayley has only ever acted with her daughter’s best intentions in mind, Klaus often chooses the selfish and bloodthirsty route toward protecting his daughter, and it’s a shame that Hayley and her pack are punished for keeping Hope safe just so Klaus can enact his own unclear plan. Hayley and Jackson do get a sweet moment in a junkyard though, and Hayley’s goodbye to her wolf pack proves how much loyalty and respect they have for her. Klaus is surrounded by excellent examples of leadership done right–it’s unfortunate that he’s too egotistical to learn from those around him.

“Fire with Fire” is an exciting and shocking penultimate episode, as well as a promise that next week’s finale will undoubtedly be crazy and intense.