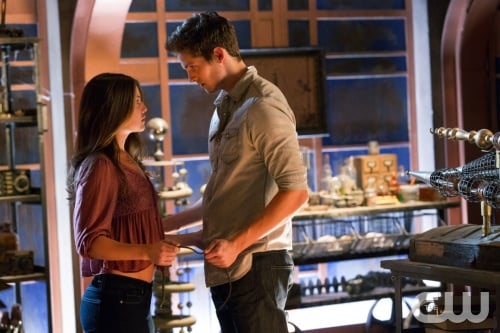 On this week’s The Originals, Klaus spends time with his biological father, Davina and Kol experiment with magic, Hayley teams with Marcel and Cami to capture Finn, and Elijah remains incapacitated.

While “Chasing the Devil’s Tail” is by no means a bad episode, it’s not a particularly stunning one, either. Rather than significantly advance the plot, the episode mainly sets up future, and probably more eventful, episodes. Character relationships are deepened or fundamentally shifted, and several key players are moved into new, more dangerous locations.

Probably the most disappointing aspect of the season so far is the storyline involving Klaus’s biological father. While Klaus is clearly psychologically scarred by daddy issues, his father’s two-episode stint does nothing to influence or help Klaus’s issues. If anything, his presence merely reconfirms Klaus’s daddy issues, a fact that’s been present as far back as Klaus’s run on The Vampire Diaries. The biggest fault here is how irrelevant and unimportant Klaus’s father seems to have been–what, exactly, was the point in bringing him onto the show at all? It’s a question that may or may not be answered in upcoming episodes, but even if it isn’t addressed, the overall storyline won’t suffer.

One of the better parts of the episode is the brief dive into Elijah’s psyche, a place left relatively unexplored thus far. Elijah is easily the most reserved, noble, and thoughtful of his siblings (including Finn), and it’s a rarity to see him struggling internally, especially with his own moral uncertainty. His dreams/visions are really well done visually, and they help reinforce the dilemma Elijah faces while unconscious–something that otherwise would remain a mystery. His psychological war will probably be far more engaging than Klaus’s, and it seems The Originals is finally ready to give insight into Elijah’s mind.

Also, “Chasing the Devil’s Tail” does an excellent job keeping various romantic relationship developments subtle and realistic. The Originals is generally pretty good at keeping romantic relationships a backdrop to the more pressing storylines, a detail that helps elevate the show to a very mature and insightful level. Subtle hand grazes are far preferable to overt displays or declarations of affection, and they are much more emotionally engaging.

“Chasing the Devil’s Tail” isn’t season two’s most exciting hour, but sometimes quieter, character-driven episodes are a necessity. Luckily, The Originals cast is dominated by brilliant actors and characters who are capable of keeping slower episodes interesting.