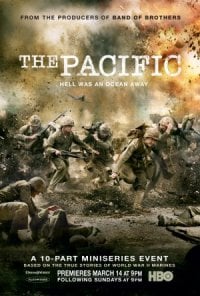 So it has been ten weeks and the HBO mini-series The Pacific has drawn to a close. So I thought I would share some of my thoughts on the production now that I have had the opportunity to watch it in its entirety.

In broad strokes, I have to admit that the series is a brilliant depiction of modern war. In so much that we, as a collective viewing audience might not have seen anything like it depicted on film or television…ever. The good folks at DreamWorks and Playtone have really done an exceptional job at presenting the grim realities of men at war on a massive scale (one-hundred and fifty million to be exact). But how does it hold up to other historical mini-series?

Of course if one is only judging something by the sum of its parts, then the parts of The Pacific stands up on all fronts! The acting is actually quite excellent, the script is great, the visuals are top notch, and the special effects are some of the best we’ve seen on TV (computer generated falling dirt never looked so good)! There was no time (not one nano-second) in the entire ten hours where I didn’t believe that I was watching US Marines fight their way across the South Pacific. And I cared! I really cared about what happened to those boys, Joe Mazello as E.B. Sledge was particularly endearing. So, it can be said that in one sense The Pacific is a completely successful mini-series. But for some strange reason I just couldn’t shake the feeling that it was missing something!

War films are nothing new. In the 50’s and 60’s they were about World War 2 and they were heroic. In the 70’s and 80’s they were about Vietnam and they were disturbing. Then in the 90’s Steven Spielberg threw his hat into the ring and suddenly war films depicted something different. Now, if you say that films like Platoon and Full Metal Jacket are superior to Saving Private Ryan you’d be right. But Saving Private Ryan did something those other two did not do (at least to the same degree). In Saving Private Ryan you got to see…war! Real war, not movie war, not Oliver Stone or Stanley Kubrick war, but as close to real live, screaming, bloody war as we seen on any screen so far! Not only did you see what a machine gun could do to the human body you got to see what a German Flak 38 (a machine gun designed to shoot planes out of the sky) could do to a human body!

Here’s a short history lesson for you: The Germans used Flak 38’s on Allied infantry all the time!

So in usual male fashion after Steve and Tom saw the success of SPR they recruited Graham Yost, Steven Ambrose and Bruce McKenna to help figure out to make another one, only bigger, better and longer…Band of Brothers was born! Same feel, same bleach by-pass look, only more money and ten hours long! And it was great! In Band of Brother’s we got to watch the Second World War unfold in front of us like a good book. From US soil to England to the beaches of Normandy and finally Berlin we got to take Europe from the clutches of Nazi Germany with Easy Company. There was something almost poetic or lyrical about the production. You weren’t following a man; you were part of the company…

We few…we happy few, we Band of Brothers because he who sheds his blood with me today shall be my Brother!
– Henry V

We were with them, we were made to feel as though we were part of that happy few.

In The Pacific the story jumped between three separate points of view (That of EB Sledge, Robert Leckie (who kinda disappears half way through, and Medal of Honor winner John Basilone) so you didn’t have the same sense of community that you did in BoB. You get to know the guys but not as well as you might have if you had a little more time with each. As I said, the character’s and their stories were great, but unfortunately what Band of Brother’s did so well was left on the beach in The Pacific.

Another thing that The Pacific did well but also might have been it’s undoing was the graphic nature in which the war was depicted. In a movie you can hit someone over the head with violence and depravity because it’s over in two hours. You see the horrible thing, the movie ends; you go home, crack a beer, put your feet up and watch Two And A Half Men. The war in the Pacific was a meat grinder. The Marines that fought there did things and saw things that no man or woman should ever have to endure. I’m not suggesting that those who fought in Europe had it any easier than those who fought in the Pacific, it’s just…different! When your enemy will not surrender…ever, you have to go some place deep within yourself to find the strength to be victorious. And I don’t think you can go there and come back the same person. In the mini-series The Pacific, they never shied away from showing you some of those gruesome details. Which in one sense I think is very brave. But being truthful and telling a good story aren’t always the same thing. There’s a rhythm and a pace that has to be adhered to, and if it isn’t, the story can leave the audience with a bad taste in its mouth.

A friend of mine’s father, who endured the horrors of Auschwitz during the Second World War, asked his daughter (my friend) if she would take him to see Schindler’s List. She was concerned that the film might bring up horrible memories for her dad. But he assured her that he would be fine. After the film ended. He said with a grin “It was good movie” “much lighter than I’d expected”. My friend was a little shocked, as she had felt the film was very sad and disturbing. The he said “I guess I shouldn’t be surprised, if they showed how it really was, no-one would go and see it! It would be too horrible”!

I do have to tip my hat at the series as a whole because they did stay true to the story of Marines fighting in the Pacific Theatre during the Second World War. They took you to the islands, your meet the soldiers, you saw them fight in graphic detail and then you were given an epilogue of events after the war had finished. Part 10 is particularly well handled allowing us to see the often-ignored echoes of war. The nightmares, the awkward comments by those who weren’t there, and the difficulty in re-acclimatizing to life as a civilian.

Early in the series, EB Sledges father says of the soldiers returning from WWI:

“Is not the limbs ripped from their bodies that was so terrible but seeing their souls ripped out”!

So perhaps The Pacific wasn’t missing anything at all. Maybe for the first time, it was all there! It told a story that wasn’t pleasant, that didn’t end happily or heroically. That for these few, these happy few, the war did not end in 1945 but continued to be fought by these men for the rest of their lives as they attempted to find a meaning for themselves beyond those dreadful days during the war. And maybe that’s the point that I was missing. War is never poetic or lyrical! It’s not heroic nor is it Shakespearean. It’s war! It just takes things away and leaves a shell behind. And maybe if we take a good hard look at the grim realities of conflict we might not be as quick to jump to that horrible measure.
All in all, an incredible and truthful story, just not a pleasant one!
– Jacob Barker