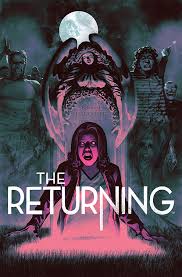 The Returning chases the white whale of horror/sci-fi: a fresh re-imagining of the undead. ‘Changers’ have been popping up, the relatively recent dead returning to life. While not noticeably different on the outside, something has changed in these erst-while dead folks, besides not being dead any more. Some of them have been committing heinous acts of violence, totally out of character from their living selves. No one knows why the Changers are coming back, but their actions have infected the populace with fear and mistrust. That’s the familiar state of the world in The Returning #1.

The story begins with Beth Turner returning from the dead in a hospital bed, violently reacting to her second chance at life while staff argues wether or not she’d be better off dead, given the homicidal tendencies of Changers. A flashback catches readers up on Beth’s story: Beth’s grabby prom date crashed their car and died, and now people blame her, so much so that they protest her leaving the hospital. Beth’s only recollection after death is being gnawed on by unexplained demonic creatures.  A Changer murdered Beth’s mother before the issue begins, so naturally her surviving family is also leery. Beth’s ostracized at school, except by Changer groupies. Things get a lot worse.

Story wise, Returning moves a long at a brisk pace, throwing readers into the world on the first page, and ending with a violent cliff hanger. What really doesn’t make this book work is the over-explored but under-developed lead character. A lot of heady, tragic stuff happens to Beth, but none of it really defines her or makes her relatable. Contrasting the horror on the page, the narration seems cool and removed. Beth’s transformed into one of the things that killed her mother but her reaction doesn’t help define the character.

Mutti and Popov’s art gives the book the muted tones of an 80’s horror movie, which is the best part of this book. The colors loom over every panel, characters have a classic horror feel, and heavy string music practically plays over the panels. The cover feels like it could be on the shelf at an old video store, right after Return of the Living Dead. The Returning’s art evokes that era of movies to great effect.

Where the best of those movies balanced gore with suspense and camp, The Returning’s heavy narration muddles its tone. Changers’ public acts of violence immediately resonate in the shadow of public shootings, and maybe The Returning has something to say about violence in America, the way They Live commented on greed in capitalism. It’s hard to tell from this first issue. The Returning definitely has the whale in its sights, but it hasn’t landed a harpoon yet.