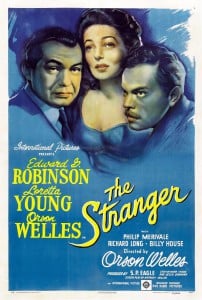 After all the dust had settled and leaked blood had dried following the nightmare that was World War II, the Allied states co-organized a special commission for the purpose of investigating the details thought out by the sick minds of the Nazi regime who perpetrated the ghastly horrors in Europe. Tribunals were established shortly thereafter to convict the culprits, two English-language films having been the subject of said tribunals: the aptly titled Judgment at Nuremberg (the city where the prosecutions occurred) and its more recent remake, Nuremberg, which aired on television as a miniseries in 2000. History has also taught that several of the more slippery Nazi members attempted escape from their formerly secured bastion of terror and lay low elsewhere around the globe. Just because the war and their plans of exterminating a race had come to a resounding failure of a conclusion did not mean they had altered their philosophies, still harbouring unspeakable thoughts of the most violent form of racism imaginable.

What better subject for the iconic multi-hyphenate Orson Welles to tackle for his next film following the box office debacles that were Citizen Kane and The Magnificent Ambersons. True enough, both films are revered by many today yet were considered utter failures upon release. The Stranger, released in 1946, was an opportunity for Welles, a visionary, single-minded, and strongly opinionated individual, to demonstrate that he could make a film within the allotted time span, without spending more than the provided budget and that could earn a profit. Welles moved from starring as a man (Kane) who was believed by others and by himself to be as grand, smart, and cunning as the best of them to a story of a man (Franz Kindler) clinging to the ideals of the Nazi ethos he sees as grand whilst hiding in a sleepy Northeastern American town in the immediate aftermath of World War II. He poses as a college professor on the verge of wedding his beautiful lover Mary Longstreet (Loretta Young), but things take a decidedly shaky turn when United Nations Commission investigator Mr. Wilson (Edward G. Robinson) arrives in town, tasked with bringing Kindler, known to everything as Charles Rankin, to swift justice. 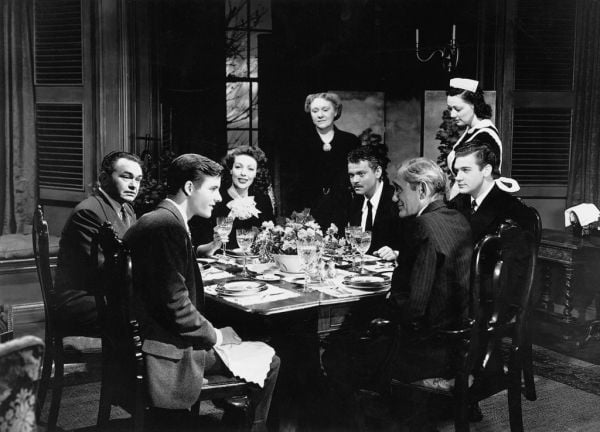 Certainly when compared to a picture with as lofty a set of aspirations as Citizen Kane, considered to be one of the greatest films ever made, The Stranger is low-key. It does not possess the air of artistic genius from a script or cinematography standpoint that permeates Kane’s every majestic frame. Nevertheless, Welles, even when working with a more streamlined story, proves his worth as one of the most gifted directors of his time. His skills as a filmmaker extend beyond making his films look handsome (although that plays a major role) and influences the specific, perfectly tuned performances he gets out of his cast members as well as exploiting the relish he gets out of depicting the flaws in humanity, on an individual or collective level.

In many respects, The Stranger may be taken merely as an arresting little potboiler that dials up solid suspense as to whether Kindler will succeed or fail in his increasingly desperate attempts at avoiding discovery at the hands of those who only know him as an affable academic of German history. There is nothing wrong with that, provided the curious viewer desires nothing more than a thoroughly entertaining thriller of sorts without too much to think about. True to Welles’ ability to weave a compelling yarn, the film works effortlessly on that level. 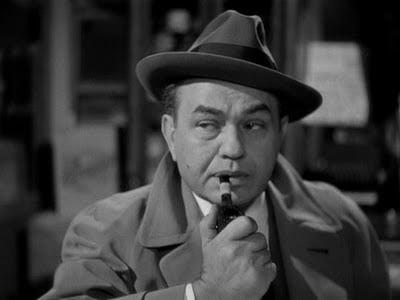 Even though viewers can undoubtedly predict whether or not Robinson will emerge victorious in his game of cat and mouse against the slippery Mr. Rankin, there is a certain amount of pleasure to be had in witnessing these two actors, and by extension their characters, go at it. Welles is often referred to as one of the great directors with his acting ability rarely mentioned in the same sentence, almost as if it was an afterthought. The fact is that he was a very dependable character actor. One need only watch Touch of Evil, in which he plays the imposing police detective Hank Quinlan for such an example. In The Stranger, he plays someone with less influential power who is therefore more prone to the symptoms of stress. Once Kindler understands the true purpose of Mr. Wilson’s visit to his homely community, the pressure is visible on his increasingly sweaty face. Paranoia, intense planning, and fear are difficult to cover up with smiles and charm in front of loved ones when one’s future is at risk. In one of the film’s most riveting scenes, Mr. Wilson, masquerading as a antique clock salesman (knowledgeable of the fact that one of Kindler’s favourite pastimes is the restoration of clocks), is invited to a dinner at the Rankin house, where a conversation turns to the nature of evil that afflicted Germany in the past decade. Wilson presses Rankin for his thoughts on the matter, to which the latter responds with a steady, focused monologue about the steadfast, resolute, militarist nature of the German, which he claims must be destroyed, although the viewer knows full well who Rankin wants destroyed.

There are, however, a plethora of interesting elements to the story’s structure that will push all the right buttons for a film buff who prefers viewing movies on deeper levels. The cinematography and editing in a Welles film is almost always lauded. The Stranger, despite being a more subdued and mainstream project, features some terrific examples of glorious camera movement, angles, and lighting that speak to his mastery of the craft of filmmaking. One tracking shot that sees Robinson follow a recently released war criminal (who he suspects will lead him to Kindler) across a few streets is like a precursor to the famous opening scene from Touch of Evil. Beautifully stylistic silhouettes outlined against the backdrop of sharp lighting are frequent in the film, as are overhead shots from extremely high angles. All in all, The Stranger is a handsomely constructed piece of cinema. 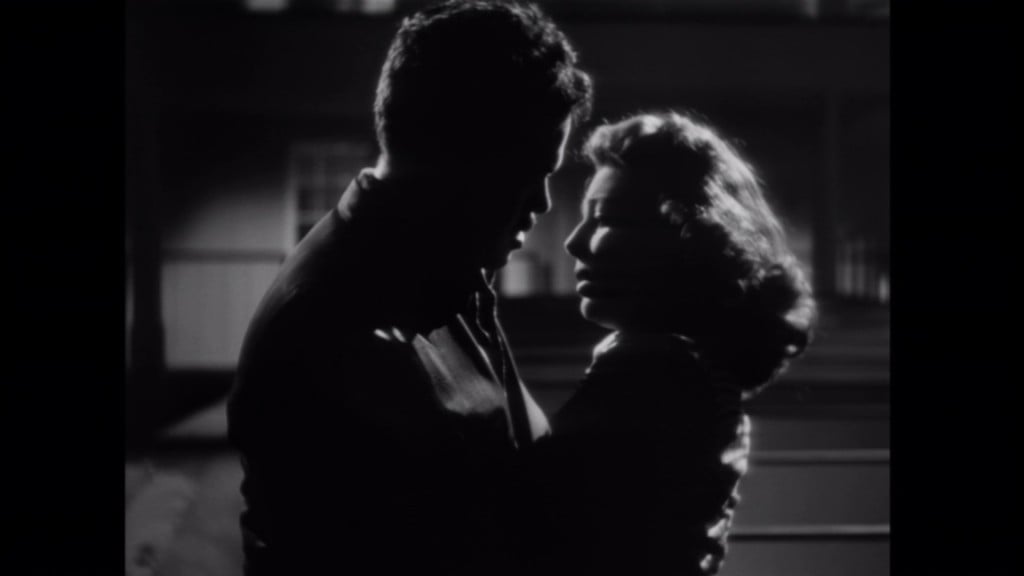 From a script perspective, Welles’ project has plenty in store to satisfy those hungry of a movie with some bite. The idea that people can never truly know who their friends, lovers, or new acquaintances are is a running theme affecting all the main players. Mary, played wonderfully by the always dependable Loretta Young, is stunned when her new husband admits to having dispatched the family dog to cover up for the murder of Konrad Meinike (Konstantin Sayne), yet another man whose sudden appearance could spoil Kindler’s role-playing. He does not tell her the entire truth as why he was compelled to kill the “little man,” yet Mary’s decision to stick by her husband, even convincing herself to lie to Mr. Wilson, is telling. She expresses barely any doubt as to what she should do next. For her, lying to the authorities to protect Charles is of the utmost importance. Only when Mr. Wilson reveals her hubby’s true nature does Mary change face. As previously alluded to, Mr. Wilson play-acts for the better part of the story, presenting himself as an antique clock expert to navigate his way toward his target. Everyone is telling a lie in some shape or form. Some are small lies to do well, others are bigger lies that carry pressing and complex consequences. The mere fact that both the protagonist and antagonist are functioning undercover creates an unusually tense dynamic between each other and all those they interact with.

Many describe The Stranger as minor Welles. There are some easily identifiable reasons for that, especially when juxtaposed against the more lofty, historically significant films of his oeuvre. And yet, categorizing The Stranger as minor Welles is akin to stating I Confess as minor Hitchcock or Shutter Island as minor Scorsese. It is an incredibly well-photographed and acted thriller delving into the horrific memories of Hitler’s master plan of extermination. 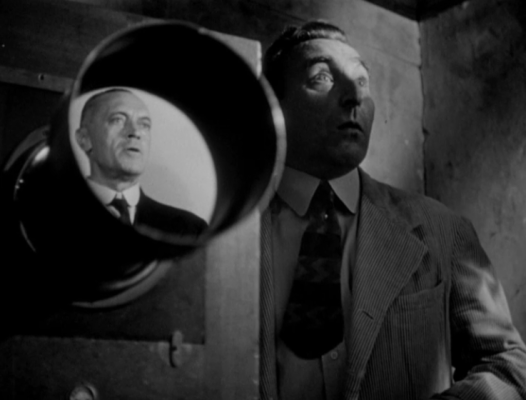 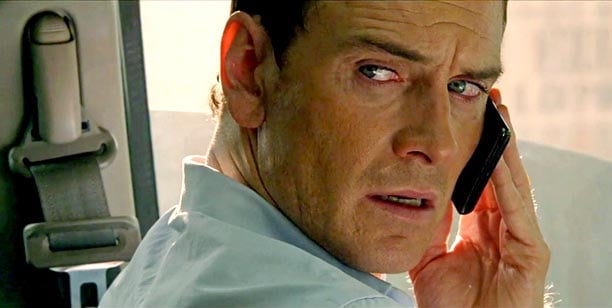 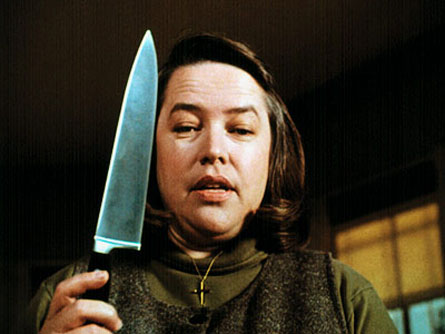