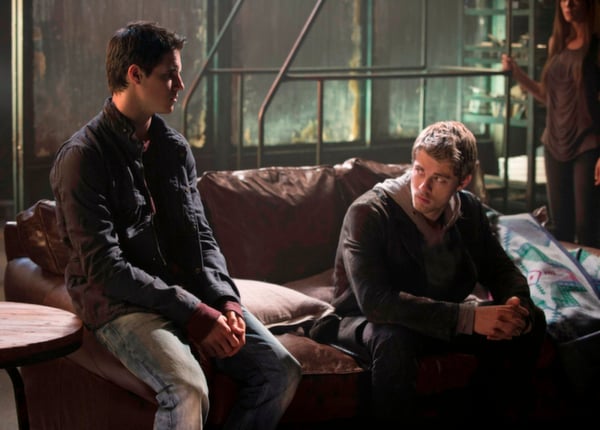 The Tomorrow People Season 1, Episode 4, “Kill or Be Killed”
Written by Nicholas Wootton and Alex Katsnelson
Directed by Guy Bee
Airs Wednesdays at 9pm EST on the CW

The Tomorrow People has been off to a rocky start, retreading tired genre tropes rather than developing its characters. This week, the show tries to change that by focusing in on John’s back story and in some ways, it works. Unfortunately, the episode wastes its time on exposition, splitting its focus between too many characters and wasting genre-favorite guest star Jason Dohring in the process.

Much of “Kill or Be Killed” is spent telling, rather than showing. We’re told John and Killian were close. We’re told they came up together and fought side-by-side. We’re told Killian is dangerous, that he went off the deep end when subjected to extreme drug therapy and started bombing random targets, looking for some twisted kind of revenge. Setting aside that this doesn’t make any sense (yet is presented as if it does), nothing supporting any of these statements are actually shown. In an episode with flashbacks, it’s incredibly odd to have not a one feature the two characters together, either as children or young adults. Instead we get a glimpse of John’s unpleasant childhood in an abusive foster home; this tells us a lot about the character, but the episode seems far less interested during its present-day scenes with this element of the character’s history than his later, unseen friendship with Dohring’s Killian.

Killian gets the Harry Lime treatment, mentioned constantly throughout the first half of the episode only to appear briefly in the later half before sharing a climactic action setpiece with our lead (for half this episode, at least). Had the episode centered fully on John or even Killian, this could have been effective. Instead, we spend long stretches with Stephen, exploring his dynamic with Jedikiah, his mother, and his attempts to manage the complicated new life he’s taken on. If these two conflicting focal points weren’t enough, the revelation that Tomorrow People can be stripped of their inability to kill is all but tossed away. Jedikiah drops this bombshell on Stephen almost nonchalantly, moving quickly to the pressing danger, Killian. Cara and the Tomorrow People are also aware of this process- wouldn’t that be one of the first things to come up when discussing their powers and limitations? Since no one thought to mention this to Stephen before, shouldn’t he be a ball of questions when he finds out? What else have they not told him?

With the narrative split between Stephen and John, neither story particularly works. What does come through clearly, though, is Jedikiah’s sociopathy, demonstrated by his paint-by-number relationship-building techniques. There are several direct parallels between his interactions with the young John and present day Stephen, most notably his omnipresent use of, “son” to refer to them both. This might have been effective if we’d started with any sense that Jedikiah cares for his nephew, which would then have been cruelly undercut when we see him use the same schtick on John, but we don’t believe for a second that Stephen means anything to him. Mark Pellegrino is usually a very charismatic and engaging actor, but as Jedikiah he’s mechanical and cold. This could be by design- perhaps Jedikiah has no capacity for emotion. But if we’re not meant to connect with the character on any level, even as a deliciously hate-able villain, then we’re spending far too much time with him.

While John killing Killian is effective and carries a surprising amount of weight, it feels like a wasted opportunity. Why build up a significant backstory only to never show it? Perhaps Dohring will be back in the future to flesh out John’s past at Ultra, but for now, it feels like a door with a lot of narrative potential has been slammed shut, and it’s a shame. The show may have its effects and fight choreography down pat, a not-unimpressive feat only four episodes in, but it has a long, long way to go if it wants its audience to invest in these characters.

What did you think of this episode? Anyone else wish these were two separate episodes, one with John and Killian and another with Stephen, his mom, and Jedikiah? When can we stop pretending Steven’s in high school (soon, pretty please!)? How long before more of the cast are processed into killers? Post your thoughts below!