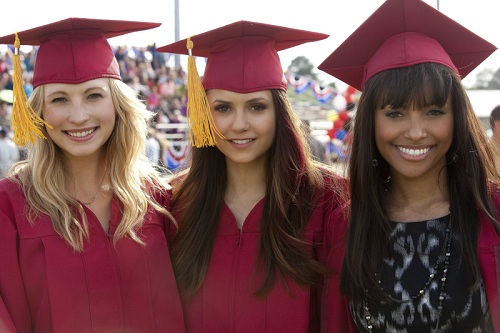 This week, on The Vampire Diaries: Everyone graduates, we meet Silas, and Elena makes her choice

The Vampire Diaries has had a wildly uneven season four. Yes we’ve had all-time best episodes like “Memorial” and, in particular, “Stand by Me”, but we’ve also gotten episodes that are downright dreadful, such as “After School Special” . The central character has been all but abandoned as a priority, with any agency or sense of self missing from Elena for the majority of the season, the Big Band has been almost completely bungled, and many of the supporting and periphery characters have been written horribly inconsistently. It’s not surprising then that the finale should suffer from many of the same problems as the rest of season four. There are several things this episode did very well, but even more they got wrong.

First off, the positive: On the whole, the decision to bring back ghosts to Mystic Falls en masse works as it was intended- an excuse to see Alaric, Lexi, Jeremy, and Connor and Kol again. It’s also a failure narratively, as the town should be absolutely overrun, with every person in Mystic Falls affected, but if you turn off the part of your brain wondering why everyone else our heroes have killed aren’t back for vengeance, it’s great to see some of our favorite characters again, on both sides of the fight. As in last week’s episode, Alaric’s presence instantly helps any scene he’s in and Lexi’s best friend bonding time with Stefan is wonderfully indulgent. The two of them having a season one-style dance party to, “You Give Love a Bad Name” is perfect, though it’s very surprising not to see a more emotionally intimate scene between them. It’s great to see their relationship not turn romantic here, but it feels strange to not see a hug, a heart to heart about what Lexi’s meant to Stefan, or even a greater sense of anger from Lexi towards Damon for, you know, killing her. Jeremy’s scenes with Elena and Alaric are heartwarming- this is the first time she’s felt like herself in a very long time and yes, it’s a cheat, but it’s still a welcome sight. 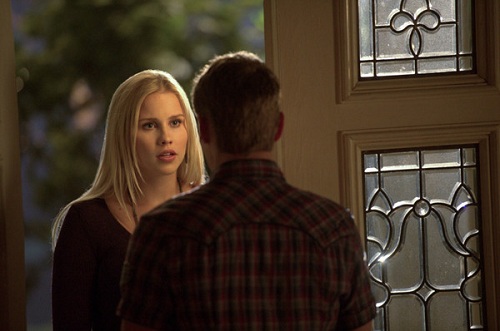 One of the most successful returns, though, is that of Connor. He was a fantastic villain for the beginning of the season and, while Elena’s murder of him was very well handled and an important beat for her character, his impact here only puts in starker relief how utterly unsuccessful Shane and then Silas have been as villains this season. Alexander only seems to be back because they can’t have Connor in two places at once, but the latter is so effective, even Connor-by-proxy works. By the way, perhaps the single best decision, ghost-wise, is leaving Shane well out of it- let’s all try to forget he was in this season.

There are other elements that work too- Klaus’ return and conversation with Caroline both make sense for the character and do important legwork in positioning him as a sympathetic lead for The Originals in the fall (again, turn off that part of your brain reminding you he drowned Tyler’s innocent bystander mother and led RipperStefan on a killing spree). Keeping Bonnie dead is a pleasant surprise; the PtB not undoing that is so welcome that their undoing of Jeremy’s death isn’t even all that frustrating, despite it not making a lick of sense. Matt and Rebekah’s scenes are cute and the notion of them gallivanting around the world for the summer is a happy one- it’s about time Matt had some fun! Finally, it’s been stretched out for a season, but we do at long last get an end to the Elena/Salvatore bros triangle. Does it make much sense for the character? No, but at this point, Stefan’s better off without her and we’re so tired of mopey third-wheel Damon we don’t really care how he gets the girl. 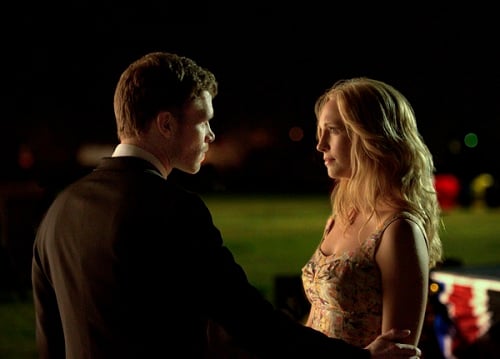 That unfortunately brings us to the negatives. The largest and most glaring is clear from the title- graduation. They hold the graduation ceremony rather than postponing it all of a day. Everyone attends. Anyone attends. Anyone cares! These are all significant problems. High school graduations get rescheduled for rain all the time- when the town sheriff and mayor both know what level of badness is going down, there’s no possible acceptable explanation for gathering a giant group of potential victims, make that spectators, in one highly volatile place. Other high school-set shows have timed important events up to the characters’ graduation ceremony but usually those events don’t include the potential end of the world. And when they do (most notably in Buffy), the timing is a deliberate, utterly in-character choice by the guy doing the world-ending, not a coincidence, and the students have an important reason to attend- they need to do so to save the world. It’s somewhat in character for Caroline to care about graduation, though it highlights her persistent childish streak, but why is she celebrating that they all made it to graduation when her One True Love Tyler can’t be there?

Katherine is another problem. Her motivations in this episode come out of nowhere. We know she’s angry at Elena for potentially scaring off Elijah from her, but her newfound jealousy of Elena’s perfect life does not ring true. Giving her the Cure should be a shocking twist, but it’s instead a complete narrative waste. First of all, this should ensure her capture by Klaus, who must still want doppelganger blood, making her assumed absence this fall from The Originals all the more inexplicable, but even more, this was an opportunity for the series to address one of its big problems, its overly super cast, and rather than making a bold move, like having one of the Salvatores or Rebekah take the cure, or working the plutonium so it could bring back Lexi, Alaric, or anyone else as a human (who could then actually appear on the show), the writers chose to maintain the status quo. This didn’t use to be a show where that happened. 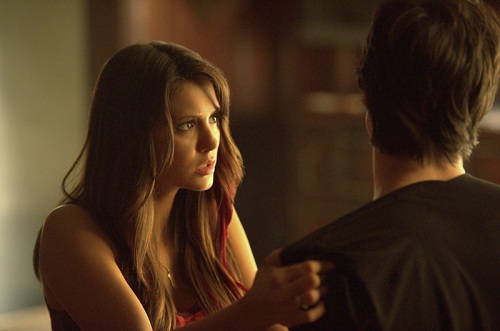 The final big problem is the reveal of Silas’ face and Stefan’s role as a second doppelganger. There is absolutely no need for this. Not only is the sinking of Stefan an unfortunate further parallel of storytelling on Angel (the number of overly similar plot points is ridiculous at this point), there is no reason Silas needs to look like Stefan to assume his identity. He can look like anyone. Why introduce a new arbitrary plot twist like this? Isn’t one magical doppelganger enough? And given how utterly unsuccessful Silas was as a villain this season, and the fact that he’s now unkillable, why should that change this coming season? Getting the previous unkillable psycho season-long Big Bad who overstayed his welcome off the show (Klaus) was enormously overdue. To have him immediately replaced with another is beyond frustrating and reason enough not to tune in next year.

The Vampire Diaries remains a hit for the CW and one fans are eager to tune in for, but after reaching creative heights in its second and early third seasons, the series has lost much of the good will it earned with its exciting storylines, emotional character beats, and strong and independent female characters. At this point, this reviewer and former fan has no interest in tuning in next season. The writers have turned things around before, though- hopefully they take full advantage of the hiatus to right the ship.

What did you think of this episode and this season as a whole? Anyone glad we spent so much time with April and Shane this season? Was Bonnie for Jeremy a good trade? What are your hopes for next season? Post your thoughts below!