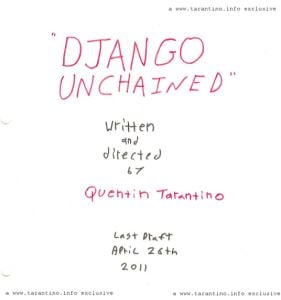 Well it seems that now it is official. Quentin Tarantino’s latest script, is indeed a spaghetti western titled Django Unchained. Franco Nero first hinted at the posibility of Taranino taking on the genre back in February, a project that is now confirmed to tie into the character that Nero played in the 1966 film Django, while somehow relating to Takashi Miike movie Sukiyaki Western Django. I’m not sure how that will work but according to the Collider, a source read the script and sent Shadow and Act a plot synopsis that read, “Django is a freed slave, who, under the tutelage of a German bounty hunter (played by Christoph Waltz) becomes a bad-ass bounty hunter himself, and after assisting Waltz in taking down some bad guys for profit, is helped by Waltz in tracking down his slave wife and liberating her from an evil plantation owner.”

Thompson on Hollywood confirmed with agency WME that Waltz is on board; and apparently Nero indicated Keith Carradine and Treat Williams will also appear. According to Deadline, the project is moving very quickly, and Tarantino is reuniting with Pulp Fiction producer Stacey Sher, as well as the Weinstein Company who will handle domestic distribution. Tarantino is also speaking with Universal, Warner Bros., Sony, and Paramount about co-financing and foreign distribution. Universal is the best bet, hoping to continue their relationship with Tarantino after Inglourious Basterds earned the studio $193 million in international box office and $314 million overall.