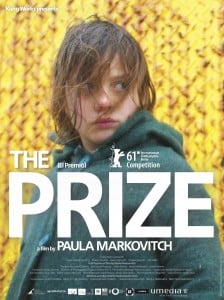 Written and directed by Paula Markovitch

After winning an essay contest at her school, seven-year old Cecilia (Paula Galinelli Hertzog) is showered with praise. Her teacher has the entire class form a line, and one-by-one, she has everyone give Cecilia a congratulatory kiss on the cheek. That is, except for one.

Cecilia’s best friend, Silvia (Sharon Herrera), refuses to acknowledge her achievements, and when she is confronted, she says to her, “you pretend to be intelligent, but you’re just bad.”

This statement is prophetic in its simplistic irony, because Paula Markovitch’s The Prize, which won a host of accolades at the 61st Berlin Film Festival, is a film that tries to affect greater importance and artistic significance, but under the many layers of pretention, it’s just simply bad. Set during Argentina’s ‘Dirty War’, Cecilia Edelstein and her mother (Laura Agorreca) have recently moved to a remote coastal town, following the disappearance of her father. Although preoccupied with her safety, her mother enrolls her in school, where she must promise to never divulge their family secret.

For those that don’t know, ‘The Dirty War’ was a period of state terrorism in Argentina from 1976 to 1983. Victims included Marxists, journalists, students and alleged opposition sympathizers. Predisposed knowledge of this is key before watching The Prize, because the film itself never mentions a thing.

Was Cecilia’s father a journalist? A Marxist? A sympathizer? We don’t know what the ‘family secret’ is, and neither does Cecilia, and, on the surface, that seems to be the film’s intention. We’re supposed to see this as a story of a young girl trying to live a normal life under ambiguously dangerous circumstances.

But because the intentions are so vague and the exposition is so poorly elucidated, the film takes on a far different perspective. Although we are meant to contrast Cecilia’s childhood innocence with the oppressiveness of the state, there is never a genuine feeling of persecution.

The majority of the film depicts her mother taking extreme precautions against something, but there aren’t any scenes that actually suggest a real world threat. The military is mostly absent from the film, and when they are featured, they don’t seem very tyrannical at all (by military standards, at least).

This turns the picture into somewhat of a psychological thriller, where we consistently question the mental faculties of the mother. Is she crazy? Is she delusional? Is there really a threat to their livelihood? Did Cecilia’s father even disappear? Because the film never overtly, or even subtly, mentions the actuality and dangers of the ‘Dirty War’, The Prize, for a brief period, had the potential to be like Rosemary’s Baby or Martha Marcy May Marlene. We come to question if all this tension is simply in the mother’s head, with Cecilia having to deal with the unexpected consequences. However, this forlorn hope is dashed when her mother’s anxiety is matched by her teacher’s, in a scene that is the film’s best but most disappointing. This confirms the ‘threat’ to be real, but because we never learn the nature of it, it feels antiseptic and lacks urgency.

What’s left is a small grain of a story, which, equipped with a better editor, would’ve made for an intriguing short film. Instead, The Prize is inundated with excessive and superfluous scenes that don’t add much and drags the length to an interminable 99 minutes.

The worst examples are when Cecilia and her mother must bury books (which is, again, never explained), Cecelia’s interaction with a schoolboy, and the number of irritating scenes where the film will literally try to annoy you. The movie is an overall unpleasant experience, and a pretentious one at that. It’s essentially an extremely poor woman’s version of a Sofia Coppola film. The only positive that can be taken away from it is the fine performance of Hertzog, although her character can ultimately get on your nerves.

The story is purportedly based on the actual memories and childhood experiences of the director, Paula Markovitch, but, as anyone can tell you, it’s hard to vividly remember what happened to you at age seven. The best you can recollect are vague, random, and incoherent sequences, and that’s exactly what her film amounts to. Watching The Prize in totality is an unsavory Pyrrhic victory.