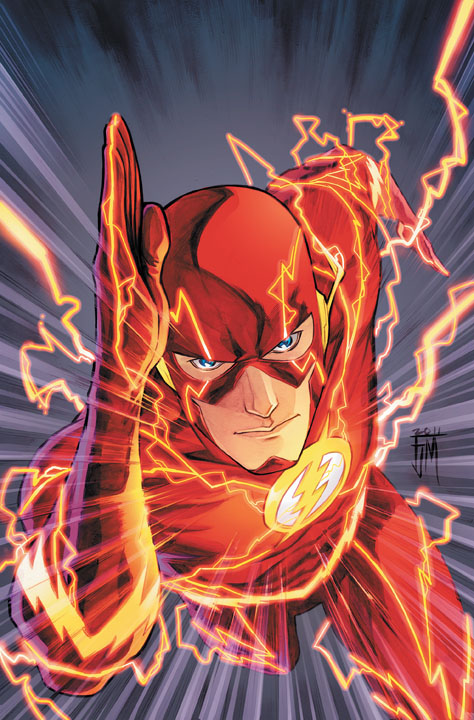 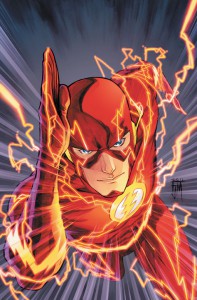 Powers and Abilities
Super-speed, including the ability to run up walls and over water, to create powerful updrafts of air by running in a circle, and to vibrate his molecules at such a speed as to pass through solid matter and the walls separating different realities. And yes, he’s faster than Superman.

Gadgets and Accessories
The Cosmic Treadmill allows Flash to travel through time and into other dimensions; his entire costume can be compressed to fit inside his ring for storage.

Movies and Appearances
Barry Allen was the Flash featured in the Super Friends cartoons, and”Barry Allen” was one of the alias used by Frank Abignale (Leonardo DiCaprio) in the film Catch Me If You Can.

That nod aside, Flash has never really had a chance to make it on the big screen, but he did have his own live action TV show in the early 90s, starring John Wesley Shipp, and the CW is giving the character another shot on the small screen with a new series spinning off from Arrow, starring Grant Gustin as the Scarlet  Speedster. 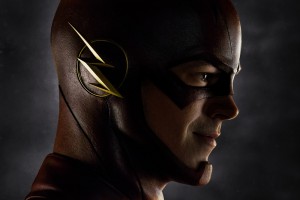 One-Sentence Origin
When a lightening bolt strikes his lab, police scientist Barry Allen is doused in chemicals that transform him into The Flash, the fastest man alive! 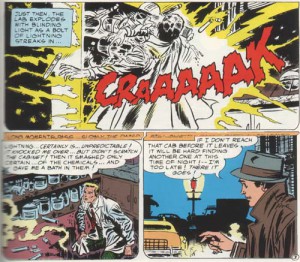 Memorable Moment
Crisis On Infinite Earths #8 1986: Captured by the Anti-Monitor, Flash escapes and sacrifices his life to save the remaining universes in the “Multiverse” and all their inhabitants. 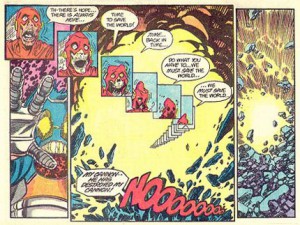 Austin’s Analysis
The first appearance of Barry Allen as the Flash in Showcase #4 is considered by most comic fans and historians as the start of the Silver Age of superhero comics. Barry later planted the seeds of the DC Multiverse by meeting his Golden Age counterpart. When DC decided to prune that multiverse, Barry died in the process, which seems fitting. 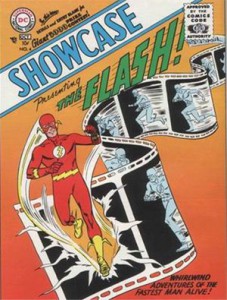 For many modern readers, including myself, reading comics post-1986 (after Barry’s death), Flash has always been Wally West, who took over the mantle after Barry’s death. I’ve always thought of Barry less as a character and more as a martyr and a thematic representation of DC’s history: the herald of the Silver Age who died when DC made a conscious decision to move away from the style of storytelling that had defined that era for them (even if, as a kid, the Flash I was most familiar with thanks to cartoons and whatnot was Barry).

Barry’s death also established a theme almost exclusive to DC’s comics, a unique and captivating element of their characters: legacy. That of one hero training another to someday take over for or otherwise honor an existing hero. No “family” of characters illuminates this more than the Flash family: Barry mentored a sidekick, his nephew Wally, who after Barry’s death “graduated” from being Kid Flash and became Flash in his own right. Wally, in turn, eventually mentored his own Kid Flash, Barry’s grandson Bart, and so on. 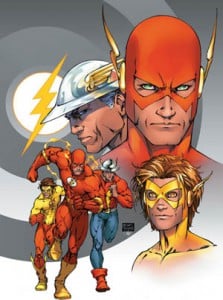 Which is all my long-winded way of saying I don’t “get” the resurrection of Barry Allen as the Flash, nor see what need there was to bring the character back. Even by Silver Age standards, and amongst some of his most fervent fans, Barry, as a character, was considered fairly dull, a straight-forward do-gooder that put on the visually stunning Flash costume and got involved in zany Silver Age adventures. His most defining character trait, beyond the virtues shared by all heroes of that age, seems to be the running gag of how, despite being the fastest man alive, he was constantly late for dates with Iris. Flash was a great character. Barry himself was fairly lackluster and undefined. Barry passed on while the Flash continued.

All of which seems to suggest that Barry works better dead than alive, as a martyr and an important part of the Flash legacy, than as a character in his own right. Of course, Barry has now been back in the driver’s  seat of the Flash legacy long enough that an entirely new generation is coming to think of him as “their” Flash, a notion that will only increase if Flash’s second live action TV show proves more successful than his first, putting Barry Allen in front of millions of eyes each week. Hopefully, the character will prove worthy of his second chance. 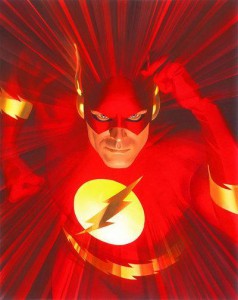