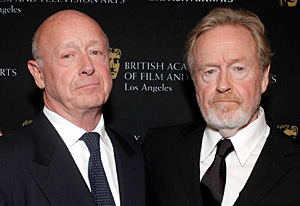 It seems like more and more filmmakers are making the transition from the big screen to television. Martin Scorsese was lured to direct last year’s standout HBO series Boardwalk Empire and also serves as executive producer and who can miss the fact that Steven Spielberg currently has his fingers in several pies producing the upcoming FOX  time travel/dinosaur drama Terra Nova, TNT’s alien invasion series Falling Skies and NBC’s Smash. Even Netflix has managed to attract minds like David Fincher and Kevin Spacey for their first ever original series House of Cards.

Now it is time for the Scott brothers to dabble in the land of television again (since this is not their first foray, they currently serve as producers on CBS’ The Good Wife). Prolific brothers Ridley Scott (Blade Runner, Robin Hood) and Tony Scott (Unstoppable) are decidedly going to be more adventurous this time around and are currently in negotiations with FOX  to bring to life a 10-13 episode limited series slated for Summer 2012 called Pyrates. Per Deadline, the series is described as “a gritty portrayal of the men and women who pulled off the largest heist in pirate history — the capture of the Spanish silver fleet in 1628 — sparking the golden age of piracy, a time when there was greater honor amongst thieves than those who hunted them.” and is based on historical events.

The companies involved are already considering an international co-production model while scouting is already in motion for locations like Australia and the Caribbean. The series is created by Barry Schindel (Law & Order, Numb3rs) and director Stephen Hopkins (24, Predator 2) is on board to direct the first episode. Results of the negotiations should be public within the next few months