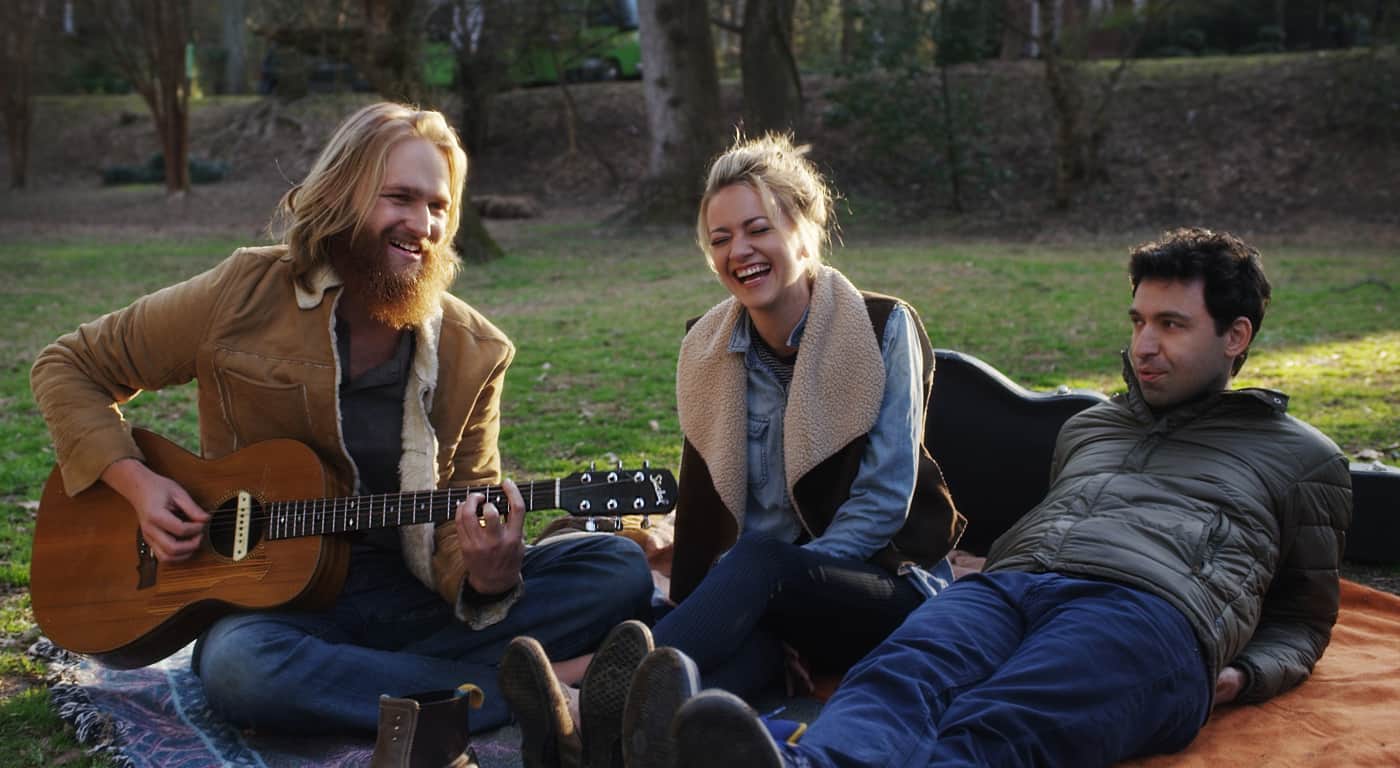 Folk Hero and Funny Guy is a breath of fresh air .  As much as I adore Seth Rogan, not all guys are passionate about a great fart joke. And, as much as I geek out on superhero movies, it’s important to see more relationships between men that actually exist in real life. Modern guys grappling with legitimate concerns in ways that feel realistic was refreshing and a necessary relief.

Jason Black (Russell) and Paul (Karpovsky) play life long bffs who go on a soul-searching road trip through small town America.  Jason has become a very successful musician while Paul is struggling to get his stand-up comedy off the ground, keeping his former life as an advertising super star in his back pocket. Black suggests Paul join the road trip thru small venues to hone the comedy act. Problems immediately arise based on fundamental questions about fame, innate star power, those who struggle for success and those who come by it fairly easily. Jason has always been the kind of guy where great things eagerly jump in his lap and ask “how can I make your life even better for you?” He pushes Paul to abandon his advertising career completely and give everything to making it as a comedian. But, Paul is the kind of guy where success keeps a nice distance and needs a lot of convincing.

The best part of Folk Hero and Funny Guy is ironically how perfect Wyatt Russell is as a Folk Hero. It’s a major breakout role. He’s so good that in the end my biggest disappointment was that Jason Black doesn’t exist. Russell could have a legitimate career in music. The music is by far what I enjoyed most about the film and would snatch up the soundtrack in a second. I secretly hope Wyatt Russell decides to go on tour as a musician because I’d love to see more. His performance truly is reason enough to check this film out (and yes it’s life imitating art).

But, what’s interesting about Folk Hero and Funny Guy is it’s subtle exploration of the pitfalls of being an easy superstar and the advantages of being someone who has to always work hard for it. Throughout the road trip, Black is revealed also be arrogant, naïve, spoiled, passive aggressive, manipulative and incapable of sustaining a romantic relationship. And, though Paul bombs night after night, he reveals important qualities that Black is missing.  A major highlight is the scene where Paul breaks out as a comedian and the solution he finds that’s right for his career. It takes on complicated issues of what success looks like, why “throw it all away and only follow your dream!” not working out isn’t necessarily failure, and why easy success doesn’t always lead to happiness.

What I didn’t enjoy is many of the conversations feel dull and meandering and moments that are suppose to be really funny fall a bit flat. The chemistry between the two co-stars doesn’t feel like they have been friends since childhood and I think that’s why the big jokes don’t quite land. Also, the ending to Black’s story feels unsatisfying, rushed and confusing.

Still, it’s a fresh film about two best friends who need each other to be their best selves. It feels like a throwback to 80’s buddy comedies where recognizable guys went on great adventures together. And David Cross’s tiny role is genius. These guys are worth traveling with. Though imperfect I enjoyed it so much more than another guy with super powers and million dollar special effects.