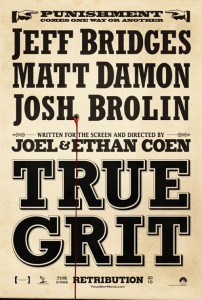 “The Coens once again demonstrate why they are among the very few American filmmakers worth anticipating and they hardly disappoint”.

If in some way, No Country for Old Men was about an innocence lost that never existed to begin with, the Coen Brothers’ newest film, True Grit, champions childhood ideals that do exist and are unfortunately compromised by age and experience. The rigid faith that Mattie Ross (Hailee Steinfeld) has in justice is consistently undermined by the failures of selfish and idiotic adults. Though she is not naive enough to believe that most people act without keeping their best interest at heart, she holds a sustained belief in a higher moral and administrative power.

Like most great modern westerns, the frontier era of American history is emphasized as a fleeting moment. One decade’s Gods are side-shows for the next generation to debase as relics of cheap entertainment. Even in the time period where most of the film’s events take place, men like Rooster Cogburn (Jeff Bridges) are being de-mystified in the American court system as drunks and murderers. The need for bounty hunters is waning as “civilization” spreads and institutions grow in power. It is quickly evident, though now old and fat, Cogburn had never been an empowering figure. This is, however, minimized, as the oppressing force of a society that created men like him, only to disregard them as outsiders once their role was complete lingers over the film.

This disposability of human life is reflected very deeply at the heart of Mattie Ross’ quest to avenge her father’s death. She

understands that in a town where no one knew her father, his death would go unnoticed. It has had irreversible changes on her own and she has a strong desire to convey that to the people she meets, but most especially Tom Chaney (Josh Brolin), the man who shot her father in the back. She never quite correlates the institutions she has such powerful faith in with her father’s demise. Though it is folly to believe that one can live a life without money, the power of the dollar trumps any and all morality in this film. Even when Chaney is eventually found, he is not threatened with death but with not getting paid. This sends him into a confused and angry diatribe.

Mattie’s faith in the world is very much real in spite of the many obstacles that challenge it. It has a redemptive quality and though she is never able to change the nature of man, her strength and composure suggests a possibility for a stronger tomorrow.  Her intelligence, inquisitiveness and incredible confidence in herself hint at the virtues of a bureaucratic system sustained by a collective desire for order and fairness and motivated by an individual’s pursuit for self-improvement. The “seriousness” of the film is undermined by the typical Coen wit, and they exploit the colourful characters of the Western genre in order to emphasize the absurdity of this birthing nation. The film is more a comedy than a drama, in spite of its occasionally heavy material. Though quite beautiful, the Coens seem to consciously skirt iconography, undermining or humourizing nostalgic and patriotic imagery for the old West. It is only one sequence, in the film’s final act, which can only be properly compared to the river sequence in The Night of the Hunter, where the film’s imagery is allowed to achieve a moment of dreamy transcendence.

As can be expected, the film is beautifully acted, and though obviously cast for type, each performances offer unexpected moments of depth and surprise. Though not quite on the same level as the Coens’ best work, it is nonetheless a great film and one of the year’s best. It speaks for the incredible quality of their output that this does not rank among their top couple of films, as many filmmakers would only hope to make a film half as good as this. The Coens once again demonstrate why they are among the very few American filmmakers worth anticipating and they hardly disappoint.