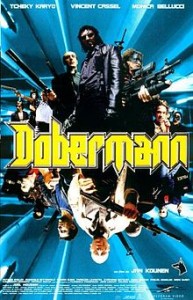 My first introduction to Vincent Cassell was in 1997 when I saw him in Mathieu Kassovitz brilliant and controversial black and white French film La Haine, one of my ten favorite films of all time. That same year I decided to also check out Jan Kounen’s Doberman which also starred the famous French actor. These two films served as my gateway to contemporary French cinema. Doberman (based on a series of novels by Joël Houssin), was fantastic, an over the top, highly stylish but extremely entertaining heist  film following the criminal known as Dobermann (Vincent Cassel), who leads a gang of brutal robbers with his beautiful, deaf girlfriend Nat the Gypsy (Monica Bellucci).

Now fourteen years later, Screen Daily reports that the star is in talks for a sequel to the crime flick, with Marco Polo Productions and Acteurs Auteurs Associés (also behind the international heist flick Sleight of Hand)backing the movie. Joël Houssin will again write the script, and actor Tchéky Karyo who played the psychotic cop will reprise his role.

Producer Rionda Del Castro was quoted saying “Audiences all over the world have been waiting over 12 years for Dobermann 2 and this will be a spectacular action-packed European production, shot in French and English with not only French actors but also an international cast.”