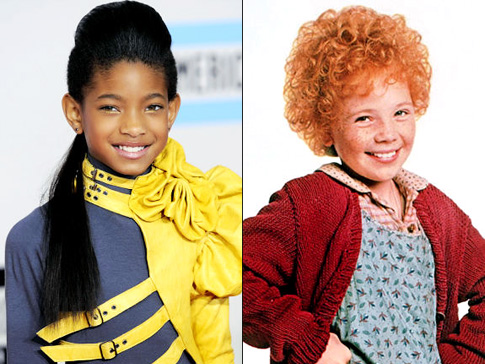 The Smith clan is certainly trying to take the world by storm with parents Will Smith and Jada Pinkett Smith already established veterans, now their children’s stars are on the rise. Son Jaden already took on The Karate Kid remake last year and has collaborated musically with Justin Bieber. Daughter Willow already has a hit song and upcoming record on her belt and now Deadline reports that she plans to tackle acting in a lead role in a “re-imagining” of the hit Broadway musical Annie, the famous story of the adventures of a red-haired orphan. Overbrook Entertainment, a production company that Willow’s parents are partners in, is behind the proposed production.

With it being set at Sony Pictures, the studio has approached Ryan Murphy, mastermind of the television smash hit musical Glee and who’s last directorial feature effort was Julia Roberts’ Eat, Pray, Love, to direct. As the offer has just gone out, it is too early to tell if he will sign on or not. Rapper Jay-Z is also a co-producer with Overbrook on this project, one of several the partnership plans to produce, and possibly will deal with the music for the film.