Star Wars Tales is a quarterly anthology series published by Dark Horse from 1999 to 2005. Each issue was 64 pages long and contained a variety of stories, in both number, length, content, and tone. Most stories were considered non-canonical “Infinities” stories unless canonized elsewhere (though of course, now all such stories are deemed non-canonical “legends”). In the course of its six year run, Star Wars Tales featured stories from dozens of different creators, covering numerous facets of the Star Wars universe, from serious, thoughtful tales to comedic ones to straight-up fan-demanded “what if?” type stories. Here are ten of the best, entertaining in their own right but also representative of the breadth of content available in this series (all of which are currently available to subscribers of Marvel Unlimited, and were earlier collected into six trade collections that can probably still be found on Amazon and the like). 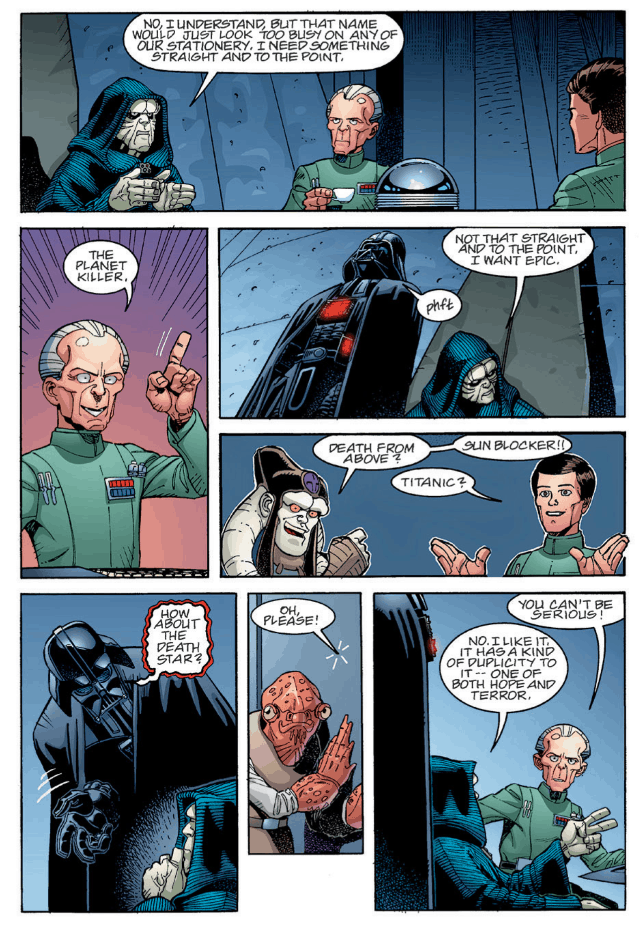 Kevin Rubio (creator of the Cops spoof Troops) and Lucas Marangon carved out something of a niche for themselves for a few years at Dark Horse, turning in stories with a comedic bent either in Star Wars Tales or standalone series (like the various Tag & Bink one shots), stories with bright, cartoony art that were very tongue-in-cheek, but still connected to the history of the Star Wars universe. This is the first notable such story, one which posits a brainstorming session amongst the Imperial higher-ups (including the Emperor, Darth Vader, and Grand Moff Tarkin) to determine the name of the Death Star. 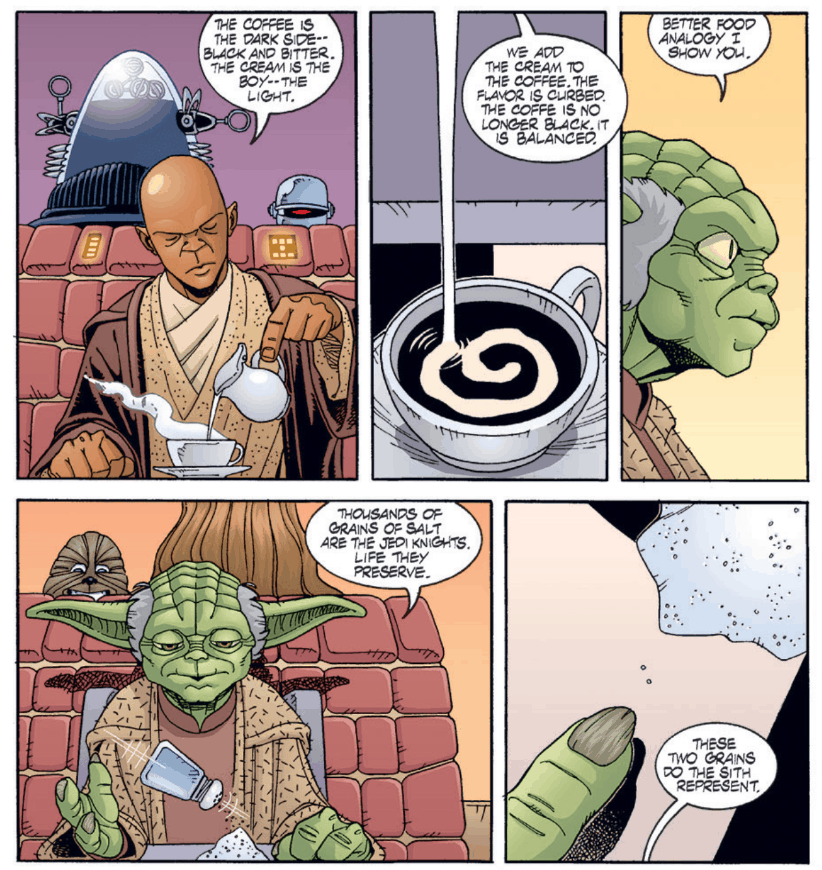 Another Rubio & Marangon story, this is ostensibly a parody of Pulp Fiction (specifically the diner scene, with Yoda and Mace Windu in the Vincent and Jules roles), which of course were all the rage in the late 90s and early 00s. But this story is notable for the perspective it gives on the whole “bringing balance to the Force” prophecy that got introduced in the Prequel Trilogy but never really paid off directly. Using table salt as a visual metaphor, Yoda suggests that bringing balance to the Force may not be a good thing for the Jedi, as it could mean bringing the numbers of the existing Jedi (numerous) down to two, the number of active Sith, thus attaining balance between both sides. It’s a thought-provoking perspective on an under-developed idea, and depending on whether you believe it is Luke or Anakin who fulfilled the prophecy, Yoda’s speculation mostly plays out. 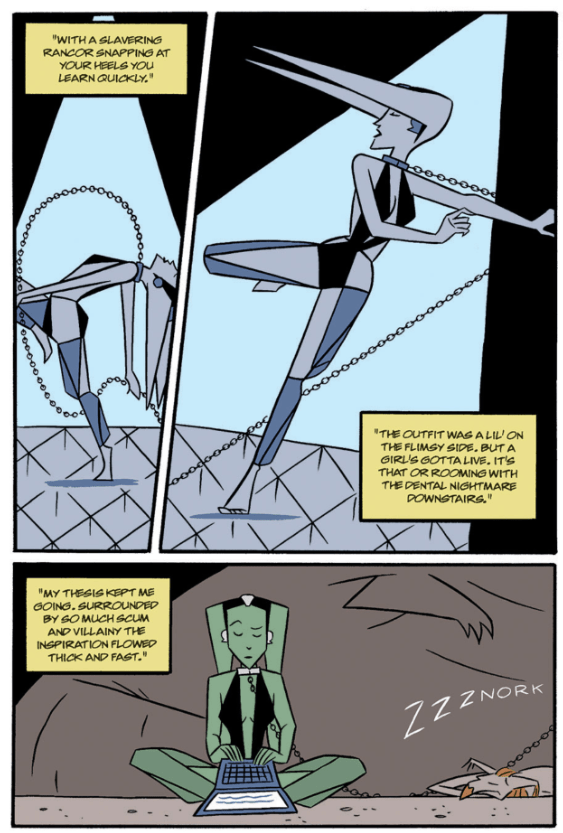 “The One that Got Away” stars a liberal arts student named Mina who gets sold to Jabba to become one of his dancing girls, but manages to stay alive and use the experience to improve her thesis. Not only does it do something different with the problematic “imperiled dancer” sequence from Return of the Jedi, but both Mina’s voice and Watson’s minimalist, angular art make the story look and read like nothing else in the Star Wars universe. 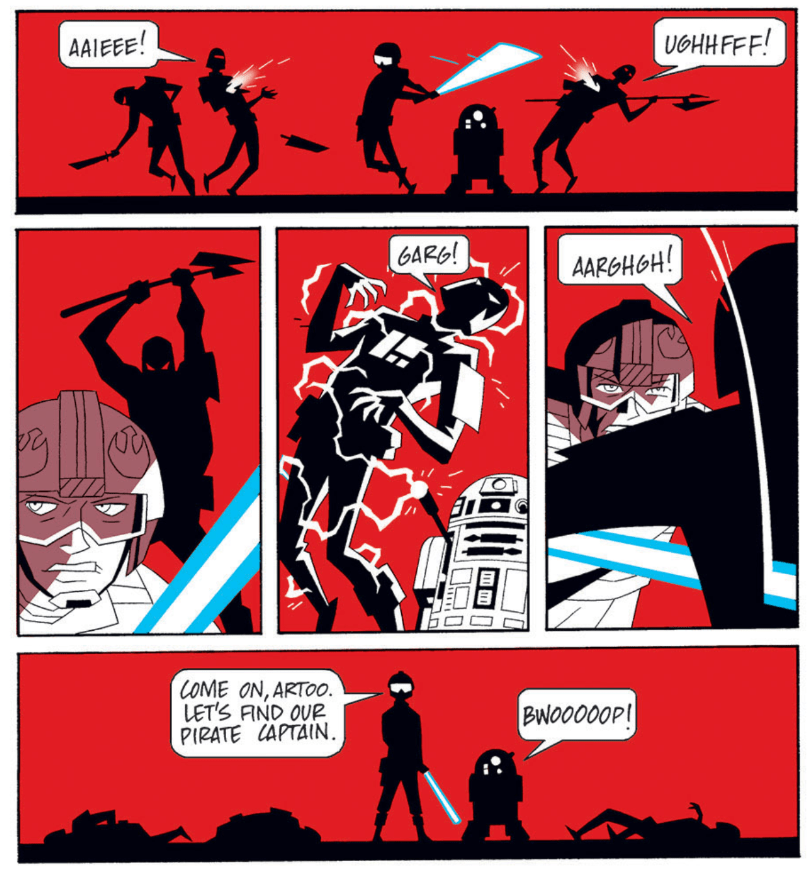 Another story that stands out thanks to minimalist art, “Death Star Pirates” reads like an episode of a Star Wars animated series produced by comic artist and Hellboy creator Mike Mignola, in which Han, Leia, Chewie and Luke team up to defeat a group of pirates targeting the Millennium Falcon. The plot is slight but has a few twists and turns, and the energy is enough to carry the story, with the use of color and light reminiscent of the later work of Genndy Tartovsky in the original Clone Wars animated shorts. 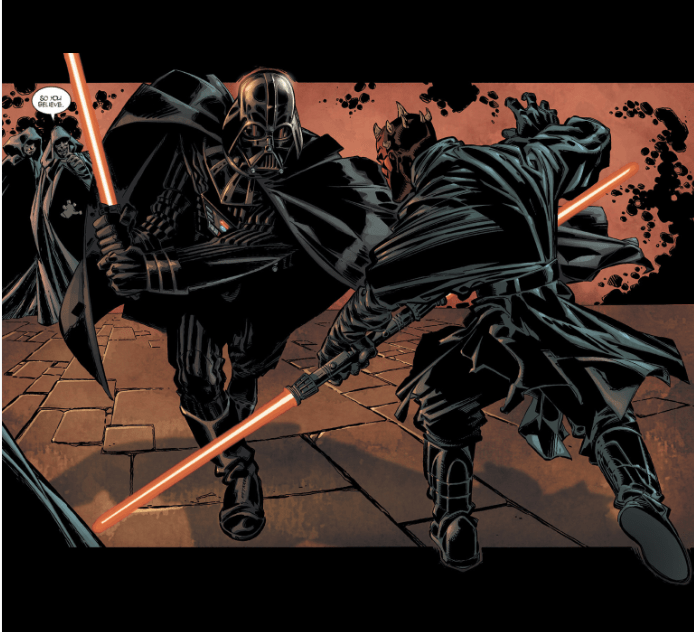 This is the kind of story Star Wars Tales was made for, and it’s kind of surprising it took the series nine issues to get to it: Darth Vader vs. Darth Maul. Some lip service is paid in the story to how this is possible and why Maul was resurrected (the story being written years before Clone Wars canonically revived Darth Maul), but given the “anything goes” mandate of Tales, the why isn’t really important. What matters is seeing two of Palpatine’s Dark Side heavies, two fan favorite villains, throw down. Plus, the setup stays clear of fan fiction territory thanks to the work of creators Marz, Leonardi and Austin, three veterans of the superhero comic book industry; combined with the subject matter, it makes this story perhaps the most purely comic book story of them all. 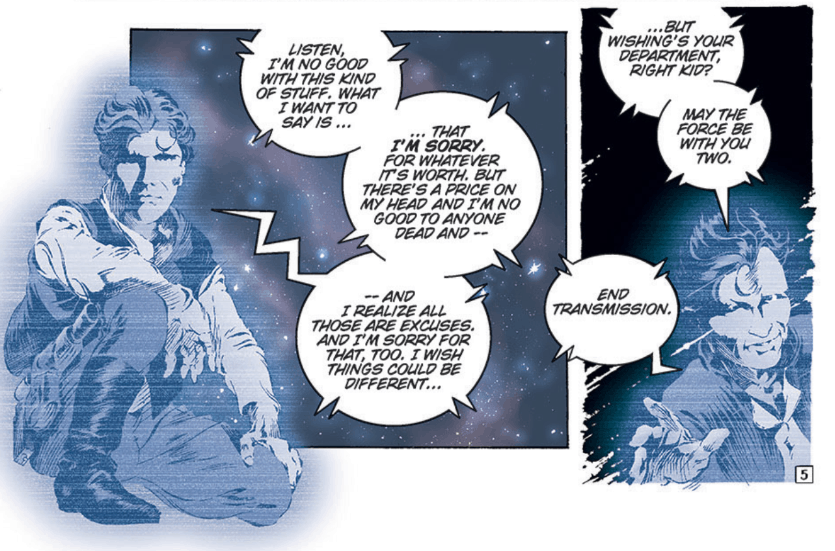 A surprisingly poignant tale that speaks to R2-D2 and C-3PO’s roles as the storytellers of the Star Wars saga. With Artoo slated to have his memory wiped as part of some overdue maintenance, Threepio discovers the droid evading the work, concerned over losing the recorded stories he carries with him, personal memories delivered by Han, Leia and Luke at various points in the Original Trilogy (including Han leaving Luke a less flippant goodbye before leaving Yavin 4 in A New Hope, and Luke wondering what to do next following the end of Return of the Jedi). Not only does it affirm Artoo’s role as legitimate confidant to his friends, it also reminds us of the power of memory and recorded history. 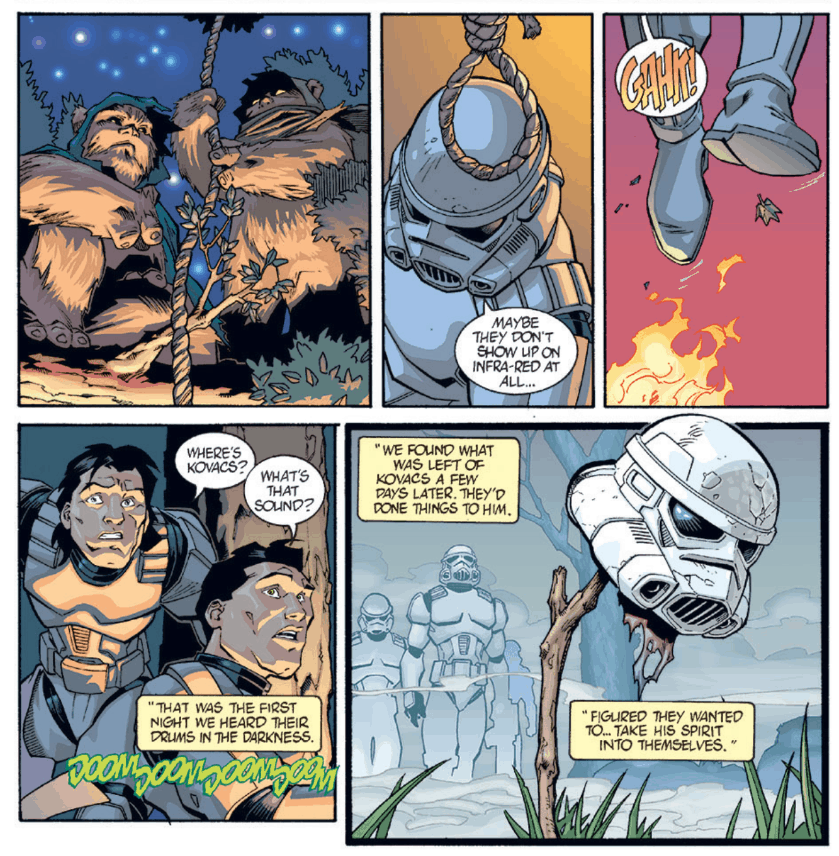 This story, set shortly before the events of Return of the Jedi as the Imperials are establishing a garrison on Endor, reinforces the idea of that the Ewoks are, essentially, carnivorous murder bears, carrying out savage and brutal attacks on the Imperial forces invading their homeworld (after all, for all their toy-worthy cuddliness, it’s worth remembering that the Ewoks were at one point planning to roast alive, then eat, the film’s heroes). The bright, almost cheerful artwork from Clayton Henry juxtaposes well against the savagery of the Ewoks, highlighting the tension between the Ewoks cute appearance and their primal, violent tactics. 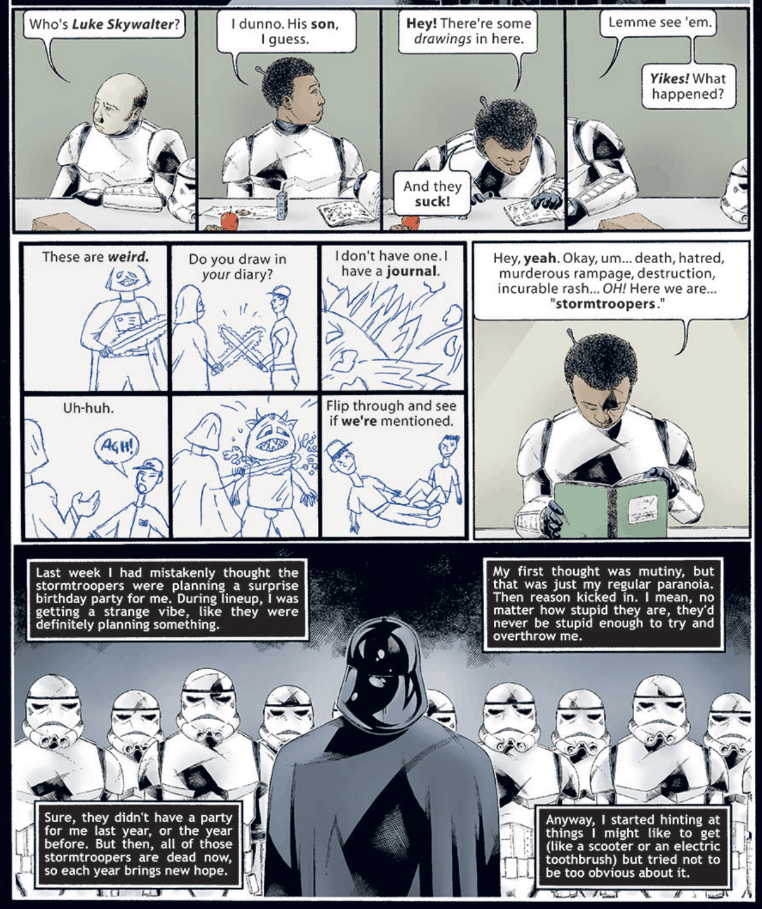 Another mostly-comedic tale, this one involving a pair of Stormtroopers who discover Darth Vader’s diary, and from it, what a sad-sack their oft-ominous boss really is. A story that takes full advantage of the details setup by the Prequels to contrast the whiny, petulant Anakin with the fearsome Darth Vader, featuring some unique art more akin to a comic strip. 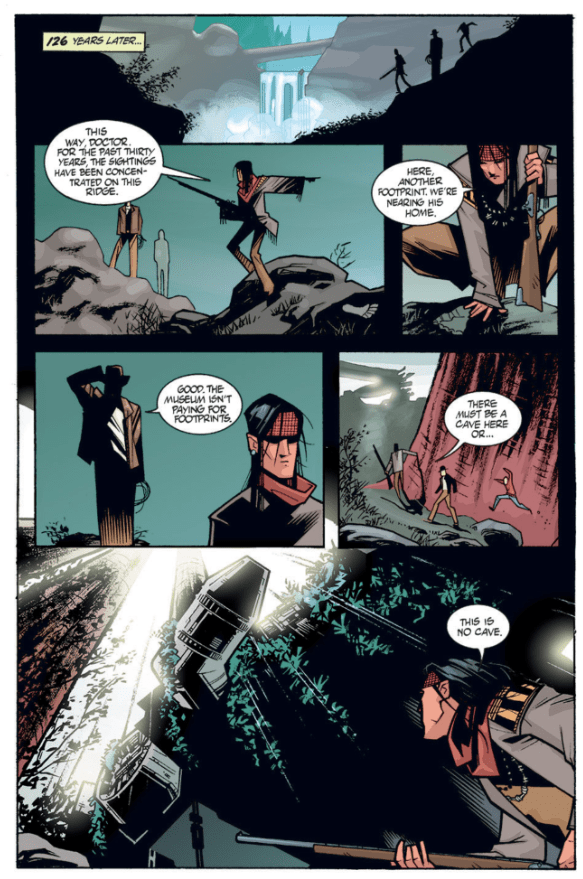 A trippy tale with gritty art, this story is basically “what if Han Solo met Indiana Jones?”, as Han and Chewie make an unplotted jump into hyperspace and end up crash landing on an Endor-like planet. Encountering some natives, Han is killed, and a century later, the Falcon is discovered by a fedora-wearing archaeologist and his young partner, who decides to leave without investigating the rumors of the Sasquatch-like creature living in the trees. Again, like “Resurrection”, it’s the kind of slight but fun story for which this series was made. 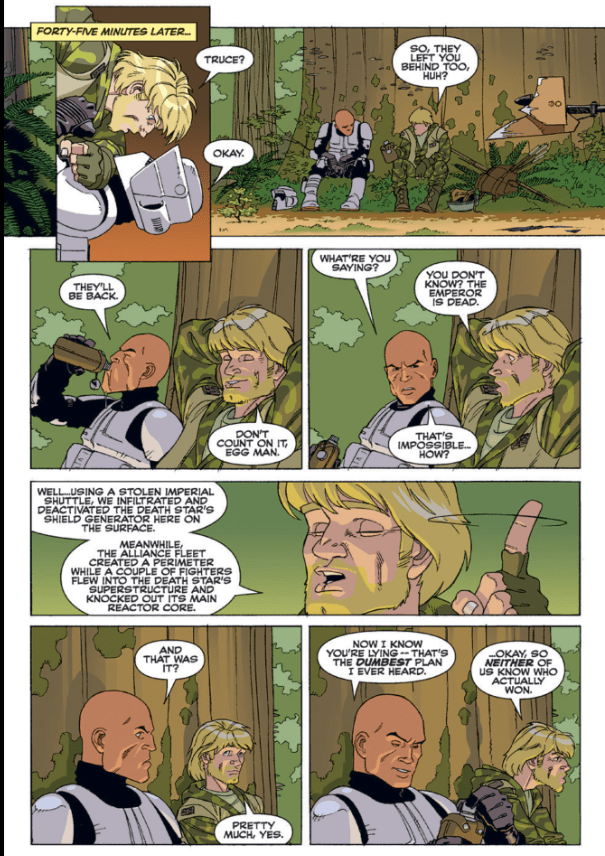 Showing that Marangon is capable of more than just comically-expressive faces, this story focuses on two soldiers, one Rebel, one Imperial, stranded on Endor years after the eponymous battle. Gradually overcoming their differences in order to work together to find a way off the planet, the end result is a “boots on the ground” perspective on the Rebel/Imperial conflict, showing that on the most basic level, the differences between the two are mostly cosmetic.