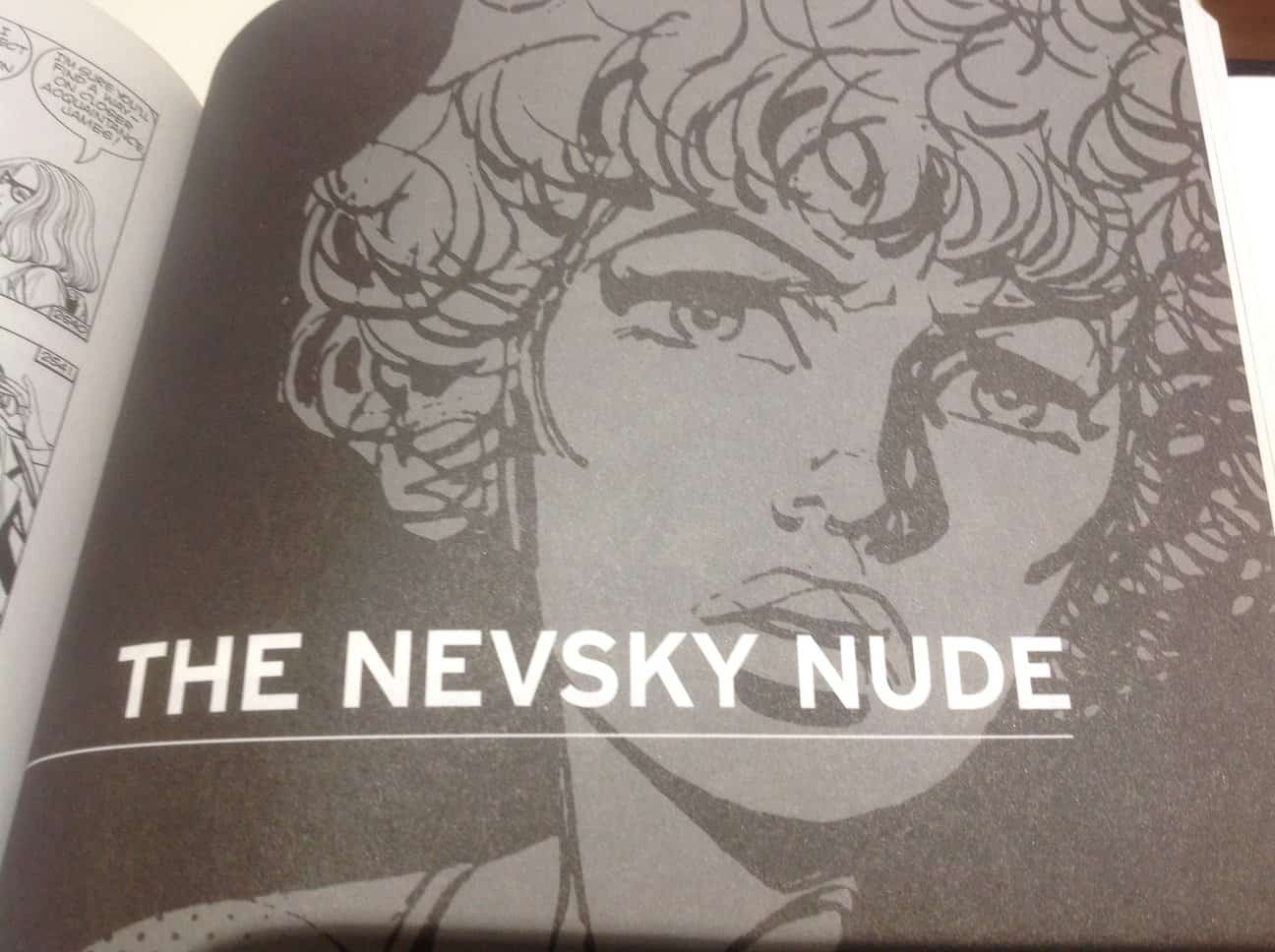 The Nevsky Nude features one of the rare stories in which Bond’s mission keeps him on British soil. 007, in communication with Moneypenny and M via radio, is shrouded in the Sussex forest in the deep of night, hoping to bust wide open a SMERSH plot known as Operation Nevsky. Their intelligence bears fruit, as a beautiful, scantily clad women parachutes from a plane passing above! Before Bond can get to her, he is viciously attacked by a SMERSH assassin, and in a mighty struggle involving all three desperate individuals, both the attacker and the woman are killed. With virtually no lead to work with, Bond and the despondent high ranking MI6 staffers are surprised to hear a bizarre radio transmission later that night, the voice announcing itself as none other than King Arthur and calling for Britain to show more resolve and backbone! Suddenly, sightings of ghosts in the vicinity arouse MI6’s curiosity. The selection of Sussex by both SMERSH and the folk behind the supposed ghost is far too great a coincidence for them to ignore. Thus commences another wild adventure for England’s greatest secret agent.

Writer Kim Lawrence makes a strange decision for the latest newspaper strip story by keeping James Bond set firmly on the home front. When prompted to describe what about the 007 brand that attracts its fans, they will be quick to add ‘globe trotting’ to the list of fantastic activities they would love to emulate. As such, having 007 spend an entire adventure in Britain seems counter-productive to expanding on the character’s mythos. From a visual standpoint, Yaroslav Horak is held back from letting his imagination go with exotic flavours, restricted to conveying the English countryside mostly. What the story lacks in foreign flare, Horak strives to make up for by letting loose with pronounced, sharp artwork when the protagonist engages in fisticuffs. The best example comes early on, when 007, a male SMERSH agent, and the mysterious woman adorned in nothing more than her lingerie do battle at night in the amongst the bushes. Horak really makes the most of an intense fight taking place predominantly in the dark save for the occasional ray of light emanating from a lantern being swung about during the ferocious contest. Shortly thereafter, 007 is involved in a brutal fight with another SMERSH agent in a rudimentary apartment room. The setting is uninspired, prompting Horak to put all the emphasis on the fight itself, and the viscera is brilliantly realized via excellent visual storytelling. 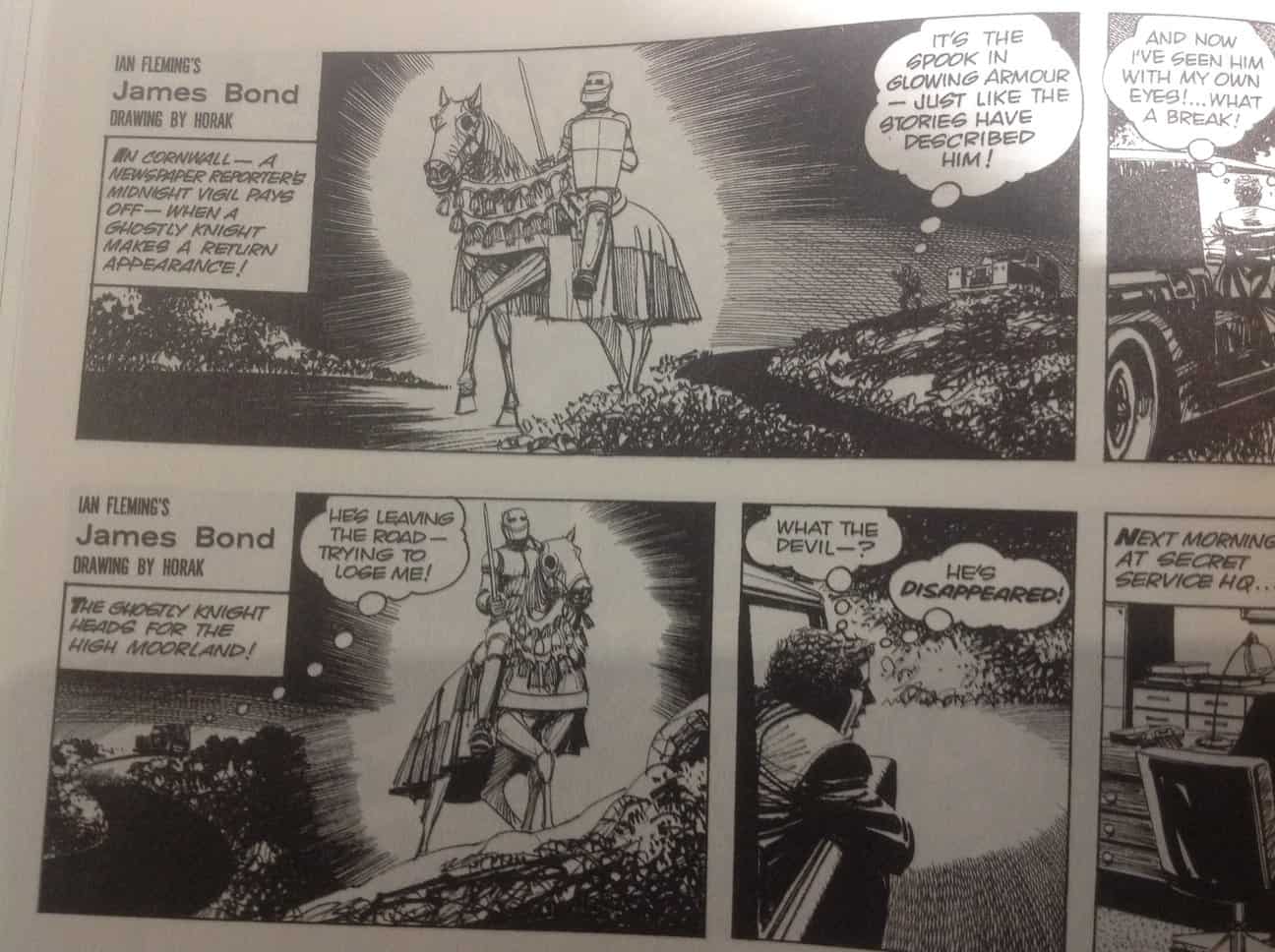 Lawrence gets away with the decision to keep Bond in Britain by explaining that MI6’s involvement in home security relates to a possible SMERSH reconnaissance mission within U.K. borders. The return of SMERSH is cause for excitement. It was, after all, the original enemy organization 007 battled regularly in the Ian Fleming novels. A contraction of two Russian words, Smiert Shpionem, meaning ‘Death to Spies’. It was an actual assassination division of the Soviet secret service that liquidated Soviet traitors as well as possible international enemy spy cells. Because the film producers wisely chose to remain as apolitical as possible given the sort of character they had on their hands, SMERSH is rarely mentioned in the films, the only two instances being From Russia With Love (very briefly) and The Living Daylights, but in the latter film SMERSH is ultimately not the main threat Bond must contend with.

While it is relatively obvious, therefore, that SMERSH is somehow behind the odd circumstances of the supposed King Arthur ghost, part of the fun to be had with The Nevsky Nude is joining Bond in his investigation. Apart from the two aforementioned tussles and a brief pistol-packed climax, the story is lacking in familiar Bondian action beats. In its place is a mystery thriller that sees the secret agent roam the English countryside, walk through cavernous compounds, and require the assistance of a young hippie, Swan, to help unravel the mystery. If the ordeal sounds a bit like what kids experience when they watch an episode of the Scooby-Doo cartoon, that’s because it does resemble it closely, only this version features more actual blood, death and sex. The eventual explanation as to what is happening is a bit on the far fetched side of the spectrum, not to mention that it fails to tie in very smoothly with the glowing King Arthur ghost present in the early goings, yet the ambition on the part of Lawrence and Horak is appreciated. ‘A’ for effort, if maybe only a ‘B’ for the execution on the whole. 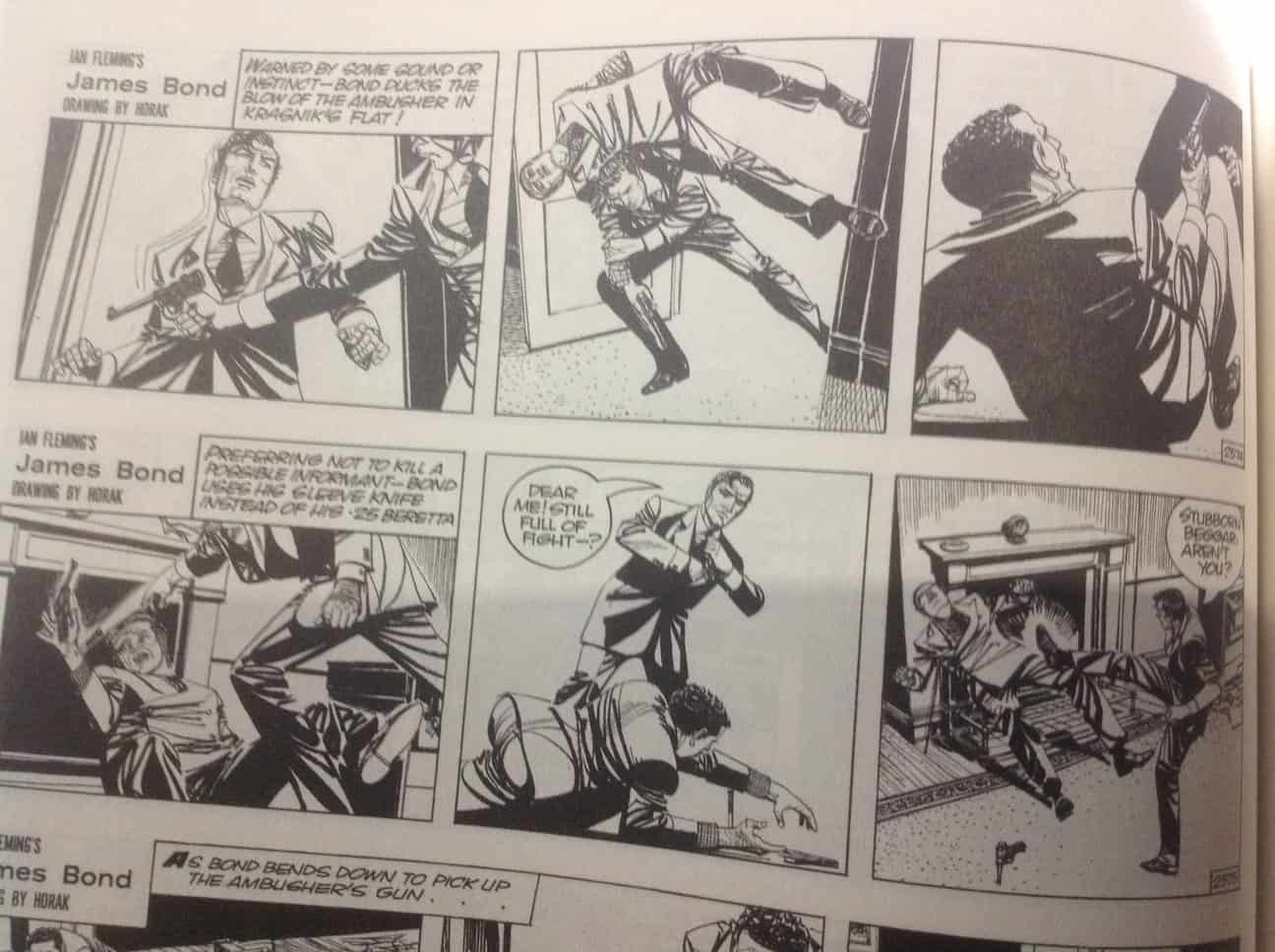 On the topic of the visuals and sexuality, the more of these classic Daily Express stories one reads, the more it becomes obvious that Lawrence and Horak try to shoehorn in the easiest 007 tropes they can, chief among them the assembly line of loosely dressed, gorgeous women. One need only recall the whip equipped vixen from Trouble Spot that got undressed to make her lashes more fluid and effective for a taste of the sort of sex appeal the creators are going for. In The Nevsky Nude, the opening sequence has a femme fatale, Ludmila, explain to her fellow jet-set passenger that, since even a tinypiece clothing lying about could be a clue for the British, it is best that she strip to the bare essentials. This sort of gratuitous female sexuality is commonplace for the Lawrence-Horak strips, certainly judging by the stories collected in Omnibus 004. Once in a while a light jab at the outdated sexual misogynist tendencies of the Bond stories is perfectly fine, yet Horak and Lawrence are indulgent when playing that card, suggesting that this is something they feel they have to commit to in order to make the adventures racy. While Horak knows how to draw a woman’s breasts as voluptuously as possible, the titillation effect wears off after so many nude dames.

The Nevsky Nude is an oddity in the James Bond cannon. Not only does the British spy remain in England for the duration of the action, but part of his mission entails shedding light on a mystery involving a long dead legendary figure who has apparently returned from the dead to haunt the countryside. While it gets too laborious for its own good down the stretch, trying to link hippie political sub-culture with foreign threat SMERSH, seeing Bond doing research and detective work as opposed to hopping from country to country whilst blowing things up makes for a change of pace. The Ghostbusters aren’t the only who that ain’t afraid of no ghosts.

James Bond will return in The Phoenix Project!