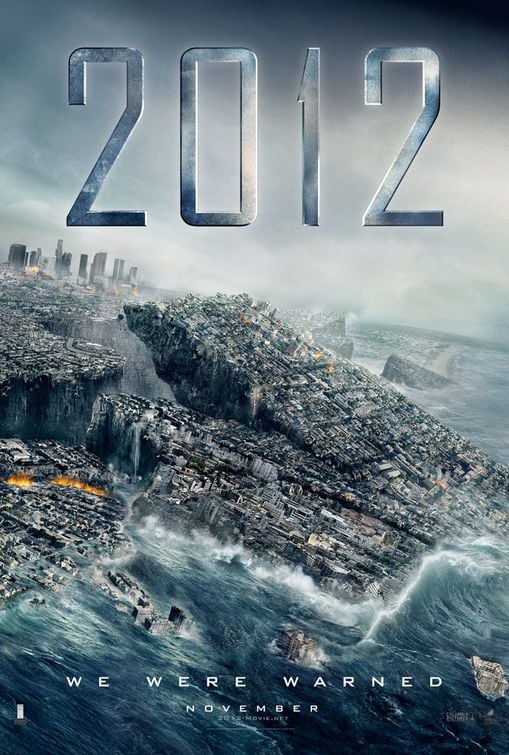 This review is SPOILER ridden so beware. Then again, if you’ve seen any disaster movie made since 1960 then nothing will be a surprise. Trust me.

Judd Apatow, Tina Fey, Ben Stiller, Will Ferrell and all the other maestros of contemporary comedy should be afraid, as there is a new clown in town: Roland Emmerich. In 2012, his new disaster-themed comedy, Emmerich expertly mines the infinitely dense caverns of Hollywood cliché to deliver an arresting treatise on all the most inane and stultifying ridiculous tropes of modern American cinema; a hilarious parody projected against the backdrop of a cataclysmic sequence of earthquakes and tsunamis; a parade of pandemonium supposedly culled from hopelessly inaccurate conspiracy theories orbiting the laughable supposition that the Mayan calendar foretold the Earth’s Armageddon in ancient Mesoamerica.  Played straight by its eclectic cast – in fact, one suspects that some viewers may miss the blistering satire altogether – 2012 is the funniest film to emerge from the dream factory over the past twelve months. The film’s cast of characters rapidly reveal themselves to be players in a carnival of moribund and lazily written stereotypes, most likely rejected from the last merchandise-themed, fast food-bracketed, multi-media synergized cinematic abortion. Divorced, struggling writer suffering through a fractious relationship with his younger son, one that may be overcome by implausible action heroics? Check (John Cusack). Noble, straight-talking  scientist serving a dual purpose as a talking head plot expositor and the voice of humanistic reason during Act three’s shenanigans? Check (Chiwetel Ejiofor). African American president with noble aspirations to honorably meet his fate amongst his people? Check (Danny Glover). Vaguely kooky professor-type who solemnly intones that all our vaunted technologies are useless in the face of the infinite power of nature? Check (John Billingsley).  Presidential daughter serving as a love interest, with an ethnic background that conveniently matches her suitor, apparently because a post destruction world still prohibits mixed race relationships? Check (Thandie Newton). Supercilious, villainous politician who usurps a power vacuum and voices metaphors of cold, hard realism and sacrifice ? Check (Oliver Platt). Eccentric hillbilly conspiracy theorist whose insane ramblings turn out to be shockingly accurate? Check (Woody Harrelson). Slightly nerdy and therefore acceptably dislikeable boyfriend of our hero’s ex-wife (Amanda Peet), conveniently dispatched for the sole purpose of stabilizing the nuclear family by the final act? Check (Thomas McCarthy).

The film’s obvious precedents are the Irwin Allen pictures of the seventies, with The Towering Inferno and The Poseidon Adventure serving as the chief cinematic corpses for 2012 to plunder. However in our era of globalization, the pantomime is broadened beyond American characters to include a crass Russian oligarch and meek Indian scientist – additions, one assumes, intended to ensure some sense of cultural identification by the punters snapping up poor quality phone-cams of the film hawked on the streets of Leningrad and New Delhi.

Amidst the admittedly grandiose, CGI-rendered carnage, banal scenes of alleged character development recall the ghetto of daytime TV disaster-of-the-week specials. Scenes of incidental characters  – who have barely been introduced – making ridiculous final calls to their loved ones do nothing but elicit laughter. It is reassuring to see that the world’s communications infrastructure is resilient enough that people’s mobiles and landlines work perfectly fine after cataclysmic, extinction level global tsunamis and earthquakes that realign the earths magnetic core. Emmerich masterfully employs every cliché imaginable, a glorious pastiche that revels in its bromide platitudes. Included among the most predictable moments is a scene in which a main character disappears down a fiery crevice, only to tentatively pull himself up after his son balefully screams ‘noooooo’, the film’s score majestically swirling to impressively vapid heights. This joke is rendered doubly effective at the film’s conclusion, where the same hero makes a miraculous re-appearance after a underwater mission to dislodge an unfortunately placed power drill sabotaging the hydraulics of a titanic ‘ark’ that has been constructed in record 18 months by the wily Chinese. What is the Chinese for ‘fail safe’ or ‘back-up systems’?

The dialogue is hysterical throughout, but the funniest line  is ‘Are you suggesting that the director of the Louvre is a threat to humanity?,’ a quip that I’m sure will have Dorothy Parker and I.A.L. Diamond turning green with envy. Emmerich’s masterstroke, his piece du resistance, is the saving of a disagreeable tiny dog, a scene that reflects the first rule of Hollywood screen writing – you never kill animals or children. Even within the context of 99% of the human race’s annihilation, you have to ensure that the audience understands that the cute widdle doggywog is OK. Awww….

2012 is wonderfully reminiscent of the Zucker brothers at their best, in either the Airplane! or Naked Gun film series. One must congratulate Emmerich on the  new strand of comedy he has unwittingly unearthed, and its potential mileage. Perhaps 2012 could initiate a franchise far superior to the baleful Epic Movie series of recent years.  The next film, for example, could focus on a hard-bitten, hard-drinking divorced cop whose African/Korean/Iraqi (edit as applicable) partner is mere days away from retirement. Although he uses unorthodox methods to get results and annoys the suits down at City Hall, all bets are off when his angelic daughter is kidnapped by a super intelligent, evil yet bewitchingly charismatic serial killer / terrorist czar / alien mastermind (adjust as needed) leading to a exciting, adrenaline-fueled climax at the docks which culminates with a quip-punctuated sequence of explosions. 2012 is epic in its length (158 hysterical minutes), epic in its crass stupidity, epic in its embrace of the very worse of formulaic, insulting storytelling techniques. But despite its unintentional moments of constant hilarity, it is thankfully not the end of the world.