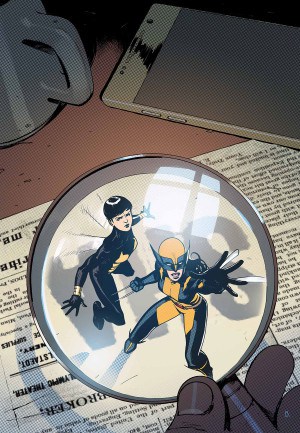 The Wolverine world tour continues as Laura and the gang enlist the help of the winsome Wasp to rid Zelda of the nanites killing her from the inside.

When the rotation of major cameos started last month with the trip to visit Doctor Strange, I was hesitant to embrace the idea because these kind of things can really kill a book’s momentum, but Tom Taylor demonstrated made Strange work for Laura using him as a vehicle to propel her momentum rather than take up space of his own. Taylor’s cut his teeth on big casts of iconic characters on the likes of titles like Injustice, which I’m guessing is where he honed his ability to come up with smooth shorthands that don’t jockey for position with the story being told. Strange was there to maybe boost numbers off the back of Jason Aaron and Chris Bachalo’s flagship title, but Taylor put him to work as a vehicle to illuminate how Laura thinks and start to really tease out the ways that she differs from Logan.

This time around my personal prejudices pulled me in the other direction because I haven’t read Janet Van Dyne in a comic since she died at the climax of Secret Invasion, so I was bursting to see her, but again, Janet’s here for Laura to play off. Keeping up the breathless momentum of the arc so far, the action picks up with the girls teleporting into Pym laboratories to steal an Ant Man suit so Laura can shrink down and fight the nano machines in Zelda’s body, surprising Jan. She takes immediate control of the situation by calling and yelling at Strange for not warning her in a hilarious sequence that quickly establishes Taylor’s direction for her in one of the snappy interactions that exemplify his work. Seeing a smooth, assertive Jan who can take control of any situation is incredibly refreshing.

As Jan shrinks down alongside Laura to guide her in their microscopic battle, she again becomes a vehicle to chart the course for Laura’s characterization by drawing important distinctions between her and Logan. Last issue, Laura quipped that it’s only a bunch of guys on the Internet that don’t accept her as the new Wolverine, but Taylor is smartly engaging with the preconceptions that come along with the wholehearted embrace of her in the Wolverine role. While it’s been a refreshing change that Laura has never been told she has to prove or justify herself as the heir to the throne, it means a lot that there’s a deeper engagement with the ramifications of that embrace. Between Strange and Wasp, the expectation of Laura is that she would be, well, a clone of Logan mirroring his psychology.

Strange finds himself surprised at Laura’s restraint and her ability to process the trauma she’s endured without lashing out and Jan is taken aback at how Laura studies a situation analytically before throwing herself into the fray. Thanks to the careful characterization in the first couple issues, it’s already plain to the reader that these are traits that Laura has had to consciously and painfully hone, but the restraint and cool analytical mind that they see in her call to mind the flashback to her days with Logan in X-Force in the debut issue that established these traits as being key to her development.

The dynamic that is beginning to emerge between Laura and Logan is amusingly familiar, particularly in how Jan separates them between Logan’s propensity to leap into a fight without looking and Laura’s more cautious, strategic mind. Kieron Gillen’s Marvel debut came with a speech delivered by Ares explaining to his recruits that there are two gods of war; him and his sister Athena. He derisively describes things like the Geneva Convention as being her sort of thing while he is pretty simply a berzerker. It’s a dynamic that informs most every pop construction of the pair of deities from Wonder Woman to Xena, so it’s particularly fun to see Logan and Laura stepping into the archetypes. There’s even a lot to be said for the parallels between the Laura we see in this series and Xena, who sought to reconsider her engagement with violence and murder after having served as Ares’ general much like the indiscriminate killing that Laura participated in during her time with Logan in X-Force, but conscious or not, Taylor appears to be setting them up as Athena and Ares, which I’m absolutely here for.

After the largely madcap adventures of last issue with giant monsters and winking furniture, this issue returns to much darker territory as Laura fails to save Zelda when Mooney catches up to them and she fails to save the clone despite her and Jan’s best efforts. These are harsh lessons that Laura is learning as she attempts to step up as a leader for the first time, but Zelda’s death lands hard because it has meaning and respect behind it. While All New Wolverine is, on the whole, a far darker book, the struggles that Laura faces and the powerful way that they’re depicted recall John Rogers and Keith Giffen’s seminal work on Blue Beetle, particularly the issue where Jaime has to grapple with his inability to save everyone in attempting to deal with a hurricane.

Where Navarrot and Lopez shine brightest this issue is in body language, selling the delicate nuance necessary to sell Taylor’s intended character beats. Their Jan is a sight to behold, more sass than scold as she upbraids Strange over the phone and they give her a commanding physical presence, even from perspectives that look down on her from above. There’s a power to Jan evident in their depiction of her that runs counter to the idea of woman whose powerful is literally to shrink herself. Key to her powerful presence is her figure and how carefully it’s rendered. Jan sure is is a woman in a skin tight black outfit in a superhero comic, but they build up the winsome aspect of her through careful inking of her musculature and intelligent posing that evades crass titillation. Jan is drop dead gorgeous, but presented in a way that skews much closer to Kris Anka’s Carol Danvers or Chad Hardin’s Power Girl than the more typical wasp waisted abstraction that proliferates in superhero art.

There’s several books, particularly at Marvel, that can give All New Wolverine a run for its money when it comes to delivering fun and engaging humor, and there’s several books under the Batman group at DC that are exploring the toughest realities in a humane and nuanced way, but there aren’t any better at integrating both qualities into a single book. All New Wolverine is the pound for pound best superhero comic on the stands today.