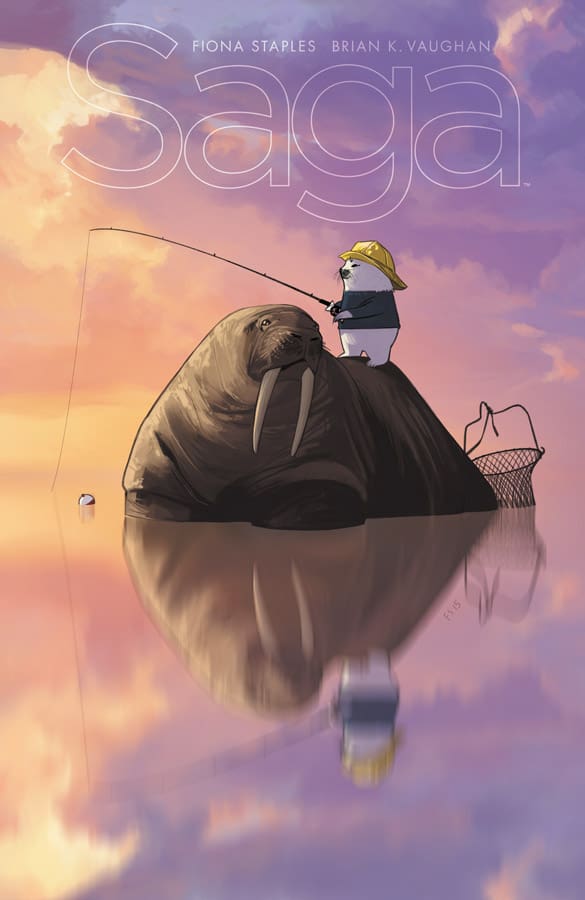 After years of separation, Alana and Marko have a chance to reunite with Hazel. Unfortunately, The Will is not far behind, having forced Upsher and Doff to help him on his quest for revenge. Meanwhile, Hazel’s mixed identity has been revealed to both Petrichor and Noreen. Will they expose her or keep it secret? Things are revving up in Saga, and all signs point to the prison break of the century.

The colors are…well, look at it! The sunset is breathtaking. Another nice detail is the way Ghus and Friendo’s reflections are distorted in the water. The scenery looks so realistic that one can feel they’re actually there. Speaking of Ghus and Friendo, the two of them in the middle of the sea is tranquil, much like the cover of #33. It’s excellently composed and has a calming effect. Even in this war-torn galaxy, there are moments of peace and love. It’s a nice pause before the inevitable chaos.

Obviously, it’s amazing. Staples’ colors are gorgeous, her character designs fantastic, and the sequential flow of her panels effortless. Notable in this issue are the settings. Each has a unique look and mood. The Landfallian prison Hazel lives in is gray-colored, industrial, and claustrophobic. The deserted planet Ghus, Robot IV, and his son, Squire, inhabit has a beautiful ocean and fields of lush grass, but is mostly empty space. The ice planet that Upsher, Doff, and The Will find themselves on is a vast, frozen wasteland where only the deadliest creatures survive. Staples’ ability to capture the mood of a landscape amplifies its beauty.

Fonografiks continues to use lettering with both lowercase and uppercase letters. He also experiments with the font and coloring for different species. The TV-headed aliens have blocky lettering while the mermen have green letters inside squiggly dialogue balloons. It gives the impression that they have unique accents and allows the reader to imagine them. Fonografiks also does some interesting composition that adds to aforementioned emotions. Two that stand out are a run-on sentence that expresses how nervous Hazel is, and a repeated, meshed together sentence expressing Upsher’s fear. It’s great experimentation, and there should be more in future issues.

Brian K. Vaughan’s writing continues to shine. Characters have snappy dialogue and unique, complex personalities. He makes the world of Saga feel both fantastic and familiar at the same time. Vaughan gives significant screen time to each story line, and the transitions between them are smooth. The cherry on top is how the story lines are starting to intersect together. No doubt, they will lead to an epic conclusion.

The highlight of this issue is Hazel’s story and the continued theme of bigotry. The issue opens with Petrichor walking around the prison and being stared at suspiciously by other prisoners. Petrichor is disliked because she is a trans woman yet she maintains her confidence. Hazel’s narration talks about how the term “alien” has traditionally negative connotations. This illustrates why the prisoners are hostile toward Petrichor. She is different, so they assume she is dangerous. Bigotry has long been a theme in Saga, and it’s expanding beyond the “Wings vs. Horns” conflict into real life forms.

When Petrichor discovers Hazel’s secret, she helps her conceal it. This might seem as though Petrichor accepts Hazel’s identity, but only because she assumes the child is a result of sexual assault. In Petrichor’s mind, there is no way a Landfallian and Wreath would consensually conceive a child. She doesn’t respect Hazel’s identity so much as pities it, which is condescending and bigoted. It’s infuriating Petrichor would do this to Hazel, but that’s the tricky thing about bigotry: people can be bigoted without knowing it. Hazel herself is bigoted when she misgenders Petrichor by calling her “Mister.” This is a mistake that Hazel quickly corrects, but still shows how bigotry can be ingrained subconsciously and enough to keep people divided.

There is hope though. In one scene, Klara and Lexis are reading the subversive novel A Night Time Smoke, the same novel that inspired Marko and Alana to fall in love. It’s clear from the laughing that their audience loves it. Petrichor suspects the pair are trying to unite the prisoners for a rebellion. Also, Noreen, despite receiving a head injury after Hazel’s reveal, agrees to keep her star student’s identity a secret and help the girl escape. In this case, both great art and love is breaking down walls and uniting different people for a common cause. It leaves one feeling all will be well. However, given this is a Brian Vaughan story, it’ll all come crashing down. I know, I’m a total killjoy.

Saga #34 is a solid issue with great art, strong storytelling, and serious themes for intellectual discussion. It’s a turning point in this story arc and pinpoints to epic events on the horizon. Strongly recommended for fans, newbies, and lovers of good stories in general.