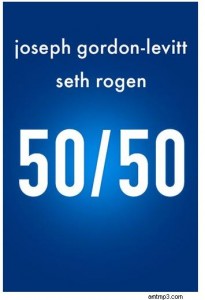 Written by Will Reiser

Will Seth Rogen ever grow up? His contribution to Jonathan Levine’s comedy drama 50/50 is peppered with expletives and those trademark looks of disbelief at the failure of women to fall at his grubby sneakered feet. But it’s Joseph Gordon-Levitt who is the star of this film. Rogen’s role is to turn 50/50 into a funny and affecting hybrid of the cancer movie and the slacker dating comedy. It shouldn’t work but it does.

In Seattle, 20-something radio journalist Adam (Joseph Gordon-Levitt) is drifting along in a (largely) sex-free relationship with gorgeous but selfish artist Rachael (Bryce Dallas Howard). When his

nagging back pain turns out to be a rare and invasive cancer, Adam initially relies on Rachael and best mate Kyle (Rogen) for support and chauffeuring services. But he’s less comfortable when trainee counsellor Katie (Anna Kendrick) probes him about his feelings and his distant relationship with his worried mom (Anjelica Huston).

You know what you’re going to get with a cancer movie – scenes of head-shaving, violent puking and the grinding tedium of the chemo room. I’d be lying if said that Will Reiser’s script doesn’t include all of these elements and more. But the success of this movie lies in not simply using the trajectory of an illness as an excuse for excessive amounts of navel-gazing and sentimentality.

Reiser based 50/50 on his own battle with cancer and real-life friendship with Rogen, and there’s an ease about the way the dialogue flows that comes from lived experience. Gordon-Levitt and Rogen are a good fit as the chalk ‘n’ cheese pals whose characters are established within the first five minutes of the movie. Adam is the neat freak who is conscientious about his work and his health, but finds it difficult to confront issues in his love life. Kyle’s role is to drive him everywhere (Adam has no license) and point out his worrying tendency to date “needy bitches” who withhold sex. A forthright exchange in a coffee shop about blow jobs (or the lack of them) sums up their relationship well. 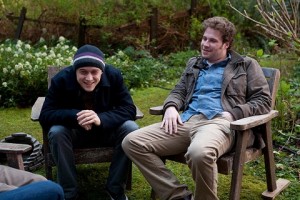 If you’re thinking that Gordon-Levitt is just there to be a foil for Rogen’s unrestrained antics, you’re wrong. He is a highly intelligent actor with a wonderfully deadpan delivery, as anyone who saw Brick can testify. The pre-cancer Adam does come across as a bit of a wimp, but his illness has the effect of reinvigorating him, while simultaneously sapping his energy. “I recycle” he protests, on learning he has a very long and unpronounceable tumour eating away at his spine. (“The more syllables, the worse it is.”) But he doesn’t require any dialogue to convey the depth of his distaste at Kyle’s unhygienic (ball) clippers or Katie’s mobile rubbish tip of a car.

As a buddy movie, 50/50 delivers the goods, with a full quota of embarrassing pick-up scenes, botched dates and some great one-liners. On the serious side, it often manages to head off schmaltz by keeping the scenes short – as when Adam finally tells his mother the bad news, or when he’s saying his goodbyes before a major operation. But with too many montages and an excess of generic indie pop, the hospital scenes sometimes feel like they’ve been extracted from an episode of Grey’s Anatomy.

The most predictable aspect of 50/50 is the relationship between Adam and Kendrick’s improbably youthful doctor (in fact she’s not yet qualified). 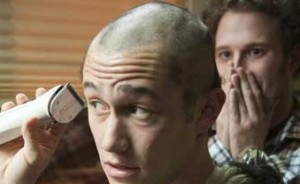 Maybe I’ve seen too many romantic comedies, but it seems blindingly obvious that she’s the perfect antidote to the superficial and manipulative Rachael. Their scenes obviously don’t have the spark of the Adam/Kyle “bromance”, but Kendrick’s tentative efforts make Adam get in touch with his feelings are funny and well-written.

Anjelica Huston pitches her performance well as a woman burdened with a largely absent husband (he has Alzheimer’s) and a son who keeps her at arm’s length. But it was while watching 80-year-old Philip Baker Hall as a cancer patient gleefully consuming macaroons laced with dope that I saw a long and bright career ahead for Seth Rogen.