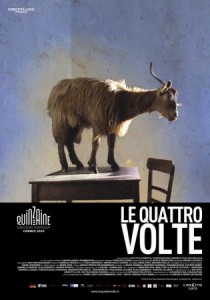 “Some viewers will be bored and others entranced, but in either case La Quattro Volte seems destined to provoke discussion…”

Under its Cinema Europa programme strand, the London Film Festival strives to screen the best of the world’s contemporary European cinema, an experience that can either swing from a refreshing change to routine forms of storytelling or a frustrating and pretentious ninety minutes in the dark. The Italians have a particularly strong suite of films at this years festival and La Quattro Volte, from director by Michelangelo Frammartino, is sure to garner attention and frustration in equal measure, as it did from its Cannes debut earlier in the year. In a pastoral Calabrian village, an elderly herdsman is seen shepherding and tending to his flock in a repeated cycle that he must have conducted for many years. As his frugal existence meets its preordained conclusion, the narrative focus shifts to a different lead, to the animals and scenery who occupy this vista, as the people of the village meld into the background and alternate articles of interest come forward. A calf is born and takes its first faltering steps, an ancient tree collapses and its corpse is ravaged for fuel, in one extraordinary single take a sheepdog wrecks unfortunate destruction – what can it all mean? 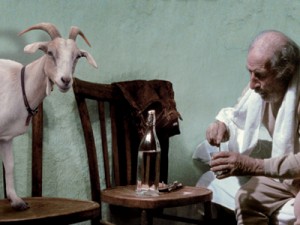 cinema on the world stage, a type of cinema exemplified by the likes of Bruno Dumont, Bela Tarr or Carlos Reygadas, a strand of film-making where the emphasis is not on the conventions of dialogue or characterization – or in some cases even a cursory interest in plot. These traditional facets are all being sacrificed on the altar of atmosphere, as very long takes of beautiful landscapes and evocatively lit interiors dominate run-times. La Quattro Volte certainly falls into this latter category, as the film has perhaps a half dozen words of dialogue which are not subtitled, and once the emphasis changes from the herdsman there are no characters at all to speak of, although in a curious way a 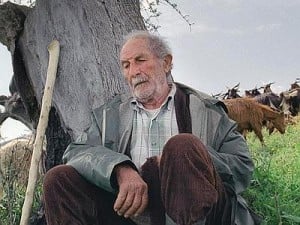 process of anthropomorphism takes hold in the viewer as the animals and eventually minerals seem to take on an animated life of their own. It may sound trite, but the cycle of life is here in this visual tone poem, a film certainly not for everyone that evokes a sense of Kiarostami or Bresson’s Au Hasard Balthazar in its unusual format and structure. Some viewers will be bored and others entranced, but in either case La Quattro Volte seems destined to provoke discussion.