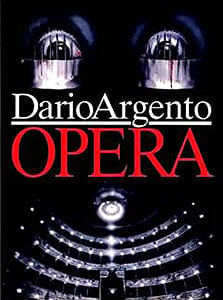 “Opera showcases Argento at his insane stylistic best that rivals the Technicolor mastery of Suspiria.”

You know a Dario Argento film when you see one – vivid and hypnotic colours, elaborate camera moves and sets, beautifully graphic violence, and horror on a grandiose scale. A Dario Argento film has a specific stylized stamp that’s practically a brand of Italian cinema in and of itself. A master of the giallo with such films as Four Flies on Grey Velvet, Deep Red, and Suspiria, Argento

would tackle Opera, his most difficult and wildly elaborate and epic giallo, as not only a tribute to the curse of Macbeth but to the grandious scale and class of the opera itself.

Betty (Christina Marsillach), a young opera singer, is offered a starring role in a production of Verdi’s Macbeth after the main actress is injured in a car accident. Familiar with the curse associated with the play, Betty, under the pressure of her agent (Daria Nicolodi), accepts the role and goes onto rave reviews. But it isn’t long before she is terrorized by a masked fan who tapes needles under her eyes and forces her to watch her friends and co-workers get killed in increasingly grisly fashion. It’s now a race to find out who the real killer is, and what connection he has to her dreams, before the final curtain falls on Betty’s life.

Opera showcases Argento at his insane stylistic best that rivals the Technicolor mastery of Suspiria. With extremely elegant sets, Ronnie Taylor’s well-constructed scope cinematography, and murder-set-pieces shot and choreographed so beautifully that watching the blood flow is in itself a work of art, Opera is exactly what it appears to be – an operatic horror film achievement. Dealing with the curse of Macbeth, the production itself went through many mishaps, including the death of an actor and the loss of almost half of the crows that were set free in the opera house, but it did not cease Dario Argento from crafting a richly complex and visually stunning giallo.

Being an Argento film where the style is forefront you do have to forgive some of the flaws in the storytelling, and Opera is no exception. The ending may feel tacked on, or unnecessary, but Opera is so grand in scope that the sheer ride it takes you on is all worth it. Opera is one of the last great Dario Argento films that truly incapsulates the mind of a genius of cinema and visual storytelling. A filmmaker who knows how to use light, camera angle, position, and movement to make every frame a sinister work of art, Opera showcases Argento’s flair for the over the top. Stunning, beautiful, ultra-violent, and larger than life, make sure to reserve a date and spend a night at the opera.