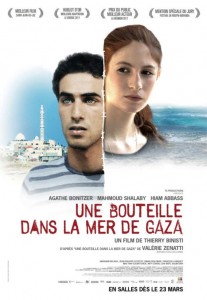 A Bottle in the Gaza Sea

Friends who want to stay friends don’t discuss religion or politics. Contentious and divisive, discussions about these hot topic issues tend to lead to fiery debates, with interlockers entrenched in their predisposed ideologies. Verbal disputes that stem from these discussions tend to take focus away from, and overshadow, the genuine friendship underneath, and no case is more exemplary than in A Bottle in the Gaza Sea.

In Israel, a French expatriate, named Tal (Agathe Bonitzer), is irreversibly changed when she experiences a terrorist attack at her local café. In search of peace and understanding, she places a message of good will into an empty bottle, and has her brother, an Israeli soldier, throw it into the Gaza Sea.

NaÏm (Mahmud Shalaby), a teenager living in Palestine, receives the message, and when he contacts the email enclosed in the letter, he and Tal strike up an unlikely virtual correspondence. As a friendship begins to burgeon, it becomes strained by the tensioning political climate around them. On the one hand, the film is a heartfelt coming-of-age story, connecting two people from two different places that, although right next to each other, couldn’t be farther apart. It’s like a live-action, modern retelling of Mary and Max. Although they meet by happenstance, the relationship blossoms in a way that feels organic and genuine.

Their respective family lives are also quite intriguing, shedding light on their backgrounds. As we get a sense of incertitude and discontent in their home situations, their virtual connection becomes stronger and more relevant. As a slice of life film about two different provisions, the film is incredibly touching and meditative. But on the other hand, there’s the rest of the film, which feels largely inauthentic.

The relationship between Tal and NaÏm is clearly an analogy of Palestine and Israel, and their efforts to rationalize differences and forget the past is supposed to mirror the dialectical struggle of the crisis in the Middle East. Far from being a subtle rumination about the issues, the film is incredibly heavy-handed in its approach.

The film does not trust the audience to discern the analogy for themselves, but presents the issue in a conspicuous manner. As a result, the film can feel incredibly sententious and instructional; a trait made even more frustrating when considering how the film posits more questions than it answers. Like the teenagers, the film is highly critical, but it never comes to any soluble conclusion.

In fact, as censorious as it is towards the conflict in the Middle East, the film itself is never overtly anti-war, which makes the moral of the narrative bemusing. Think of how Tal’s brother, who helped her send the letter of peace and understanding, is so damning and judgmental towards NaÏm and his people. Also, the suspension of disbelief is routinely challenged. From the start, the ability to buy into the story is predicated on the readiness to accept NaÏm and Tal’s chance encounter. But even if you buy into the unlikely scenario, there are a number of other sequences that will forestall the realism. For instance, NaÏm is able to learn French at an unreasonably fast rate, becoming fluent almost instantaneously. Like the Oscar-winning Crash, this makes the film feel fictitious and exaggerated, which is a tone not suitable for a picture with a subject matter rooted in reality, and of such significance. Also, some occasionally weak acting, especially on the part of Bonitzer (who delivers Kristen Stewart caliber acting), occasionally hinders the authenticity of the relationship.

But even so, the film works fairly well when it is devoid of its politics, but because it often pervades into the story, it succeeds and fails in equal measure – making A Bottle in the Gaza Sea a half full, half empty experience.