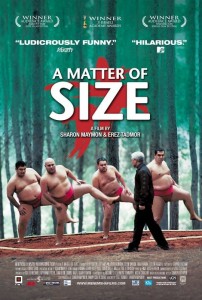 A Matter of Size

This is the sort of film that will fool you. At first glace, it presents itself as an unlikely fish-out-of-water comedy: an overweight Israeli dishwasher, fed up with dieting, convinces his Japanese boss to help him start a Sumo club. You might be forgiven if you expect this film to devolve into a trite message about ‘just being yourself,’ but you’d also thankfully be wrong. This film is cleverer than that, and to its credit, takes a far more honest approach to being overweight than most comedies dare.

Despite the fact that A Matter of Size is a comedy with a primarily overweight cast, it avoids (for the most part) the pratfalls and hijinks typical otherwise typical to large actors. There are no dinnertime fart scenes in this film. Rather, the comedy is character-driven. Aharon’s (Dvir Benedek) self-consciousness drives him to paranoia respecting his wife, his diet-coke, and his ill-fitting pants. Mona’s (Levana Finkelstein) attempts to control her son’s backfire and reveal her own anxiety about gaining weight. Herzl (Itzik Cohen) and Zehava’s (Irit Kaplan) first attempt at sex results in an on-going battle over the light switch. As a result, the humour in this film is refreshingly genuine.

When A Matter of Size does try out slapstick bits that would be more at home in an Eddie Murphy fat suit disaster, they come across as unfunny by design. We can’t laugh at a fat man in a broken chair, because no one on screen will either.

This is a film about self-directed dishonesty as much as it is about self-acceptance. It takes an adult approach to bodies, and understands that learning to be happy in an overweight body isn’t such a simple proposition. If it were, this film won’t be half as good.