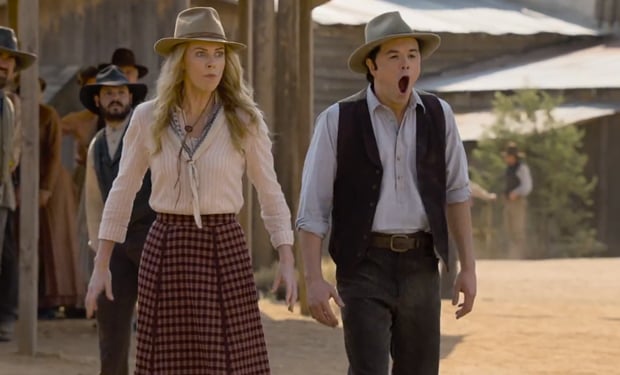 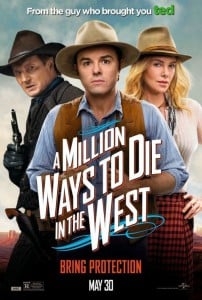 A Million Ways to Die in the West

In his seemingly never-ending quest to provide meaty satire and goofing on many things in real life, Seth MacFarlane knows no bounds. With his mega-popular Family Guy and 2012’s Ted, he certainly knows how to generate laughs. His latest film, in which he wrote, directed, and starred, A Million Ways to Die in the West, is no different. The film continues his farcical tradition and manages to squeeze as much humor, adventure, and romance out of its 116-minute runtime. With an all-star cast and an even more hilarious array of cameos, West may not be an Oscar contender but it’s definitely worthy of a viewing if you’re in the mood for a good chuckle.

Taking place in Arizona circa 1882, West focuses on Albert Stark (MacFarlane), a cynical sheepherder who is very out of place. He is petrified of getting killed at any moment in the extremely dangerous Wild West. To make matters worse, his beautiful girlfriend (Amanda Seyfried) has just dumped him. With his confidence at an all-time low, he eventually decides to win her back by dueling her new boyfriend (Neil Patrick Harris). To complicate things even further, a group of bandits, led by a deliciously evil Liam Neeson, ride into town and start causing trouble. Albert gets way in over his head when he soon starts developing feelings for the bandit leader’s wife (Charlize Theron). 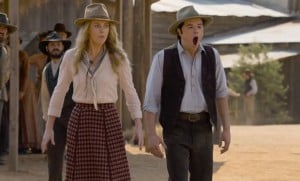 With a busy plot and a who’s who of a cast, West is the very definition of a guilty pleasure. The jokes are ridiculous, the performances, over-the-top. Even the music is overbearing and absurd, not to mention the very silly dream sequences and musical numbers. With West, MacFarlane has ventured into a genre that we haven’t really seen in recent times. The Western is full of satiric opportunity and MacFarlane has taken advantage of that.

The writing is decent, with joke after joke fired in almost rapid succession. There are some dead spots with the plot and not all of the jokes hit their mark but that’s okay; the pros definitely outweigh the cons in West. The cast is by far the film’s best feature. MacFarlane leads the cast and does well in a live-action role. His romance with Theron is really sweet and natural, one of the more serious and believable aspects of the film. Neeson is terrific in a villainous role. Giovanni Ribisi and Sarah Silverman are very amusing as a timid gentleman and a prostitute couple who think they should marry before having sex. NPH is also pretty funny in a sleazy role he seems to be echoing from How I Met Your Mother, only this time set in the Wild West with a gentleman’s moustache. 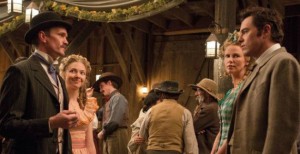 West is a film where you know exactly what you’re getting the second you begin watching it. MacFarlane has made a film here that has definite replay value, with fun performances and the occasional gross-out gag. Ted is a little bit better than thi,s but West still holds its own. MacFarlane is probably the strongest current source of comedy; if he continues to make movies like West, then we are in very capable hands.