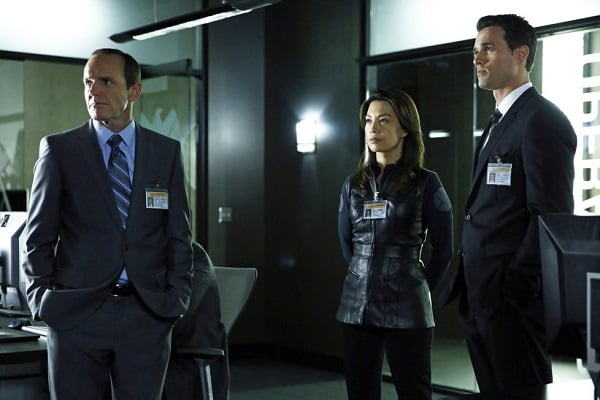 In “The Hub”, Agent Coulson and the team meet their first long-term adversary, and this character is far more dangerous than anything they have faced because technically, they are all on the same side. Saffron Burrows joins the cast as Victoria Hand, a S.H.I.E.L.D. bureaucrat who lives by the motto, “Trust the system.” She taps Coulson’s team, specifically Grant and Fitz, for a mission to sneak into a separatist’s base and disarm a weapon. As Coulson reassures everyone to trust her and S.H.I.E.L.D., however, she is keeping a big secret about Grant and Fitz’s mission.

“The Hub” continues the difficult balancing act of setting up two major story arcs for season 1 and probably season 2 while still keeping the audience engaged and unfortunately, the show is still not managing both goals at the same time. For every scene of Coulson and Victoria going head to head, there is a scene of slapstick nonsense with Skye and Simmons trying to break into S.H.I.E.L.D.’s classified files. Grant and Fitz’s secret agent adventures were also similarly hit-or-miss, mostly because the writers don’t seem sure of Fitz and his capacity for common sense. He sabotages the electricity so he can play hero to a bar full of soccer fans, but in the next scene, he doesn’t grasp that his prosciutto sandwich will attract guard dogs.

Many will be mostly willing to forgive the episode’s faults, however, because of the potential going forward. Victoria Hand is the perfect character to introduce into the show right now. Coulson is already suspicious about S.H.I.E.L.D.’s story that he died for five minutes and then he was resurrected somehow. A number of characters including Nick Fury have commented that his near-death experience has changed him and he is caring more about his team than S.H.I.E.L.D.’s greater goals. Now is the time to bring in a colder character who works by the book and expects the same from everyone else, even if her decisions mean a greater loss of life. Saffron Burrows is a great casting choice for Victoria, with her beautiful yet sharp features and a voice that would read a death sentence and her lunch order in the exact same intonation.

Like last week’s episode “FZZT”, “The Hub” is another big step forward in the show as far as build up and set up, but if the show wants to keep its audience, some of that set up will need to start paying off soon.

On a last note, I recommend checking out Saffron Burrows’ guest star run as Lorraine Weller on Boston Legal. She plays a lawyer who out-thinks Alan Shore in the courtroom and then seduces him with her long, sexy neck. She is pretty great, and I think it will give people unfamiliar with Burrow an idea of what she could do with Victoria.