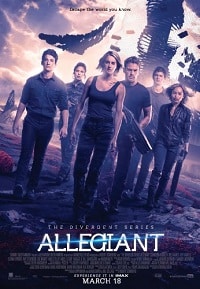 Like that uninvited party guest who just can’t take a hint, The Divergent Series returns with its stale appetizer of lackluster sci-fi adventure. The latest installment, The Divergent Series: Allegiant, continues the franchise’s inexorable march into mind-numbing mediocrity. Director Robert Schwentke dials up the action and plot twists this time around, which gives Allegiant a distinct advantage over the cinematic flat-lines that were Divergent and Insurgent. Sadly, the added action only makes things goofier, and no amount of plot twists can elevate this material beyond a glorified soap opera.

Allegiant picks up right where Insurgent left off, with the Divergent Tris (Shailene Woodley) and her handsome beau Four (Theo James) itching to hop the wall and leave Chicago. The Factions are dead and the power struggle has begun to fill the void. Evelyn (Naomi Watts) wants to lead Chicago in a new direction (which remains oddly murky), while Johanna (Octavia Spencer) resists her with a new Factionless militia called the Allegiant. Tris and Four are joined by the ultra-useless Caleb (Ansel Elgort), the afterthought Christina (Zoë Kravitz), and Peter (Miles Teller), who serves as the franchise’s version of Gollum. Once outside the wall, they enter The Fringe, where they knock heads with a scientist/bureaucrat/philosopher named David (Jeff Daniels). There’s a sexy new soldier girl (Nadia Hilker) who conveniently shows up when the crew needs guns or gadgets, but David is the only new character of consequence.

This lack of new blood is pretty indicative of the franchise’s mentality; don’t make things too challenging for the characters or the viewers. If Tris is trapped inside a seemingly inescapable maze, just allow her to shoot through the walls. When Four is surrounded by a dozen heavily-armed guards, just give him the ability to punch and kick everyone into submission. If the gang needs a fast getaway, just have a space pod handy. Even the Factions have been dumbed-down to just two groups: the Pure (genetically pure super-foxes like Tris) and the Damaged (genetically flawed super-foxes like Four). Time and time again, director Robert Schwentke and his stable of screenwriters take the easy way out.

Much has been made of splitting Veronica Roth’s final novel in the Divergent trilogy into two parts. Not only does this not impact the pacing of Allegiant, it actually moves more briskly than its predecessors. In the first two installments of the franchise, people moped around and made speeches lamenting how terrible everything was. In Allegiant, people run around and make speeches lamenting how terrible everything is. Of course, it may be physically impossible to make a story this thin any thinner, but at least it pursues its pointlessness with more urgency this time out. 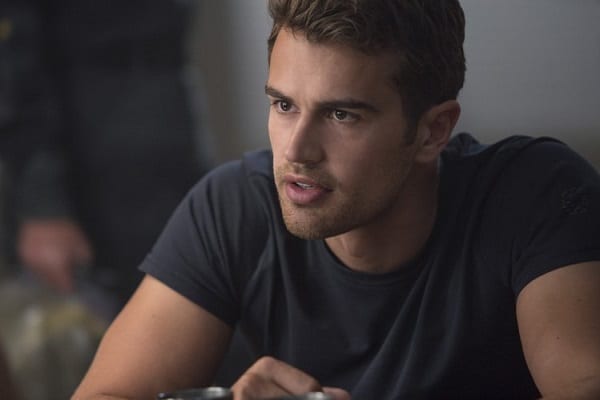 Saying that Allegiant is better than Divergent and Insurgent is kind of like saying you prefer a punch to the head over a kick in the groin. This is the best entry in the series because Schwentke understands that Allegiant is just a dumb action movie instead of some loopy treatise on social justice. In fact, it’s delightfully ironic how often The Divergent Series contradicts its own value system on unity and inclusion. The only thing that makes people cooperate in this universe is a common enemy against which they can rebel; call it unity through demonization. That this enemy shifts from film to film only underscores why the Factions were created in the first place. Simply put, the villains understood human nature and they designed an elegant (albeit unfair) system to contain it. Schwentke wisely sidesteps this juicy paradox in favor of more ‘splosions and young love. 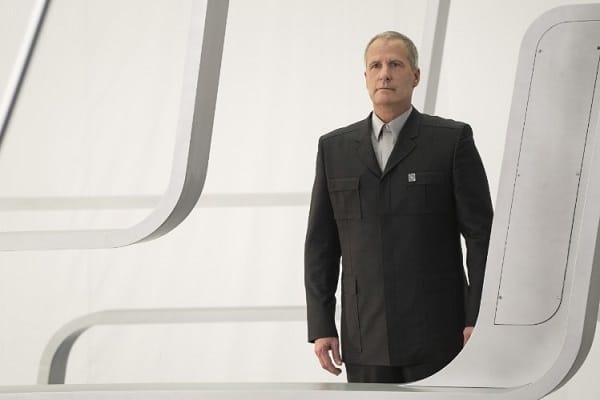 Speaking of young love, Woodley and James still have no discernible chemistry. James continues to build his case as the next James Bond, looking sexy one minute and kicking butt the next. Woodley still struggles as Tris, but the script also relegates her to mostly standing around and submitting to David’s useless genetic scans. When she finally gets into the action, Woodley has trouble interacting with all the CGI nonsense around her. A sequence where she learns to pilot a runaway space pod is particularly hilarious. Teller is easily the most compelling actor in the young troupe, though he’s underutilized until the final act. Ansel Elgort has proven himself a capable actor in other films, but he’s miserably adrift between comic relief and hapless schmo. Daniels, of course, does the most with his limited time, giving these whippersnappers a crash course in screen presence.

There’s something almost comforting about the blandness of The Divergent Series. You know exactly what’s going to happen, so you can sit back and let the idiocy wash over you. Still, The Divergent Series: Allegiant is just too lazy and glum to be much fun. It’s the type of drama-aversive film that immediately shuffles to the back of your mind when the credits start rolling. It’s not a bad movie, exactly, it’s just… there.