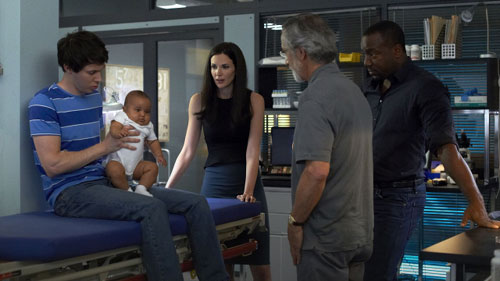 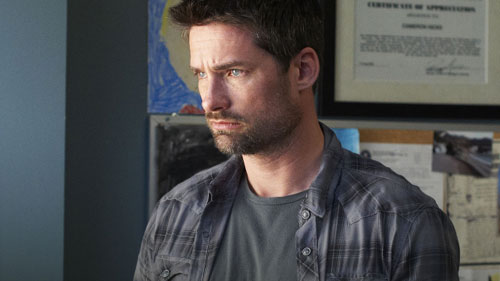 Last week’s high-flying episode of Alphas was the highlight of the season and showed the remarkable potential for this series. It ended with the tragic death of Rosen’s daughter Dani, who also was romantically involved with Cameron. Stanton Parish set off the bomb that killed her, yet both guys blame themselves for her death. Watching Rosen struggle to choose a casket is a torturous moment and played just right by David Strathairn. He utters few words in this episode and reveals so much with his face. He slowly walks through Dani’s apartment and tries to comprehend that his daughter is gone. On the other hand, Cameron seethes with anger towards Rosen, Parish, and himself. When they come together in the end, it’s their hatred that’s keeping them from curling up in a ball and quitting. They promise no leniency for Parish, who may not realize the fierce enemy he’s created. Instead of just trying to stop his plans, they’re ready to actively search for him with only vengeance on their minds.

“Life After Death” is a quieter story that’s necessary to set the stage for the ultimate battle with Parish. The characters need time to process what’s happened before they can do anything. While Rosen and Cameron are out of commission, the others spend their weekend at the office unsure about the next move. Gary is ready to enjoy his pizza when a woman drops a baby in his lap and flees. He seems like the worst option for taking care of an infant, but Gary warms to the little guy. He looks like a Ben or Kyle, apparently. When the parents arrive to take him back, it’s not an easy move for Gary. This baby is actually an Alpha with the ability to inspire protection from fathers, and the “mom and dad” are obviously shady people. Nina and Bill start asking questions, and then all hell breaks loose. 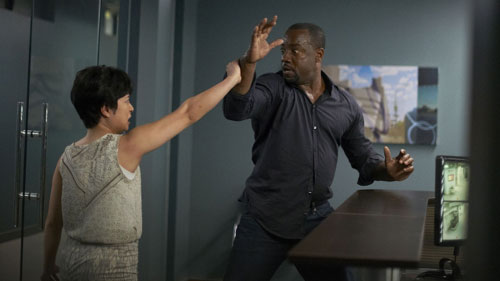 There’s little action in this episode, which makes the battle with the fake parents even more startling. He can electrocute with his hands, and she has super strength. It takes a serious effort for Bill and Nina to take them out and save the baby. This fight comes at just the right time when the pace starts dragging a bit too much. Action isn’t required for Alphas because the characters are interesting, but it helps to keep the stakes high even when Parish isn’t involved. Gary is once again the superstar of this story and shows great work from Ryan Cartwright. He never shifts into a caricature and has made Gary a believable and entertaining character throughout the series. Bill and Nina also work together really well and show how she’s become a valuable team member once again. There are no weak links in this cast, and that gives the writers plenty of opportunities to create interesting stories.

The other story line involves Rachel taking another shot at connecting with John Bennett. Dani’s death has everyone thinking about what’s really important, and her hang-ups about taking a shot with him are gone. They head back to her house for a daytime rendezvous, and it leads to a much-needed light moment when her father unexpectedly arrives. It’s the standard scene that happens so often, but its comic resolution is just pitch-perfect. While it’s still a bit harder to get invested in their romance, the actors play the emotional scenes well and sell the connection. While Rosen and Cameron are at their lowest points, this duo finds a way to connect amid all of the chaos. Her reservations about this relationship are understandable given her abilities, but they decide to take the plunge.

With three episodes remaining, Alphas is set up for an excellent final act. The ratings aren’t moving in the right direction, so the possibility of a third season is unlikely. Parish is back next week with a new weapon, so the quieter pace is unlikely to continue. Rosen and Cameron are ready for the brutal fight, and their team understands the high stakes. An interesting new ally in this fight is Clay, who shows that he isn’t just another uncaring bureaucrat. It’s clear that he doesn’t enjoy having to go through Dani’s death with Rosen but must follow the procedure. His development over this second season has been another positive trend. Mahershala Ali does a great job in a small part that never feels like a throwaway character. It’s this commitment to even the supporting parts that lifts this show about the common genre fare. The consistent writing and stellar acting sell even the sillier material, and the emotional impact of their decision makes a powerful impression this week. A quick scene with Bill and his wife deciding to care for the baby is handled so well. It hearkens back to the first season and underplays the big choice is just the right fashion.