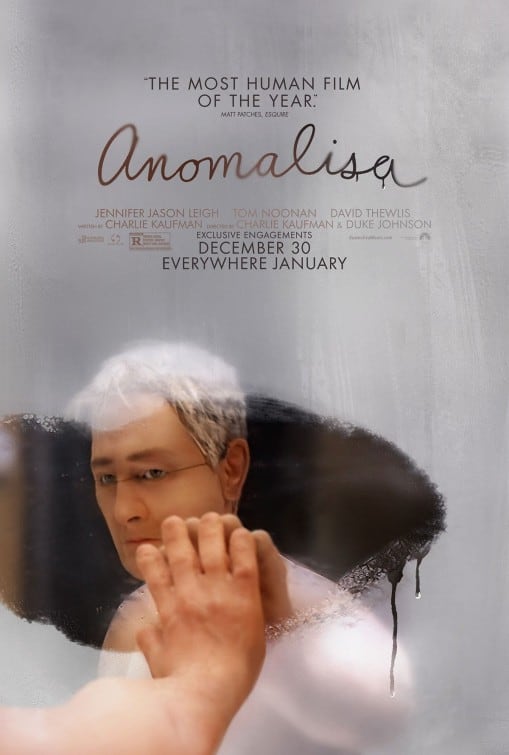 Weird is rarely used as a good quality in film criticism, but few words so completely describe Charlie Kaufman’s work as weird does. All of his films are a window into his very particular worldview, and that p.o.v. is certainly unlike anything seen in pop culture. For that reason, Anomalisa became an entry on many most anticipated lists for 2015. That Kaufman chose stop-motion to tell this story made the picture an event. So it came as a disappointment when the film was one of the year’s more mundane efforts.

Being John Malkovich and Eternal Sunshine of the Spotless Mind have an energy and heart at the center that is not present here. Previous collaborators like Spike Jonze and Michel Gondry were able to temper the overwhelming negativity Charlie Kaufman occasionally falls prey to, but this time the writer doesn’t have a director to rein things in. In all of his efforts to create an experience that is both familiar and alienating, Kaufman may have accidentally created something hostile.

The story centers around author Michael Stone (David Thewlis) and his overnight stay in Cincinnati on a business trip. He is due to speak at a conference and read from his best-selling book, “How Can I Help You Help Them?” and should be happy with his success, but Michael is deep in exploring all of the regrets in his life. How Michael became an expert in customer service is anyone’s guess, but roll with it. Michael has never been able to connect with anyone on a deep, personal level and when he reaches out to an ex-girlfriend, the results are typically disastrous, but his stay at The Fregoli Hotel turns fortuitous when he meets customer service representative, Lisa (Jennifer Jason Leigh).

Lisa is star-struck by meeting the famous author, yet it’s her voice that intrigues Michael. All of the other people present (all voiced by Tom Noonan) are literally the same, but ironically only Lisa believes herself to be an indistinguishable face in the crowd. A beautiful moment in a world full of ugliness deserves to be cherished, but the encounter doesn’t last long after the love scene (is there a prerequisite for any movie featuring puppets to include a sex scene?). From here, Anomalisa appears to gain a little philanthropic hope for Michael, yet those hopes are dashed in the harsh light of the morning after. Just one more instance of a middle-aged man using a younger woman to feel important again. Abandoning Leigh’s Lisa with time to spare was a mistake.

Everything that was beautiful about watching Michael and Lisa connect is ripped to shreds as Michael’s feelings for Lisa are quickly turned into dissatisfaction. Whatever he found special about Lisa the night before simply doesn’t exist at the end of their breakfast, and they part ways. Self-destructive protagonists aren’t new, but few are as eager to dive into the abyss as Michael Stone. David Thewlis’ turn in Naked, while also abhorrent, offered more than just misery. The narcissism on display left this viewer weary.

Kaufman has tackled alienation to greater effect in his other scripts, and a majority of the film feels like he’s repeated himself. If there were more scenes like Michael’s encounter with the hotel receptionist, some of the other stagnant transitions would have been alleviated. Dialogue for its own sake has a place in cinema, but it has to move the story forward or be pleasurable. Too often the words shared in Kaufman’s screenplay do neither. Perhaps keeping Anomalisa to the originally conceived running time of 40 minutes would have been best.

However, the choice to animate the film with puppets was still a fantastic idea. A live-action version of the film could be ignored for being a chore to sit through, but these dolls invite viewers to look closer. Short of the lines across the puppets’ faces, one could be forgiven for thinking that actors were delivering those lines. Great care was taken into designing the look and feel of Anomalisa, it’s just a shame that a more energetic Kaufman couldn’t have delivered something new to say. One wouldn’t go as far to call this picture a misfire, but Charlie Kaufman’s latest is only for a very small audience of moviegoers. And, for that reason, it’s likely that nothing like Anomalisa will be seen again.