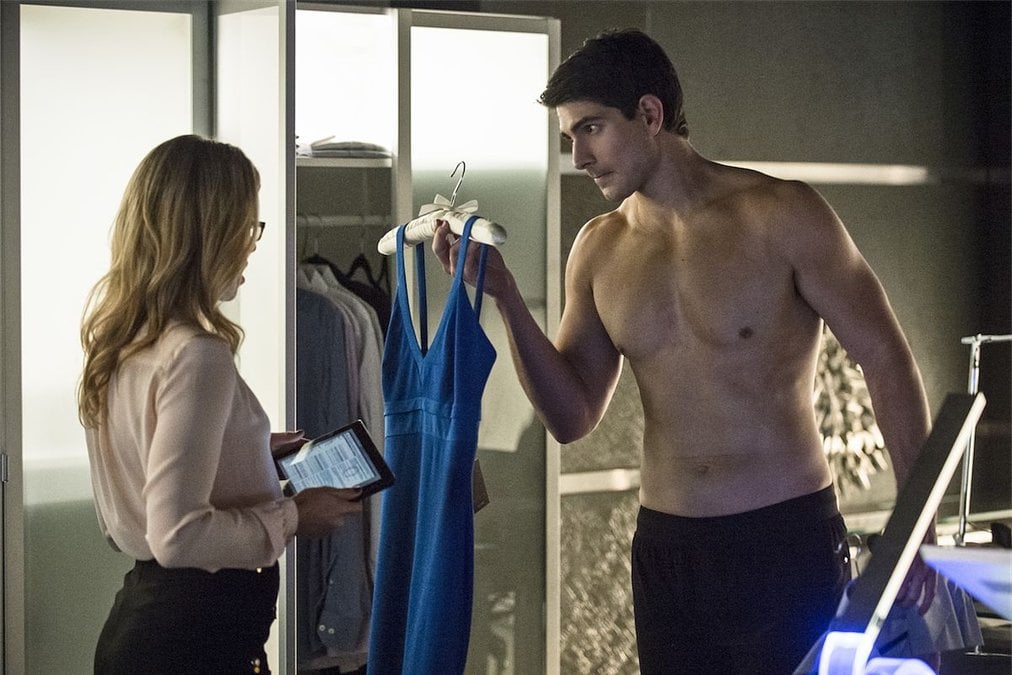 … and then Arrow went all Single White Female on us. An episode that embarrasses on a number of levels, “Draw Back Your Bow” feels more like it belongs in season one of Arrow, when pointless flashbacks and romantic subplots ruled the day, and Arrow didn’t get to do a whole lot of hero-ing around Starling City. Bogged down by a horribly written antagonist and one of the dumbest Thea plots ever, “Draw Back Your Bow” recognizes its existence as a filler episode, and embraces it, delivering scene after scene of unimportant material before throwing two major teasers into the final moments. Intriguing as the directions this season of Arrow appear to be going with some stories (League of Assassins, Black Canary, etc.), “Draw Back Your Bow” is anything but, a slog through a bunch of trope-filled writing to reach conclusions that delay interesting things further.

The real problem with the episode, unfortunately, is Cupid, a character I was excited to see. Unlike when The Huntress is in town, there’s no nuance given to Carrie Cutter; instead, her mental instability is defined only by some unsolvable condition, which makes her an easy mental case Oliver can ignore (The Huntress was merely unstable; she was much more of a character than this embarrassingly thin cardboard cutout of Cupid here). The script never really even takes her seriously: from the moment she arrives, she’s a caricature of a caricature, which removes any element of plot where Oliver has to struggle with his “no dating” rule. Had she been an actual human being and overzealous Arrow fan at the beginning of this episode, the audience would have to respect her character, and so would Oliver: and it would make him consider a life dating another vigilante, and whether powerful-yet-unstable women like Cupid or Amanda Waller-esque characters, and raise another important question: are these women, either violent or otherwise, capable of dating Arrow, a man who puts his mask before anything else?

Instead, we get Psychotic Obsessed White Woman – and worst of all, we’re bound to see her again whenever the Suicide Squad returns to Arrow (taking the place of Harley Quinn, a disappointing turn of events), bringing back an enemy so badly written she brought back memories of The Original Count in season one. And since she takes up so much of the episode, there’s only spits and sputters of other stories (none of which involve Laurel!) and require lots of being dramatic, without a whole lot of reasons to do so. Roy’s still being angsty, but there’s not a lot of leadership passed down this episode from Arrow to Arsenal about dealing with killing people, instead pushing them into another set piece to bring out frustrated Roy (when Cupid knocks his ass out without breaking a sweat after getting the drop on him). And then there’s the Felicity/Palmer kiss, which makes no sense considering how intelligent Felicity is (dating your boss, even if he’s charming and buys you expensive things? To borrow a phrase from my podcast co-host Sean Colletti, C’MON FELICITY), and how recently she was professing her love for Oliver. If that one conversation was all it took for her to give up on hope with Oliver, than he’s really got no chance now does he?

Oh yeah, and the flashbacks, which are also returning to season one levels of I Don’t Care…. wall to wall, “Draw Back Your Bow” is a disappointment (did I mention throwing Thea back on the sidelines in her normal, passive role of club owner? What the fuck, Arrow?), the first time in a long time the show’s aired lackluster back-to-back hours. Am I worried? With the League, the A.T.O.M. suit, and whenever the hell the show gets back to the Sara murder mystery, not necessarily – but I’m still holding reservations about Felicity/Oliver and the whole mentor/mentee bit with Arrow and Arsenal, which hasn’t existed in anything but the most abstract of terms to this point (and not all that effectively). Arrow‘s clearly been in a holding pattern, something that most 20+ episode seasons do at some point; let’s just hope Arrow gets out of it soon.