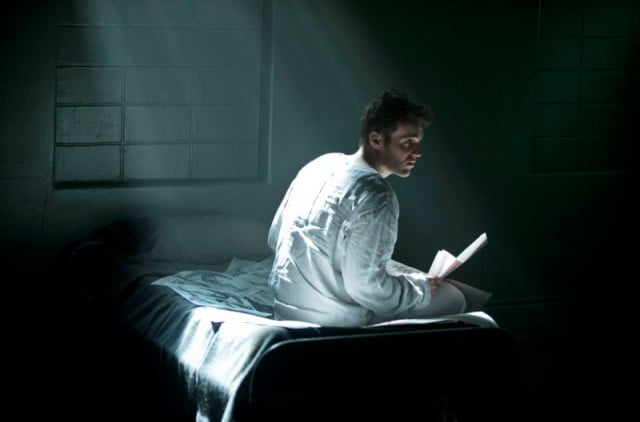 Airs Wednesday nights at 8pm ET on the CW

Arrow’s had a rough time trying to create interesting entities for him to battle – the first season’s featured a largely lifeless ensemble of suits and psychos who lack any kind of compelling quality. The Count was one of these, with a performance akin to a mindless caricature of the Joker to match (right down to being locked in a mental facility after being fed his own psychotic drugs at the end). Smartly, the writers decided to use him as a decoy in ‘Unfinished Business’ – but instead of seizing the opportunity to characterize him and/or present us with a new, more intriguing villain .. we get a doctor at a mental facility who manages to revitalize the Vertigo drug trade single-handedly, with only the help of a lumbering janitor.

Once again, Oliver comes face to face with a decision he’s made earlier: he sees another girl die from Vertigo, and realizes he probably should’ve put an arrow through The Count when he had a chance. And  struggles with it, for a fleeting moment, deciding not to shoot him in the end because he’s completely insane, which apparently renders the point moot (although it’s hardly the first mentally unstable person he’s shot before). There’s something interesting here: Oliver’s still trying to hold onto his humanity in some form, but it’s executed in kind of a dull fashion. After all, he has no problem killing other people in the episode – but the fact he’s willing to hesitate (even if it’s made convenient by the visible torture he’s been under), it doesn’t quite have the impact it should.

Without a real enemy for Oliver to conquer in either world – the doctor exists for about three scenes, until he learns the Hood’s true identity and subsequently dies – it’s up to the rest of the episode to provide intrigue, which it never really does. The usual contrivances and melodramatics are in play, but there was a number of opportunities for the show to make Detective Lance a much more interesting character, particularly with his drinking and his dedication to his career. At this point, there’s no point investing in his relationship with Laurel: despite them avoiding an argument over him going ape shit on Tommy, their inevitable swings from hatred to reluctant love to emotional betrayal is a well Arrow‘s gone to many, many times already, and it’s sure to continue.

But Lance stops drinking in the episode – something that should represent a huge step forward for his character, and at the very least, present us with some motivation for him finally putting down the bottle. Is it because he wants to be a better person? It’s certainly not to be a better cop, as he proves with his bull-headed attitude in trying to find dirt on Tommy and Oliver. He just stops drinking – and we’re supposed to feel compassionate for him, because he’s made such a step? Sure, it’s a great thing to see someone not actively killing themselves, but Arrow’ s done neither the necessary set-up or execution to make it a meaningful arc for his character.

If there’s one thing the episode does well, it’s driving an emotional wedge between Oliver and Tommy. He confronts Oliver about using him and the club as a front for his Hood activities – which include killing a lot of people, something Tommy’s shown he’s not very comfortable with. Of course, he moves from one murderer to another when he asks for a job from his father, so it will be interesting to see how the show handles that. If they’re establishing him as an antagonist for Oliver moving forward, I’m all for it – but they have to establish a reason for Tommy to want to take him down, outside of just walking up to the police and telling them.

‘Unfortunately for the rest of the episode, ”Unfinished Business’ is like many hours in this first season, showing some serious potential in the story lines it presents in the opening: Oliver’s convenient moments of conflict with his killing ways, Lance getting his shit together, and the possibility of a powerful puppeteer controlling The Count. And again, Arrow shows no inkling of creativity with these ideas, focusing on superficial, predictable outcomes with the promise of more unappealing mysteries to follow – save for the Tommy and Oliver material, which is a crucial arc of the first season they manage to nail on the head, if only for a brief moment.

Other thoughts/lots of random observations:

– Malcolm’s face in the final frame has a giant red light shining on it, just in case we weren’t sure who was considered ‘evil’ on this show.

– the women are a non-presence this week in Sterling City: Laurel doesn’t get mad at her father (doesn’t say much at all, really), and there’s no sight of Moira and Thea.

– Diggle dating his brother’s ex-wife was, is, and will always be really weird and off-putting.

– Deadshot’s still out there killing people – even though he’s headlining every newspaper and website across the world, Oliver still has more information on them than the FBI. I love how inept police are – and more hilariously, how laughably easy their information databases are to access. Few taps on a tablet, and Felicity knows what the autopsy results of an hours-old murder are.

– they never really explain why the doctor put an anti-psychotic in a psychotic drug… or how everyone in Starling City was allergic to it.

– Diggle kills a dude with a defibrillator that just so happens to be a foot away from his head. How many more times in my life do I have to watch someone get killed in that fashion?

– on the island, Oliver slaps a bowl of water for a few hours… which makes him good at holding a bow.

– Shado is a complete Asian stereotype in this episode, doing complicated yoga and spouting anecdotal stories like she’s a classy Yoda. She also tells a confusing story where everybody is a scapegoat for something else.

– remember how meaningful it was when Jimmy McNulty quit drinking? The emotional impact (and effect on his character) with Lance should be marginally as noticeable to be believable – and it’s nowhere close.

– the spinning camera shot between Tommy and Laurel was done in the most conventional, lifeless way imaginable.

– Diggle dated an FBI agent, or at least slept with her. Does this information matter? Probably not, but we’re told anyway.

– Lance has a new partner!

– Arrow‘s off until April 24th, when it returns with ‘Home Invasion’.