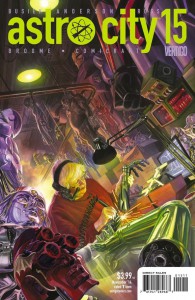 After a first half built around a central question that took its time setting up characters and mood, Astro City # 15 concludes the two part storyline focusing on Ellie, an elderly woman with a mysterious past and a proclivity for repairing robots. But while the first half of the story felt very deliberately paced, focusing on setup, part two feels positively overflowing with exposition and story momentum, taking off at a run early on and not stopping for the world.

After her trial gets underway, Ellie is quickly found and broken out of county lockup by one of her many robotic pals  and quickly returns home to confront Fred and get to the bottom of the events that have befallen her. This quickly leads us to a flashback detailing Ellie’s past, one which answers many of the questions that were brought up by the first issue, mainly how Ellie is just so good at turning bits of old toasters into the cast of Wall-E. Soon after, a confrontation breaks out between Honor Guard, Ellie, and a figure from her past, who’s been at the heart of the events of the storyline. 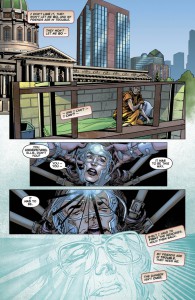 While the previous installment felt more in line with Astro City‘s more laid back, slice of life, but with superheroes mode, as seen in early stories like the Roustabout issue from Local Heroes, part two feels more like a mile-a-minute action yarn, with the story advancing at a rapid pace, cramming as much background and story into its 22 pages as possible. And while the somewhat uneven pace between the two issues does make the story arc as a whole feel a tad lopsided, it is a definite improvement over stories like the Sideliners issue, which suffered for trying to fit too much character and story action into too little space. And while that marked improvement is a plus, issue 15 does still suffer for having so much to do in so little time. The climactic confrontation between Ellie and the mysterious figure in the Mike Mignola gloves is screaming out for an extra page to fully flesh out the dynamic between Ellie and her foe, and the denouement similarly feels a tad rushed. These problems aside the storyline is still another strong entry in the new Astro City series, and Busiek shows no signs of getting stuck in a rut or over reliance on formula.

Special props should also go to the particularly good cover by Astro mainstay Alex Ross. Sci-fi nerds are no doubt already delighting in the scads of cameos by recognizable robots in Ellie’s workshop, and the partial appearance of 70s Japanese super-robot Grendizer is a fun treat.