A Wake to a Time Break

Remedy games have a reputation of providing great action, striking styles and engrossing narratives. For the third time Remedy have delivered on these core strengths even if the overall package is shakier than Alan Wake after drinking from the 100th coffee thermos. While Max Payne took on a noir theme with Hong Kong action movie influences in gameplay and Alan Wake was a cult hit for its unique personality and take on a small town horror story – Quantum Break once again is a big departure in style as it tackles SCI-FI and time traveling. What it also does is a concept that in many ways is new to gaming – incorporating a Live action TV show into the experience that continues the plot using the same actors as in-game. An awful lot hinges on the successful execution on blending these two mediums together into a coherent whole.

The meat of your time – if the ergonomics of time isn’t fundamentally broken in your world – is spent in the game aspect, spanning 5 acts and around 10 hours of shooting, talking and platforming – with a modicum of time travelling to amply confuse you. The intro to the story is immensely strong; Jack Joyce is introduced to us when he takes a visit to a university while a protest against a mysterious corporation called Monarch fills the backdrop. It starts slow, affording time to character and world building before even placing a weapon in your hand. Above all else, this is one of the games standout ideals; time may be stopping but that doesn’t stop Remedy affording a lot of it to slow, quiet moments of reflection. The basic narrative set up leaves Jack Joyce with time manipulating powers but adversely, time starts to break down with a promise that time will stop altogether. From a storytelling perspective, Quantum Break does a lot of things right – nothing happens in the game without a narrative justification, with little superfluous scenes and characters are likeable and well acted. For the most part dialogue is well written but Remedy’s history of having odd, albeit memorable juxtaposition feels more out of place here than in their previous efforts. Lines of dialogue that try to lightheartedly explain the science behind its events often make the game seem pulpy to a degree that borders on B-movie levels. Although all the characters are well acted by numerous big name actors/actresses there’s a strong suspicion that a few feel rather underbaked. Even Jack himself is an anomalous playable protagonist, there’s not much we know about him and he comes across as a mainly standard fare hero without much depth. 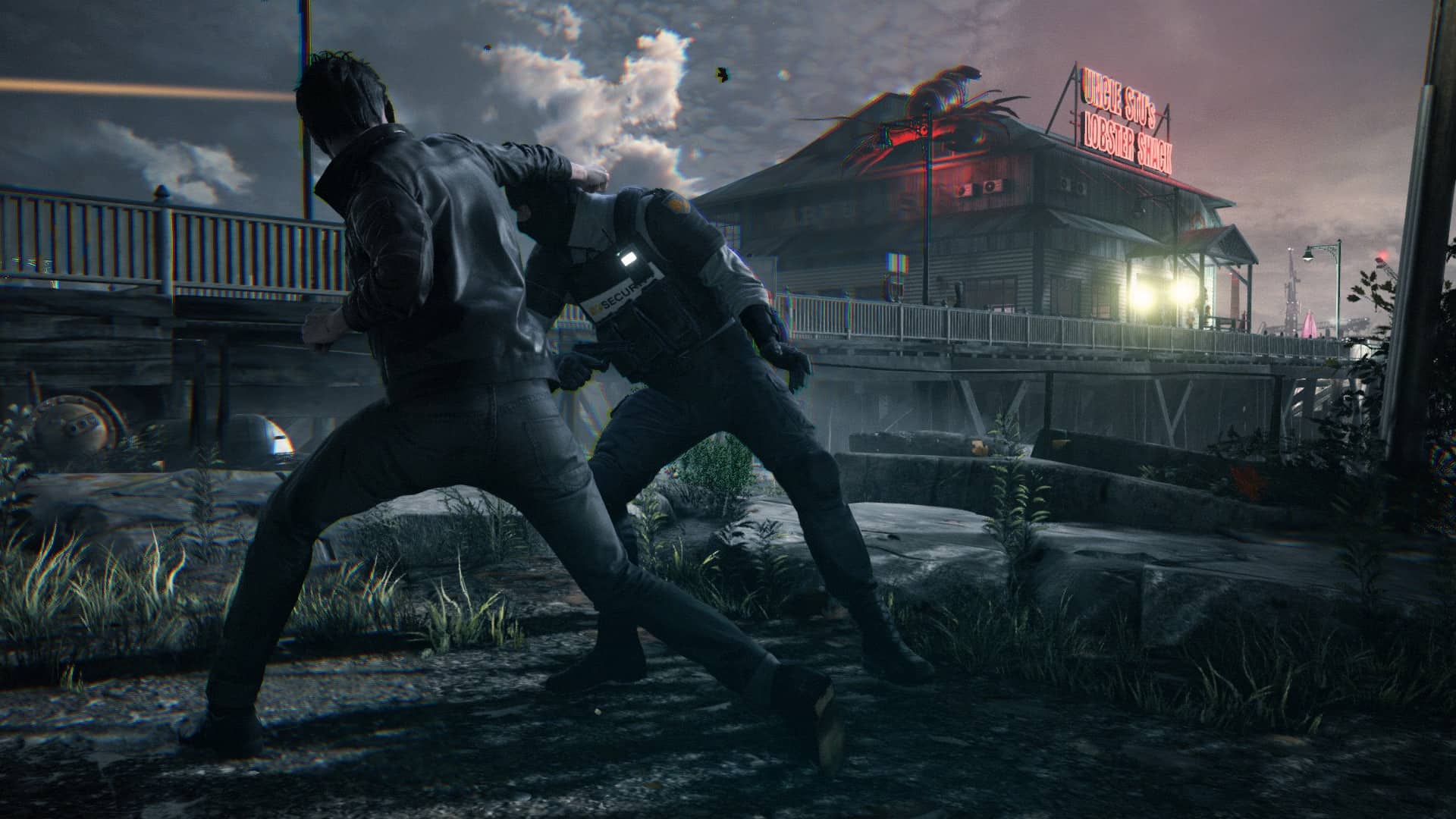 What is immediately applaudable is the self referential humour and nods to the genres own foibles, including plenty of fan service for us lovers of Alan Wake. Most standout is a series of emails containing a screenplay written by an employee of the Monarch corporation, it’s written all for laughs and nails what makes Remedy standout as creators. Equally though, too much stock is put into reading pages of long emails to understand the events happening, often entering an area with several of them, leaving you reading for 15 minutes – halting any shred of momentum or pacing. Other collectables fare better, radios that play in the background or video diaries both add a sense of place. Game endings rarely need to be a point mentioned in reviews, however for a game that puts vast amounts of stock in storytelling, a lot is riding on it for a satisfying conclusion. Therefore it’s a huge detriment that threads start to fall apart towards the end, finishing in a very rushed, anticlimactic manner. You get the impression that development limitations led to it, opting to leave many arcs unresolved with the implications of a sequel. All in all the story is engrossing and well told, but it could of benefited from some more levels or scenes at the end.

Tired of shooting hordes of people? I hope not because otherwise your eyes might spin so fast time will fast forward to an age where shooting people isn’t the primary interaction you have with a game – I joke of course…. there’s no such thing. Remedy has a pedigree with great action and in gameplay terms this follows on from Max Payne – fast paced shootouts in arcade style spaces. Any idea about strategy is quickly discarded like, well like the idea set at the start of this paragraph and is quickly replaced by simply just dispatching enemy’s in the most visually pleasing ways. That’s not a knock against the combat, it’s fast and punchy, with the addition of unique ways to take out foes. Time powers like the ability to create a shield that deflects bullets or fire a contained blast that slows down enemies within it are all aimed to make the shootouts more varied and fun. One puzzling omission is the feature of a time dive power similar to bullet time in Max Payne, it feels as though combat would have been more interesting with it as a power. Playing the game hiding behind cover is frowned upon and the game encourages you to be constantly on the move, to take advantage of the open space. Although the core of combat is solid, towards the conclusion you start getting the feeling that it’s mostly one note and an atrocious final boss encounter shines a light on how repetitive fights are after a long period of time. Aside from gunplay the game attempts to mix things up with some rudimentary platforming and puzzling, and while it isn’t that involved, it is a welcome change of pace. 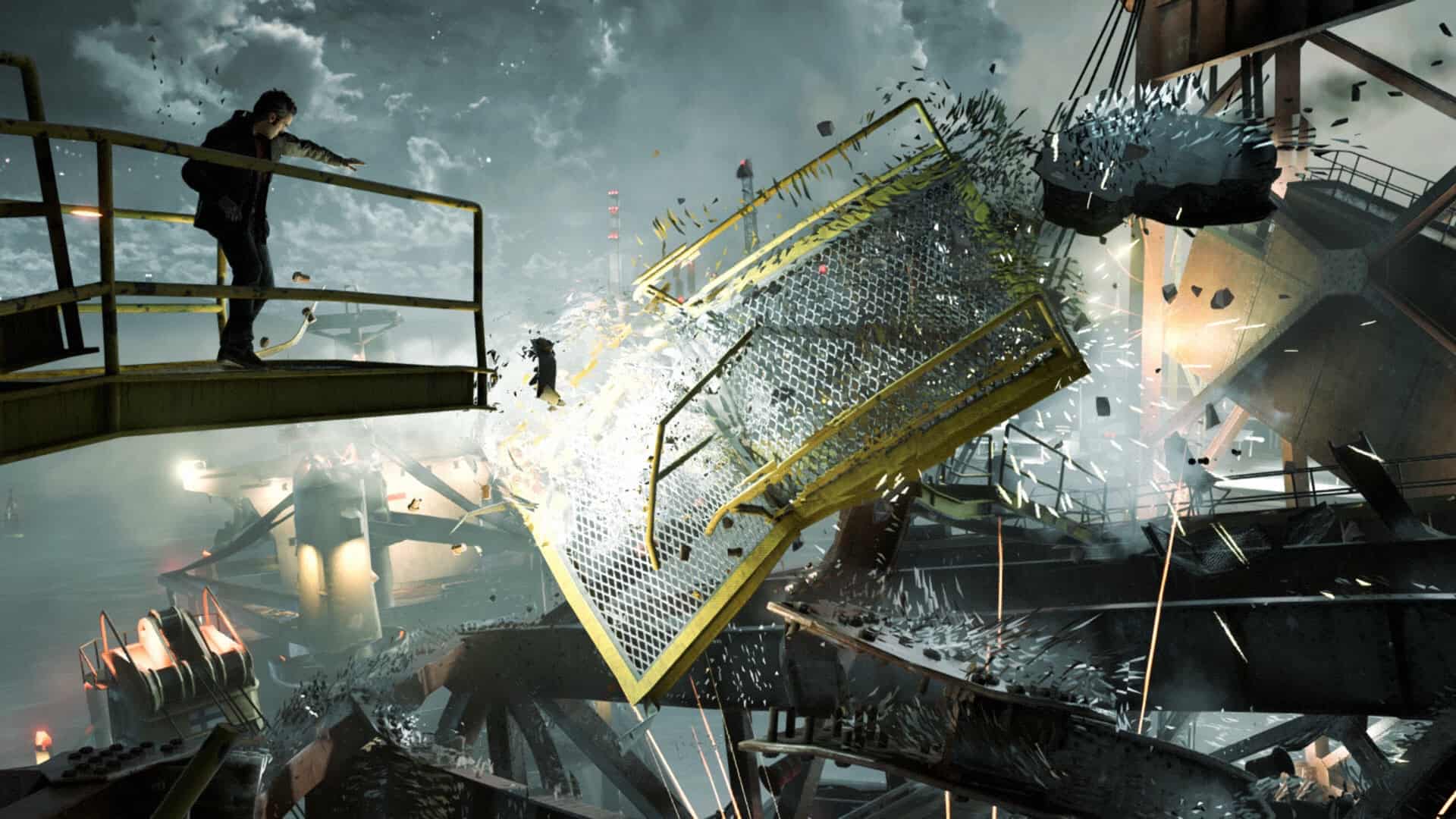 The richness of the world and level design is something Remedy has, in the past done well, with a good mix of creativity and realism. Quantum Break has a monumental amount of backstory with heavily detailed timelines and events that all lead into the game but yet, the locations you visit in the game are very limiting and lack ambition. The game is set in a city sat on the coast called Riverport but unlike Bright Falls – from Alan Wake – it has very little life about it, you never get any real look at the town itself, a good deal of the game takes place inside, in closed off enclosures. Most disheartening is the constant reuse of the few areas you do get to see in the game. As an equaliser, all the locations are insanely detailed to an OCD level, right down to the lights, logos, flooring and even written post it notes stuck on everyone’s desks – level design has a sense that a lot of architectural thought has gone into the construction of structures. The game strikes the senses visually, the effects when time stops and during set piece stutters like when a boat crashes into a bridge are unlike anything seen in the medium. The whole world around you seems to distort and shudder, giving off the real illusion that time is falling apart, enemy’s hang midair, bullet trajectories are traced like neon lights and destruction endlessly loops.

The art direction is astounding but from a technical standpoint there are some issues. There are a range of visual oddities that we can only assume are not part of the visual aesthetic. Character models have a penchant for ghosting when they move or the camera is rotated around them, leaving a shadow of the model behind momentarily. Additionally, assets and objects flicker, with textures zoning in and out of detail even upon close inspection. Aside from the obvious jokes about how lifelike the people look in the live action show, it’s genuinely uncanny how close to the actors the In game models look, with huge intricacies in the facial acting that portray a lot while saying little to nothing. A mention has to go to the brilliant audio design, not only do sound effects play a big role as storytellers but music adds richness to a world mostly unseen. The game features alongside a pulsing soundtrack, lots of licensed songs that pepper radio broadcasts and following from Alan Wake – puncture the end of each act. 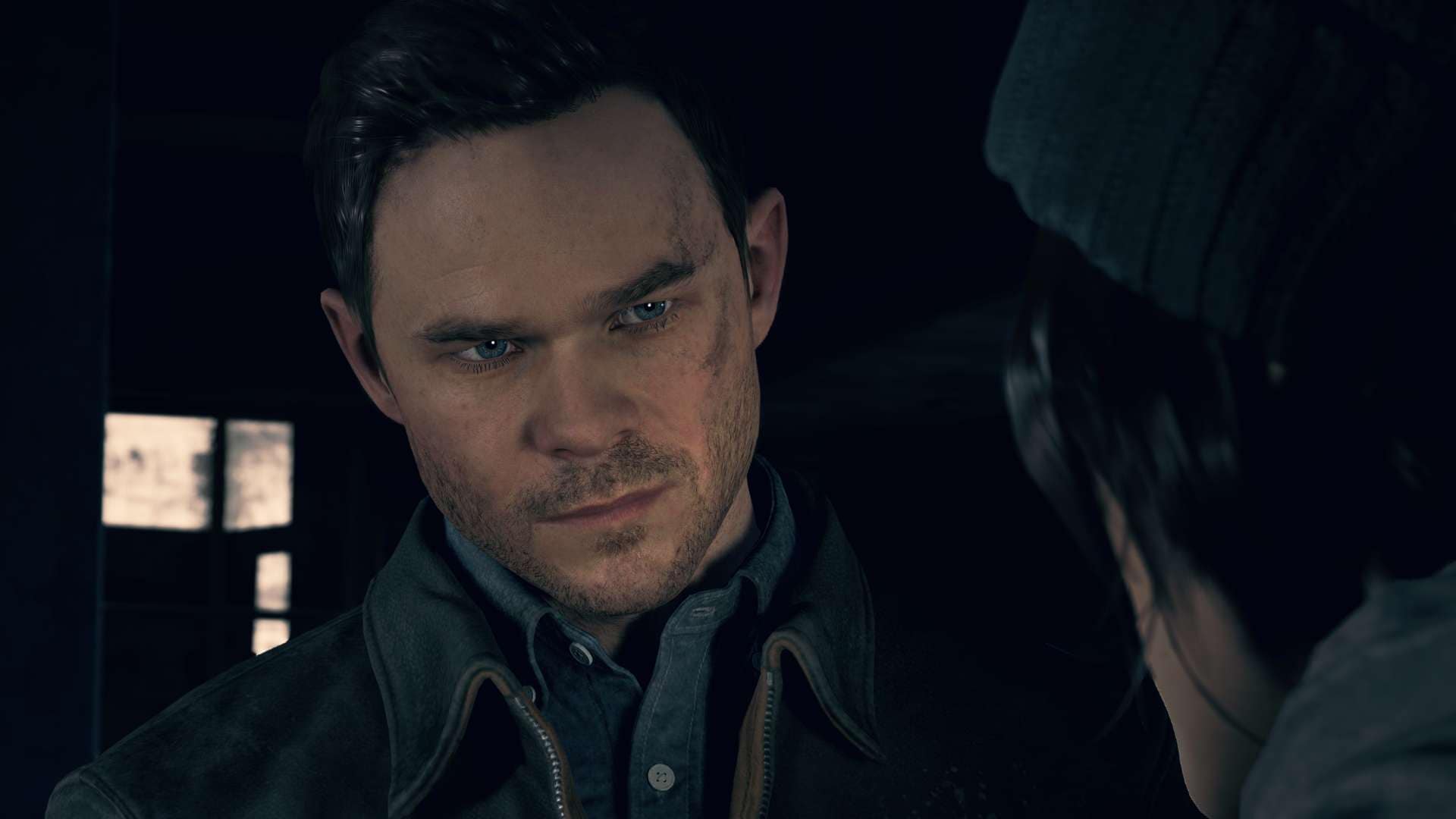 No one on any plain of sanity thought that the live action TV episodes would be tolerable at best, let alone be good. Although the show side isn’t something you expect to see on prime time telly anytime soon, and taken on its own merits I’d never give it a second glance but in marriage to the game narrative, its a gimmick that you can’t help but be taken in by. It’s mostly helped due to the good acting chops, as the special effects and action feel like a low budget YouTube series. The first episode is the weakest with each getting better with confidence, in the end though the show fizzles out with little resolution for a lot of its characters, it would of benefited to have one last one at the end of the game. Quantum Break boasts junction points before each episode of the show where you choose between two approaches to solve an issue. The biggest changes come in the form of interchangeable scenes in the show but they also have some reaching effects back in the game acts. The most divergent choice is the first one, changing what character helps you in preceding acts, in one play-through, out of two characters you will only get a glimpse of one and then never see them again while the other becomes more prevalent. Smaller details change, such as the content of emails you read and the radio host and music that is played on broadcasts.

It’s hard to commit that Quantum Break is Remedy’s best product, it lacks some personality and in several areas feels lacking, but through sheer ambition in storytelling, writing and visual flair the game implants a memorable experience that’s worthy of your Time. All we need now is a time machine so we can skip the wait till Remedy’s next game, whatever that may be.

See also  The Most Anticipated Wii U Games of 2015