Acting and directing categories  during awards seasons are always the hardest to determine. Who to choose and what for film is a constant battle, not to mention who deserves to be nominated.
Between the veteran nominees (Clooney, Streep, Scorcese) to newbies in the awards season (Fassbender, Refn and Oldman (!)), let’s see who deserves a BAFTA…

Click here to see part one of this article

It’s great to see Fassbender and Oldman featured in this year’s awards, especially the former as he was controversially not among the recent Academy Awards nominees for the same category.  Clooney and Dujardin have been highly praised for their respective roles and are the favourites to win.  Personally, I’d love to see Gary Oldman to lift the prize, because, like his Academy Award nomination – it’s long overdue.

– Michelle Williams (My Week with Marilyn)

– Tilda Swinton (We Need to Talk About Kevin)

The winner is: Viola Davis (The Help)

Competing against Meryl Streep is a bit intimidating…she has been nominated 14 times!  All nominees receive acclaim from Williams’ performance as the vulnerable Marilyn Monroe to Bejo’s delightful Pepy Miller.  Viola Davis is my choice – her role as The Help‘s Aibileen is inspiring, emotional and understated.

– Judi Dench (My Week with Marilyn)

The winner is: Octavia Spencer (The Help) 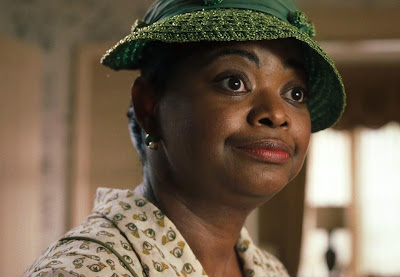 I love that Melissa McCarthy has been praised for her hilarious performance in Bridesmaids – its not often you see a lady who shits in a sink get nominated for  an Academy Award and a BAFTA!

It is strange to see Mulligan get nominated for a small role in Drive in comparison to her bigger and more pivotal role in Shame and it must have been hard to choose which film to nominate Chastain for after her bumper year of The Tree of Life, The Help and The Debt.  It is surely in the bag for Octavia Spencer – her performance as Minny is the more quietly funny performances and a role she was born to portray.

– Kenneth Branagh (My Week with Marilyn)

The winner is: Christopher Plummer (Beginners)

It is strange to see Jonah Hill feature in the Best Supporting Actor categories – this is the kid from Superbad, for crying out loud!
Broadbent, Branagh and Hoffman are all previous winners but none of them have been singled out so much as veteran actor Plummer.  My money is on the veteran :)

– Lynne Ramsey (We Need to Talk About Kevin)

This is probably the closest category – with Drive, The Artist and Tinker Tailor Soldier Spy in the running, the nominees have a pretty even chance of getting that prize.  First things first: Scorsese shouldn’t win.  He is going to receive a Fellowship to BAFTA so he doesn’t need another prize; talk about rubbing it in…!
It’s difficult to agree with Hazanavicius’s homage to silent cinema, Refn’s moody and reclusive Drive, Ramsey’s emotional turmoil drama and the grainy outlook of Tinker Tailor Solider Spy.  Seeing how overshadowed Drive has been during the awards season, Refn deserves the prize for his critically acclaimed film.

The winner is: The Artist Ahhh, Best Film – the big prize.  Always the one people want to receive and the hardest prize to award one film.  All of them are equally brilliant yet each have a certain quality that makes them shine brighter than the rest.  I think The Artist will win Best Film as it has managed to revive a genre most people thought was long gone, which was a gamble that has paid off handsomely.

Be sure to comment or even make your own predictions! :)