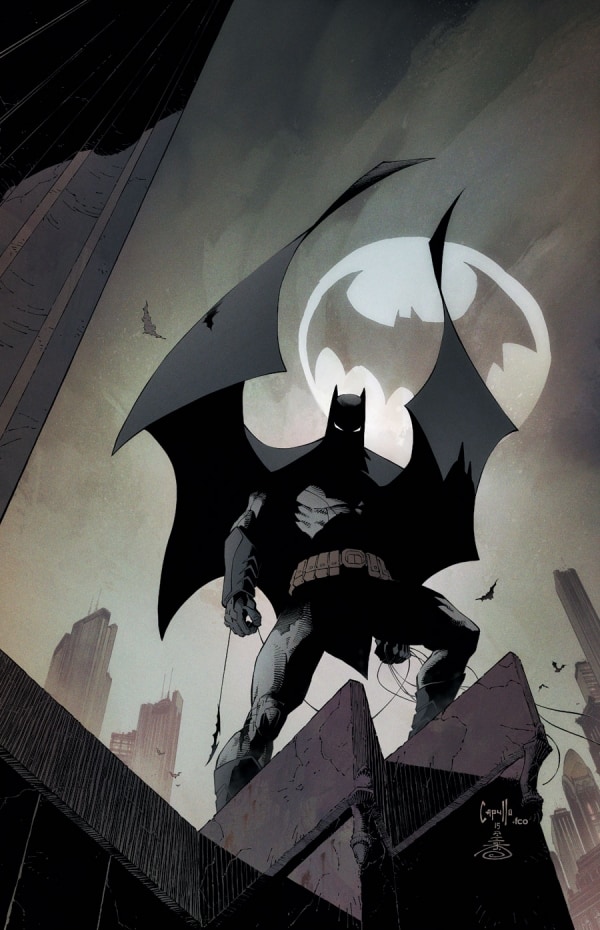 The dramatic payoff to the “Superheavy” arc was the last issue when Bruce Wayne regained his memories and became himself again.  Wayne telling Alfred, “Save it for the car.  Let’s go to work,” announced that the true hero of Gotham City was back.  In some ways, the return of Batman in Batman #50 is a fait accompli but it’s been that since the end of the “Endgame” storyline when Scott Snyder and Greg Capullo appeared to have killed both the Batman and the Joker.  Just as it appeared that “Superheavy” was a Bruce Wayne story disguised as a Commissioner Gordon story, Snyder and Capullo give Gordon one more issue to be his version of Batman and to save Gotham City as only Batman can.

Many men and women have tried to embody the spirit of Batman over the decades. But unlike a lot of them who have had to learn to be a hero, James Gordon has always been one. His time as Batman has been the latest heroic contribution he has made to Gotham City. As has been evident from every time he has a nicotine fit and starts sucking on the candy cigarettes in lieu of the real things, Gordon has been the hero that Gotham City needed even if he struggles in the role of Batman. Snyder even gives Gordon the chance to say so in this issue; he knows he’s not the real Batman and he never was going to be. At best, he was a substitute but he was exactly what Gotham needed.  Most of the time , the city requires him to be its top cop but since the last Joker attack, it demanded that he be its hero more than its commissioner of police.

See also  Inside Out 2011: 'Four More Years' - A Romantic Comedy In The Best Sense

This issue may be the big return of the one true Batman but Bruce Wayne doesn’t save Gotham. Sure, he fights the increasingly terrifying Mister Bloom and, borrowing a page from Gordon, gets to use a Bat-Mecha suit (complete with bunny-like ears) .Wayne serves as the distraction while Gordon tackles the true danger of the growing dangerous energy field that Bloom has unleashed. Battered and seriously injured, Gordon rises to the occasion, using his brains and his bravery to save Gotham City. Snyder and Capullo’s Bruce Wayne has constantly been under attack by Gotham City while their Gordon has been defending a Gotham that’s continually under siege. That says almost everything you need to know about James Gordon. 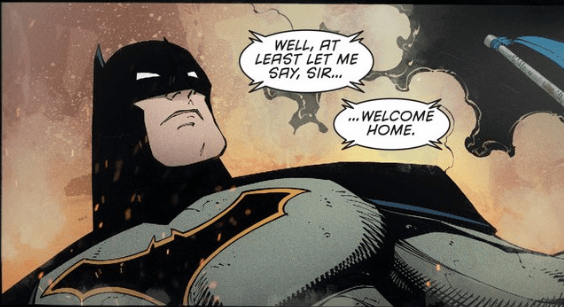 That’s not to say that Bruce Wayne sits around and just watches Gordon save the day. Greg Capullo subtly redesigns Batman’s costume, remaining faithful to tradition while adding just a touch of flair and color that’s been missing for a while now. And Capullo, inker Danny Miki and unsung hero of the creative team colorist FCO Plascencia take every opportunity possible to remind us just how dynamic and outright cool Batman should look. The hero shots that Bruce Wayne gets to make up for the past year of his being sidelined in his story. From his triumphant revealing return to the dramatic rescue of the boy who would be Robin, Capullo and company create a number of truly iconic images that boldly proclaim Wayne as the one and true Batman.

Even when Snyder and Capullo “killed” Bruce Wayne, his return was a foregone conclusion. So the story was never going to be about “Will Bruce Wayne return?” The story that Snyder and Capullo had to tell was “How?” and “Why?”  Batman #50 highlights the costs that Bruce Wayne is willing to pay to be Batman but it also shows why James Gordon was the Batman that Gotham City needed to defeat Mister Bloom. This issue features the most optimistic ending to a Snyder/Capullo Batman arc.  The battle over the heart and soul of Gotham may be never ending but Gotham has its heroes that are willing to be Gotham’s champions.