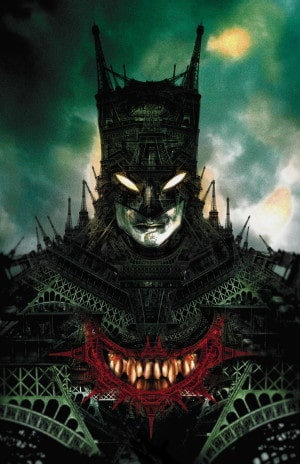 Batman Europa #3 more than makes up for the lackluster writing of the previous issue. The issue starts with Batman and Joker in the catacombs of Paris. Time is ticking away as the Trojan Horse virus eats away at Batman’s sanity. As his body slowly succumbs to the deadly virus, he must trust the Joker more as they move close to the capture of the mysterious Trojan Horse character. Is Batman losing his grip with reality as the virus ravages his mind? Is the Joker really starting to make sense?

I must say that I enjoyed the writing much more in this issue. Despite the fact that the issue is the least action-packed of the series thus far, the writing in this issue is top notch. Having a bit of the story told from the perspective of the Joker was especially fun. The banter between Batman and Joker draws a few chuckles as it’s clear that Batman is slowly losing his mind to fever, while Joker is somehow becoming more clear-headed.

Art responsibilities are taken over by Diego Latorre (Wildstorm’s Dante’s Inferno), who does an amazing job setting the tone of the book. The art is absolutely stunning. Each scene has a very distinctive feel. Every stroke is fast and aggressive for the action scenes. The entire book feels like a nightmare that slowly comes to life as the reader goes along. It’s a dark, whimsical journey for the eyes. As the book progresses, the visuals start to separate, giving the feeling that Batman is getting dizzier and dizzier as he fights for his life. By the time readers reach the end of the book, the nightmare is fully visualized when readers are treated to what Trojan Horse actually looks like.

I won’t spoil it here, but there are some really interesting plot developments in the book, especially with the reveal of Trojan Horse. The issue could very well be the saving grace of the series. It was a much more enjoyable read than the previous issue, which had a lot of action, but left me wanting more to actually read. This issue is chockfull of dialogue. There are a few spots where the Joker says something that makes Batman laugh, which is a little  charming. Despite the fact that these two characters are supposed to hate each other and be complete opposites, having them share a moment is kind of funny.

Batman Europa #3 is stunning and fun. When I reviewed the last issue, I stated that the art was the reason to pick up the book. This issue really turned around my view of what writers Matteo Casali and Brian Azzarello were trying to accomplish with the arc. They’ve really found their footing, and I am anxiously waiting for next issue’s conclusion if it finishes anywhere near as strongly as this issue.