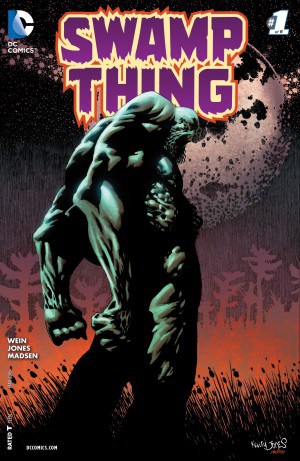 Swamp Thing is one of the very best series from DC Comics in the past five years, from Scott Snyder’s revival of the character in 2011 to Charles Soule’s grandiose world-building years later. It’s also home to perhaps the saddest cancellation in those same years. It helped whenever readers were treated to a two-issue Swamp Thing comic tying into DC’s Convergence event, penned by the monster’s creator, Len Wein, and drawn by Casey Jones, an artist with a distinctively vintage flair, but the fact it was a tie-in to such a sprawling (and convoluted) event held it back from being the exciting throwback it could have been.

Enter 2016’s Swamp Thing #1, the start of a six-issue miniseries from the same creators, unshackled by the grip of Convergence and left to shine unfettered. It’s an engrossing start to what appears to be delightfully quaint in its lack of complexity and scale, at the same time unplagued from any conventions best left in the past.

Releasing in the modern context of DC Comics that welcomes heavy, multi-faceted stakes, this comic, even generally lacking the trappings of a superhero story, begins by setting up a simple monster story that seems to affect just a town or so. It’s a comic that takes its time and is at times methodical, allowing readers to take in the environment and spend time with its protagonist. Instead of wearing readers down with redundant narration that does no more than describing what the reader can simple look at in the art, Wein’s script does a wonderful job of meshing with Jones’ art. The beginning, for example, simply gives readers a look around at the swamp the titular monster resides in with the art, while the narration does a great job of describing the sounds.

Modern refinement is not just evident in this meshing of script and art, but also in the undoubtedly retro art itself. While much of the comic book art of days past are ailed by flat colors that fail to pop, Michelle Madsen provides dynamic and interesting work. The end result is a swamp environment filled with twisted detail and characters with ominous expression. Some of the characters and violence are grotesque, but nothing gory or uncomfortable. Throughout, this comic is light. The action is more rough and natural than energetic, a battle with a simple alligator spanning several pages. Madsen’s work brings a palette of oily greens and thick, dark blues.

Swamp Thing’s characterization is certainly much simpler than what was offered by Snyder and Soule. 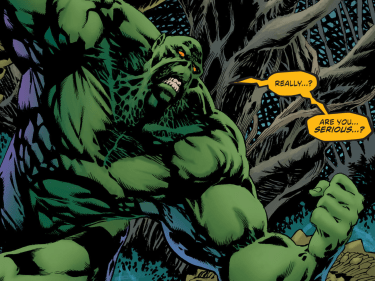 Wein’s Swamp Thing doesn’t concern himself with the bigger picture, and appears to have gained oafish qualities in the banal stretches of time since his transformation from scientist to swamp monster. He simply tries to live and do some good, his intelligence seen only in passing bits of verbiage. Occasionally his dialogue comes off as overly simplistic, turning the monster into an unrecognizable full-blown oaf for brief moments, which is the only disappointment in this appropriately simple read.

It’s a real shame this is just a mini-series, because this comic is a warm blanket I don’t want to take off. Don’t expect anything as epic as what Soule offered, but do expect something incredibly easy to enjoy.