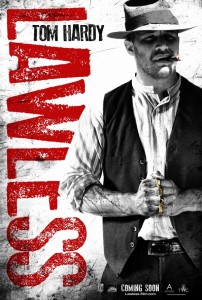 In 2006, the creative filmmaking duo of John Hillcoat, director, and Nick Cave, screenwriter, floored many a serious movie goer with their brutal, cold, austere period piece The Proposition. Set in the turn of the 20th century, the emotionally and graphically violent piece had Australian star Guy Pearce in the lead role as the most sensible of three criminal brothers, caught between a rock and a hard place by small town sheriff Ray Winstone, as he is tasked with tracking down an killing his own brother, played by Danny Huston. The film played up the idea of a tightly knit band of outlaws whose name recognition attained legendary status, striking fear in the heart of any who hear it. Now, in 2012, the same team behind the camera gives audiences a spiritual sequel of sorts with the prohibition era thriller, Lawless.

It is the early 1930s in the beautiful Virginian country. The land of the land forbids the sale of alcohol but words written down on paper by some stuffy white collar folk carry little weight  when set against the entrepreneurship and working class grit of the Bondurant brothers, Forrest (Tom Hardy), the de facto leader of the band, Howard (Jason Clark) and the youngest, Jack (Shia LeBoeuf). Selling alcohol is their bread and butter, bootlegging cases deep into the night, coupled with a swell little diner deep in the heart of Virginia, spruced up with the hiring of the lovely Maggie (Jessica Chastain). The name ‘Bondurant’ carries a lot of weight around these parts, with locals, with the odd mixture of gullibility and exaggerated stories giving birth to the crazy notion that the brothers, in particular the stocky, leather voiced Forrest, are literally invincible. The older brothers are the brain and brawn of the family business while Jack, along with vying for the heart of a preacher’s daughter (Mia Wasikowska), helps them out while trying to set up his own small enterprise.  The challenge to their aura of invulnerability arrives from Chicago in the form of Special Deputy Charlie Rakes (Guy Pearce), who looks to put an end to their independence and, provided he gets the chance, prove that they can be killed. 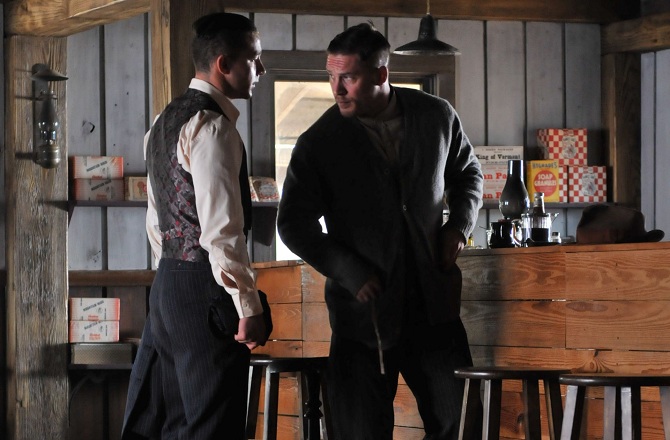 ‘Visually, Lawless is an immaculate production.’

Where Hillcoat’s previous two projects, The Proposition and The Road, were predicated on an oppressively violent and unforgiving atmosphere in which hope had little space to breath, Lawless adopts a certain tonal shift, relishing more in the sense of adventure that can arise out of the setup rather than embrace the sense of doom and gloom characterizing the two aforementioned films. The world of Lawless recognizes the inherent violence of the circumstances (the era, the social context, the behavioral patterns of the protagonists and antagonists) and has a few surprises up its sleeve in how it depicts said violence, with a couple of instances proving quite shocking, but overall the atmosphere is somewhat gentler, more melancholic and viewer-friendly and was the case in The Proposition, for example. Director Hillcoat and his cinematographer Benoit  Delhomme possess a sharp eye in bringing these part of the United Sates to vivid life, which itself is compelling given that the story is set in the countryside, not the big city where most of America’s most famous criminals made names for themselves.  Visually, Lawless is an immaculate production.

If one were to simply concentrate on evaluating the movie’s plot, Lawless is perfectly fine, offering the requisite high stakes as each side further commits itself to what they believe to be the correct cause with increasingly audacious acts. Shia LeBoeuf and Tom Hardy are both provided love interests with Wasikowska and Chastain respectively, which lends the journey a bit of an emotional core, although as is frequently the case when dissecting the role of female characters in these period piece gangster flicks, neither actress is faced with steep challenges as far as character depth is concerned, even though each has terrific screen presence. Only two of the three brothers are given proper arcs, unsurprisingly those played by the two more recognizable names, Hardy and Leboeuf, whereas Howard, played by Jason Clark, is explored in more cursory fashion, used more as a symbol than anything else. 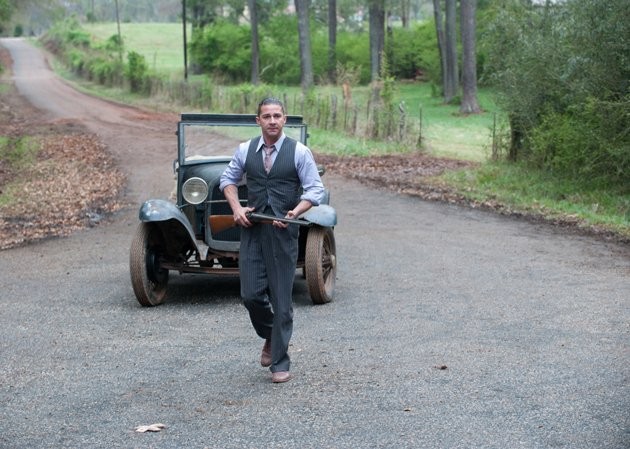 That, however, is where there true depth and richness of the film lie, in the symbols that these characters embody and how their powerful grasp over the more blunt plot developments.  Hillcoat’s picture, even more so than his Australia-set crime drama from 2006, is obsessed with the idea of legendary figures, their hold on the imaginations of the common citizens who dare not dream as large as they, and what type of opposition can emerge out of their existence, the latter point given a special flavor in this case, first, by having the real villain of the piece a man of the law (which would normally see that character fit the bill of the hero) and, second, come from a metropolis like Chicago to handle what he understands to be simple, filthy country boys. Nearly everything about the brothers, from their demeanor, the choices they make, to the reactions they stir in others, informs the audience about their figurative legendary status. Howard, the one of the three viewers see less of, appears to represent the trio’s ferocity, exemplified in the scene when he willfully bruises two local police officers who wish to enter the Bondurant diner for investigative purposes. Even police are warned about the fate that awaits them if they opt to challenge the family. Jack, the youngest, still impressionable to a degree, is driven by the desire to start his own alcohol-based business, in part to be a bigger man, but in doing so under the Bondurant name, he ensure that the potency of the family’s name lives on, the best scene being when he convinces a notorious gangster (Gary Oldman, in a fine role but one that does not give him much screen time) to purchase liquor from him rather than usual the suppliers. From a soon-to-be legend to an established one, so to speak. Forrest is the embodiment of the legend. Tall, muscular, he is not one to mince words, speaking rarely, yes, but when words emanate from those tight lips of his, the words carry meaning and people had better be sure to take note. He has been shot before.

Even Guy Pearce’s special deputy’s steadfastness in spoiling the Bondurants’ plans is partly explained by their place in contemporary Virginian history. First and foremost, the fact that they flagrantly break the law is sufficient reason to grind his gears, and yet the initial tête-à-tête between the two forces does not possess the same vitriol or disdain the following ones do, which is only after the antagonist learns of the near-superstitious belief the locals adhere to. He is from Chicago, he is a great cop, a man who means business and no hillbilly who has deluded backwards people into believing he is immortal is going to spoil the task at hand. As an exploration of what it means to be a legend, through the prism of a solid gangster film, Lawless is scores high marks. 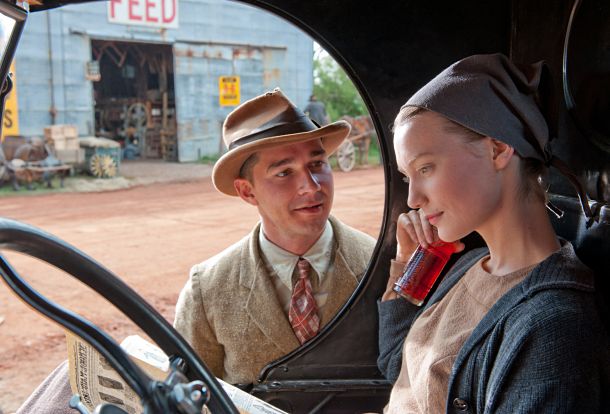 ‘The real star of the show is Tom Hardy, an actor whose popularity has risen stupendously in just a couple of years, but like a fellow Brit, Michael Fassbender.’

The cast is quite good across the board, however small or great the roles themselves may be. Shia LeBoeuf, an actor who has, for a variety of reasons, most of which have more to do with his association with director Michael Bay than with his skills as an actor, has earned the scorn of many of movie buffs. In all honesty, he is not that bad at all in Lawless, playing up the southern twang perhaps a bit much, but his youthful rambunctiousness is a nice element in the onscreen family. There is a wide-eyed aspect to his performance which fits like a glove in the context of this story. The real star of the show is Tom Hardy, an actor whose popularity has risen stupendously in just a couple of years, but like a fellow Brit, Michael Fassbender. His role in Lawless, oddly enough, resembles that of Bane in this past summer’s blockbuster, The Dark Knight Rises. Forest is a man who impresses (and intimidates) as much by what he says as by how he looks. Mere grunts, of which there are many in his vocabulary, create any kind of effect, from incidental comedy to suspicion. It would be foolish to contend with him, but he has a heart. It may be well hidden, but it is unmistakably there. The odd man out in the entire cast is Pearce. Playing up the ‘evil’ cop role is one thing, but it does, admittedly, feel at times as if he is going for something that does not directly correspond to what the overall mood director Hillcoat wants to convey. No one doubts he can play evil, the real question being can he play the sort of evil required in this particular film. Due to the cartoonish performance, the answer is a wishy-washy ‘sort of.’

Whether one wants to consider Lawless as the last film of the summer slate or the first of the upcoming autumn season, the important news is that it is superior to a lot of what has been coming out in recent weeks and by a healthy margin. Groundbreaking? Not so much, but very well made and it explores some compelling ideas, making the story feel larger than it otherwise would have been. 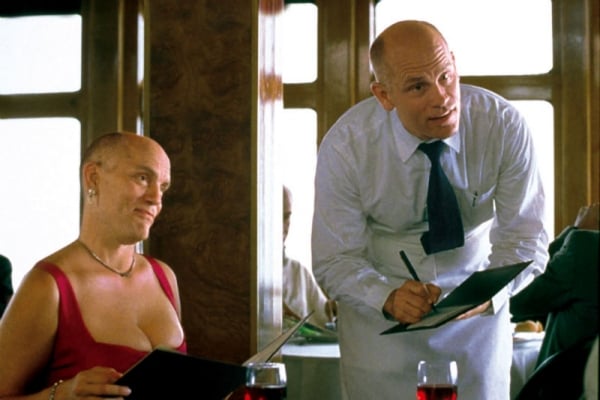