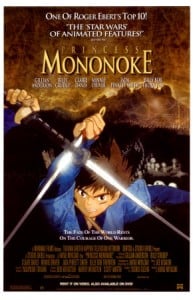 We all have pop-culture blind spots, and one of mine has been, for a long time, the films of Studio Ghibli. For some of you, the very notion that I haven’t seen every Studio Ghibli release over its near 30-year existence may invalidate my level of fandom. What’s more, the fact that I haven’t been universally bowled over by Ghibli’s films—prior to this week, I’d seen Ponyo, The Secret World of Arrietty, and Grave of the Fireflies—might make me sound inhuman. Grave of the Fireflies is something of an outlier, a purely adult piece of animation that wasn’t directed or written by Hayao Miyazaki, the Walt Disney or John Lasseter figure of Studio Ghibli. Miyazaki is clearly a prolific and respected figured in the world of film, so why have I felt so disaffected in watching his other films?

Something I noted as I began watching Princess Mononoke for the podcast, something I’ve noted when watching other films from Ghibli, is the style of animation. The way the characters and objects in these films move looks just a bit different from anything in Western animation. I can’t particularly explain what it is about this style—which isn’t specific to Miyazaki or Ghibli, but seems widespread enough to affect all Asian animation—that stands out in such a way to distract me or take me out of the story. And let’s be clear: this is a Me Problem. I’m never conscious of this being an issue until I actually sit down to watch a foreign piece of animation (and it’s always animation specific to Asia); once the film begins, I’m reminded of this niggling problem. 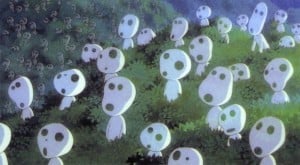 Though I was thinking of the seemingly awkward movements early on in Princess Mononoke, I found myself becoming quickly enraptured in this story. What is it about Princess Mononoke, an epic story about how humans and nature have always clashed with each other, that hooked me in a way that Miyazaki’s other films haven’t? I’d like to say it’s because the tone of this film is more mature, more adult. While that is pretty much an irrefutable fact—it’s rare that you’ll see an animated movie distributed in North America by a subsidiary of the Walt Disney Company where people get their heads and arms sliced off by arrows—it’s not as if I’m repelled by family films in general. However critical I may be on the podcast and in these extended thoughts, I do love Walt Disney Pictures’ movies. Well, some of them. But the idea that I would only be swayed by a more adult form of animation doesn’t hold a lot of water.

Another reason why this notion doesn’t stand up to deep thought is that Spirited Away, a film I was not particularly enamored with, isn’t as juvenile in tone as Ponyo or The Secret World of Arrietty are. (If not juvenile, I would argue that those two films are far less complex, or aren’t attempting to be very complex, as Princess Mononoke or Spirited Away.) I know the film is as beloved as Mononoke to many, and based on my reaction to this film, I’m tempted to revisit Spirited Away, but I was left cold by its story and characters. I admired the artistry, but I didn’t much like the film, which felt prickly and unfeeling in a way that didn’t make any sense to me. It’s one thing for the main character of that film to be prickly, but the movie itself was pushing away from any kind of audience emotion or love.

The tone in Princess Mononoke is more natural, I suppose. Both this and Spirited Away have roots in the real world, but very quickly in the latter film, the protagonist escapes the real world and goes into a fantasy world. In Mononoke, there’s a blending of reality and fantasy from the outset so that the audience is at least aware of such a heightened setting. The opening sequence, where we meet Ashitaka, the lead character, is stunning if only as seen as a statement of purpose from Miyazaki. Ashitaka does battle with a demon that has taken over the body and spirit of a giant boar, hoping to stop the demon before it demolishes a nearby village. The intensity of this battle, along with the sheer WTF appearance of this freaky being, is conveyed in a confident, matter-of-fact style. Miyazaki isn’t shoving the battle in our faces, as if to brag about what he’s doing with animation and how mature it feels. It’s just there; it’s on us to accept or reject the tone. 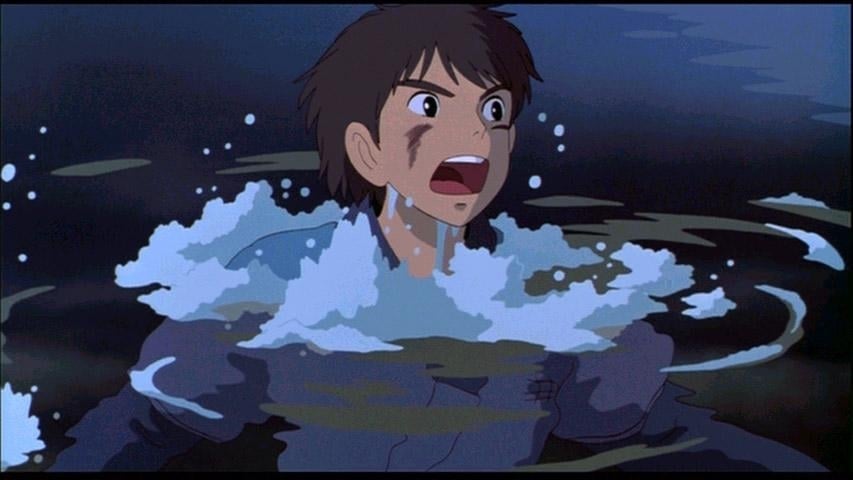 This was also the first time I was truly overwhelmed by the animation prowess from Hayao Miyazaki and the animators at Studio Ghibli. While I’m impressed by Miyazaki’s apparent dedication to the story—he’s reported to have personally approved each of the 144,000 cels (this is an exceptionally long animated movie, at 135 minutes) and had a hand in drawing roughly 80,000 of those frames—what struck me was the beauty. I mentioned this on the show, but the most striking aspect of this film is that it’s very confident and assured, without ever being arrogant. The animation, for example, is exceptionally crafted, but never seems to exist solely to impress the audience. It’s not as if Miyazaki is basically saying, “Look at how pretty this movie is!” Nor is he ever bragging about the story or characters. Like the best work from Pixar (heavily inspired, as Mike noted, by Miyazaki and Studio Ghibli), Princess Mononoke earns its confidence.

Something else I loved in the film was the character development, the level of complexity  that Miyazaki even attempted to achieve. That he actually succeeds at making most of the main characters fully lived-in, three-dimensional figures is all the more remarkable. For example, the ostensible antagonist of the film, the leader of Irontown (voiced in the American dub by Minnie Driver), would seem to be a one-dimensional villain when we first meet her. We discover, through Ashitaka’s eyes, that Lady Eboshi is destroying the forests surrounding Irontown to create weapons and further the advances of her city. The notion of a person destroying the environment is an easy way to paint them negatively in modern popular culture. Whether the people in the audience are pro-environment or not, they know what this kind of action typically means in film. So the fact that we learn more about Eboshi aside from her seeming glee at uprooting the world is surprising and daring, simply because most films wouldn’t waste the time on adding dimensions to its characters.

I also wanted to give a little attention to the voice dub in the film. Because I’m a lazy American (in this case, it really is laziness I can chalk this up to), I watched the English-language dub, featuring the voice talents of Billy Crudup, Claire Danes, and Billy Bob Thornton. I’ve only ever seen the English-language dub of Miyazaki’s films (though I did watch the Japanese-language version of Grave of the Fireflies, partly because I didn’t have a say in the matter), so I was worried that Princess Mononoke would fall prey to the same problems I had with movies like The Secret World of Arrietty. In that film, for example, Will Arnett and Amy Poehler were cast as the title character’s parents. I feel like I have to couch my criticism of their work here by making it extremely clear to you, dear reader, that I love Will Arnett and Amy Poehler’s live-action work. For being Gob Bluth, Arnett pretty much gets a lifetime pass, as does Poehler for her charming and enthusiastic work as Leslie Knope. These are comic geniuses we’re talking about. But they weren’t right for the roles in The Secret World of Arrietty. Arnett’s expressive voice was trapped in a taciturn, almost zombie-like character whose rarely goes up an octave. Poehler was given a more outrageous role, but it felt too obnoxious for her to play the overprotective mother. She wasn’t as bad as Arnett, or as miscast, but both were troubling choices. 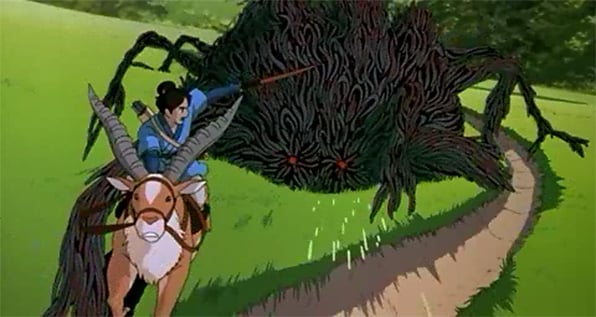 Princess Mononoke also boasts an English-language cast that’s fairly well-known, but there’s only one glaring issue of miscasting. Jada Pinkett Smith doesn’t have an inexpressive voice as one of the former prostitutes who’s now an iron worker in Irontown. What she has is an ineffable modern-sounding quality to her voice. Smith isn’t in a ton of the film, so it’s a much more minor problem for me than it was with Arnett and Poehler. Still, in her first scene, as the character introduces Ashitaka to the inner workings of Irontown, I was being sucked out of the story and focusing more on how Smith felt completely wrong not just for her character, but for the time period of the film.

The rest of the cast fits well into their roles; if there’s been one problem I’ve had with the English-language dubs, it’s that having American or English actors voice very obviously Asian characters in Asian settings is distracting and distancing. The easiest fix is, sure, watching the Japanese-language dub. I guess I’ve been stubborn to do so in the past because I assume or hope that if Walt Disney Pictures is willing to present an English-language dub, it’s a fairly decent re-appropriation of the original. Princess Mononoke, ironically a Studio Ghibli film that wasn’t distributed by Walt Disney Pictures, but Miramax Films back when Disney owned the distributor, has the best possible dubbing. There’s little distancing; instead, for the first time, finally I felt immersed.

Really, that’s what stands out for me in watching Princess Mononoke. I can’t say this applies retroactively to the other Miyazaki films I’ve covered on the podcast, but I can say that I get it now. At least for one movie, for one cinematic experience, I felt transported. The reverence that people have for Hayao Miyazaki, often referred to as the Japanese Walt Disney, made sense for the first time. His ability to create a new world while relating it to something we’re familiar with (even if none of us were alive in the Muromachi period in Japan), to introduce and build a set of characters to feel like actual humans, not props, is awe-inspiring. That Miyazaki made an animated epic—hell, that he even tried to make one—is equally impressive. Princess Mononoke is a great film, the first great film I’ve seen from Studio Ghibli. And frankly, even if we go through the rest of the Ghibli filmography on the show and I’m left cold, having one masterpiece from the studio is enough.