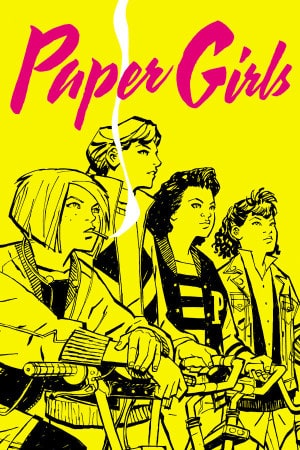 Only three issues in, Brian K. Vaughn and Cliff Chiang’s Paper Girls has already piqued intense fandom. Grounded in the recognizably familiar–1988 Midwestern suburbia–with its head in the clouds–aliens on dinosaurs, time travelers, mutant teenagers, Paper Girls engages both the heart and the mind. The four pre-teens on their paper route–Erin, Mack, Tiffany, and K.J.–are tough, mature, and can persevere through the toughest situations. They have to be, they’re paper girls. But they’re also only 12, so their innocence and relative naivety give them space to grow as characters. Littered with artifacts from the era, the comic is, in part, an authentic period piece, colored in the equivalent of retro sepia-tones for the late 80’s.

The characters speak in the parlance of the time, even explaining complicated issues like time travel through the framework of Peggy Sue Got Married and Star Trek III: The Search for Spock. The comic is exceedingly clever. With such strangeness, everything becomes a clue to unlocking the mysteries–the references to 80’s culture, the untranslated alien language, the anachronistic technology–and it’s great fun trying to put it all together. Where will it go? There is great anticipation in having no earthly idea. 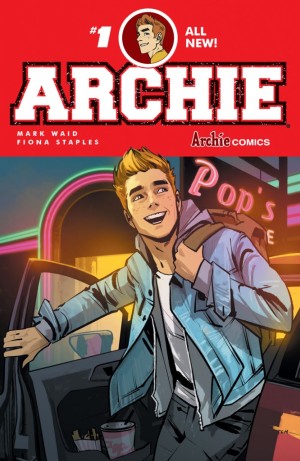 For the first time in close to 75 years, the Archie Comics group has treated us to a new Archie universe. One updated to keep up with the times.With Mark Waid securely at the helm of the new series along with superstar artists Fiona Staples (Saga) and Annie Wu (Black Canary), Archie has been driven to an incredible amount of success. The new series opens with Archie and Betty recently split-up over a mysterious incident that has the whole town talking. Meanwhile a newcomer, wealthy socialite Veronica Lodge has just moved to town.  The well written stories are still light-hearted and fun, but carry a more modern tone, wiping away the impression of Archie comics as “out-dated” or “quaint” With four issues out so far this year, the comics starring the teenagers of Riverdale are selling like wildfire, and bringing in a whole new generation of Archie fans and making Archie one of the best comics of 2015. 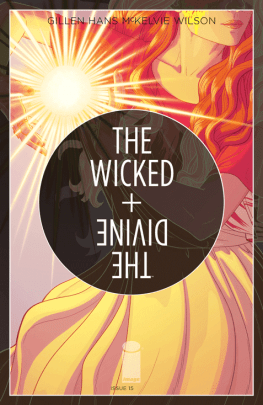 Entering year two, Kieron Gillen, Jamie McKelvie, and Matthew Wilson’s urban fantasy comic about gods, who happen to be pop stars went operatic with contemporary riffs on Euripides’ Bacchae and the myth of Persephone and then introspective with an arc that fleshed out some of the gods, including Amaterasu, Morrigan, Woden, Sakhmet, and finally Tara. “Commercial Suicide” was filled with meditations on topics, like harassment of women on the Internet, cultural misappropriation, the path from fan to creator, and even vampire fiction and substance abuse filtered through the lens of these larger than life, yet all too human characters with bits and pieces of Ananke’s plan of her young charges coming through the woodwork.

These single-god issues were a chance for other talented artists to put their imprint on WicDiv. There was Kate Brown’s manga-inspired battles between Baal and Morrigan after the tragic death of Inanna to the sad beauty of Tula Lotay’s Tara story, the radiant painting style of Stephanie Hans’ Amaterasu, the sharp lines of Leila del Duca’s Goth-tinged Morrigan story, and Brandon Graham’s sensual minimalism for Sakhmet. Matthew Wilson also reached another echelon with his coloring simulating the feel of a rave in the rhythmic WicDiv #8 where he used an ultraviolet spectrum palette as well as WicDiv #14, the “remix issue” that was entirely made up of rearranged panels from previous issues. (And Sex Criminals #11.)

WicDiv continues to be the comic of choice for fans, lovers, and dreamers and excels at dashing these dreams in the most tragic way possible. (See WicDiv #11 and #13.) 2015 was a pivotal year for the comic with some huge plot developments happening in the first part of the year while the back half was filled with character development and the deepening of the series’ themes.WicDiv truly captures the rhythm of death and rebirth found in superhero comics, musical careers, fandom, youth, and life in general. 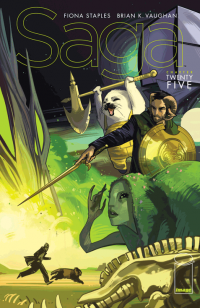 Without TV or movie deals, Saga has become a comics sensation The art pushes the boundaries of imagination, the story distills science fiction to its humanitarian qualities, and the world-building creates a galaxy unlike anything else. A century from now, Saga will be placed alongside classics such as Star Wars, The Martian Chronicles, and Billy-Boy Shakespeare. Despite the aliens and laser guns, Saga is a series about war, its harsh realities, and a promise not that war will end, but that the better qualities of humanity, love, happiness, and hope, will live on.

Fiona Staples continues to be a master artist, so much so that she gets first billing on the cover because, holy cow, does she deserve it! Speaking of covers, this new one is an improvement to the series. In the past 30 issues of Saga, characters and/or objects were placed in the foreground with a single, blank color palette in the background. Now, the covers include actual environments rich in detail. The interior art is just as eye-catching with fantastically designed yet realistic-looking characters, detailed scenery, and special effects that give big budget blockbusters a run for their money. The coloring is bright and vibrant like pop art; colors never mix and often highlight different parts of a character’s body and the clothes they wear. The result is a life-like quality that makes characters feel alive and animated, not just stiff illustrations. Brian K. Vaughan’s writing also remains top-notch, combining sci-fi, action, and drama as Saga continues to set the gold standard for science fiction comics.

See also  'D2: The Mighty Ducks' still resonates after all these years 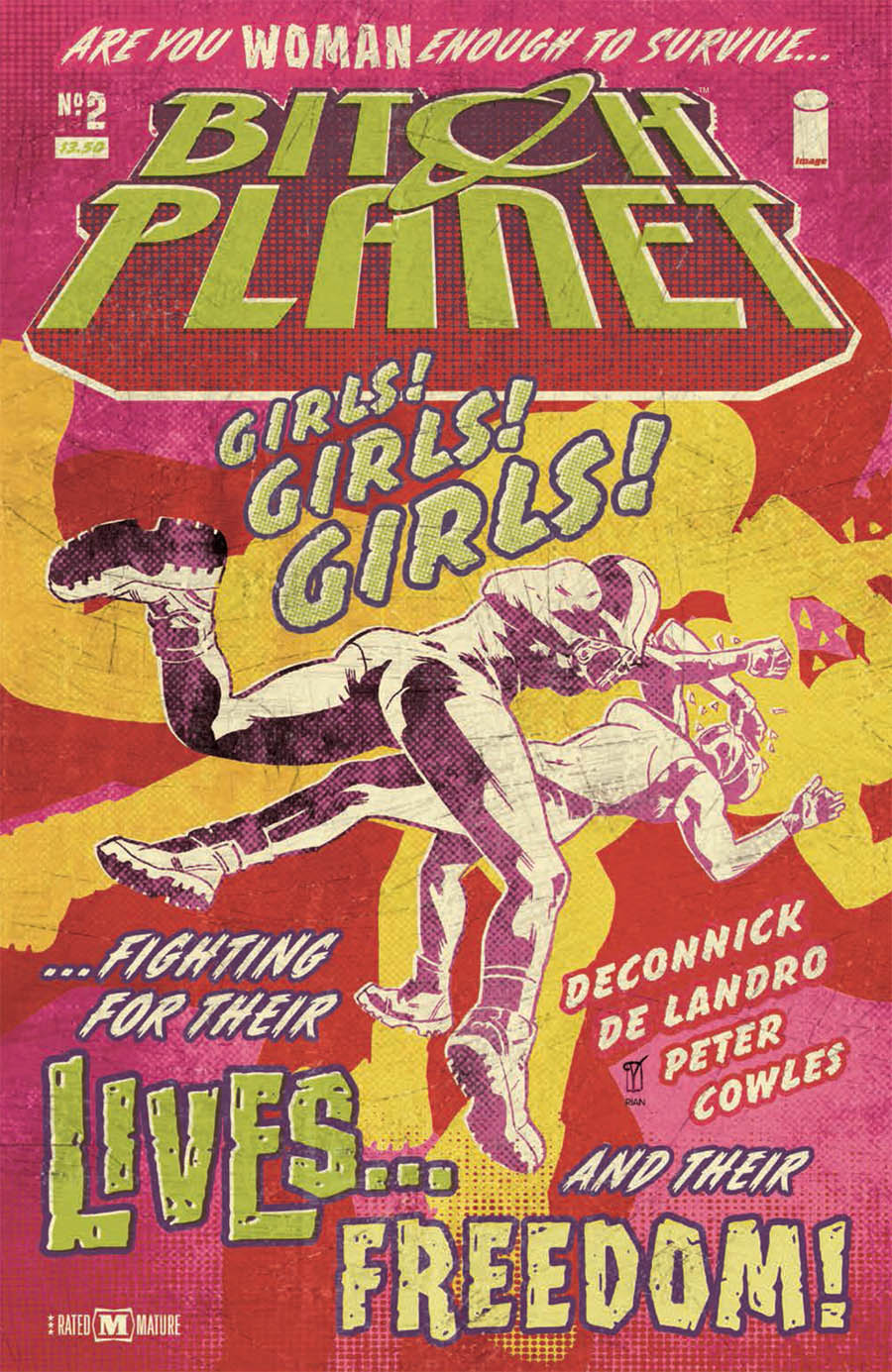 If there is any comic this year that could be described as a “cultural phenomenon,” Kelly Sue DeConnick and Valentine De Landro’s Bitch Planet is probably it. Often described as a hybrid of Margaret Atwood The Handmaid’s Tale, Orange is the New Black, and sci-fi exploitation, Bitch Planet is an unapologetic and inclusive feminist series that is as subtle as a brick to the face. Between DeConnick’s refusal to pull punches when it comes to the parallels this not so distant future draws with our present, De Landro’s expressive and often clever art, and Cris Peter’s searing colors, Bitch Planet is one of those comics that refuses to let up while you’re reading it and will make your blood boil while you’re sobbing for the characters when its done. Potentially while laughing at the back cover “ads” designed by Laurenn McCubbin.

The issue where the series truly seemed to hit though was #3, which featured guest art by Robert Wilson IV. Focused on fan-favorite Penny Rolle on her life before arriving on the planet, it was a stark look at the insidiousness of the society created by the Fathers (the world’s government that is literally the concept of the Patriarchy come to life) but also one of the strongest messages of self-love to ever come through comics.

If there’s one downside to picking up the series in trade, its that you miss out on the fantastic essays that populate the back matter of the book. Ranging from discussions on self-love to the need for intersectional feminism, it gives extra backbone to just what the series is trying to do. Not to mention all the new non-compliant tattoos that come in with every letters column. If it has that kind of power with only five issues so far, just imagine what Bitch Planet will do in 2016 with the introduction of “President Bitch.”