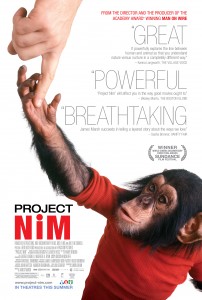 After his Maoist period, Godard commented that if cinema had the power to change the word, that time had most certainly passed. His cynicism has been mirrored by countless other filmmakers who have declared cinema capital-d Dead, a vague and fatalist proclamation against their chosen art. Our culture’s over saturation of media culture has probably doomed the medium from ever having universally inspirational power as some may have once hoped. Evoking an emotional response is rarely enough to push someone into action, and documentaries that hope to create change are met with a steep challenge.

Project Nim may be persuasive but it does not engage an overtly activist tone in its depiction of Nim, a chimpanzee raised in domesticity and eventually sold into animal testing. The filmmakers present facts and voices as a means of telling a story, allowing the audience to come to an “objective”, albeit heavily guided decision. Choosing to tell a story rather to present an issue will endear some audiences, but ultimately the film remains manipulative and one-sided without entirely substantiating their viewpoint.

The decision to stick so closely to Nim waters down the film’s effectiveness as the audience, though moved, is not guided towards a solution. We are shown that chimpanzees are not only intelligent, but self-aware, which makes Nim’s exploitation all the more cruel. This is an animal that should never have been in captivity to begin with, but the film does little to touch on that.

As a story, the film is mostly effective and almost always interesting. Nim himself, though, almost always takes a back seat to the seedy intrigue that surrounds him. Despite the film’s close eye on Nim, it’s the psychologies of the humans in his life that come through most clearly. It seems the people who surrounded him for most of his life were from some taboo pushing director’s cut of Peyton Place. Fans of soap opera and debauchery will find this entertaining, and it is certainly embarrassing for those involved.

Project Nim is ultimately a sad story of cruel exploitation and violence against animals. It manages to find the most innoffensive means of exploring the material, for better or for worse, and attempts to de-politicize a highly political issue. Though many will empathize with Nim’s plight, history suggests that few will do anything about it.